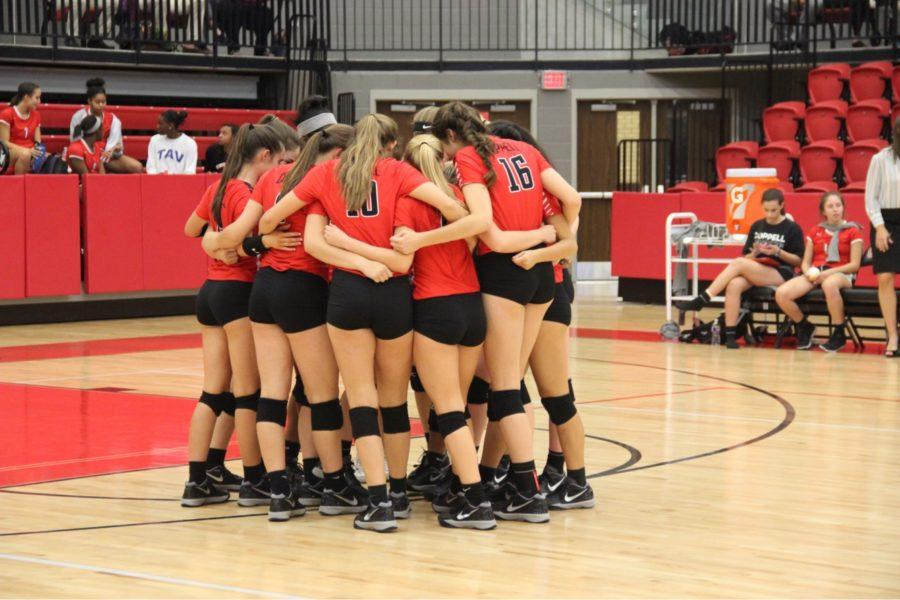 The Coppell High School varsity volleyball team huddled together to pray before their game against the Berkner Lady Rams. The Cowgirls took the victory and won all three sets last Tuesday in the CHS Arena.

The Coppell Cowgirls volleyball team triumphed over the Berkner Lady Rams, 25-5, 25-14, 25-12, last night at the CHS Arena in its seventh District 9-6A match.

In the first game, the Cowgirls (29-3 overall, 7-0 in district)  came out dominating and never looked back. The lead was started by freshman middle blocker Madison Gilliland on the front line getting several blocks and spikes. This was then backed up by a 10 point rally, including four consecutive aces.

In the second game, the Cowgirls seemed to let up a little, allowing the Lady Rams to stay within three points for most of the set. But, Coppell was once again able to pull through by utilizing their height advantage at the net. By doing this, Coppell got several blocks, putting them ahead.

In the third game, Coppell and Berkner traded points before the Cowgirls pulled away to sweep the match.

In the victory, Coppell coach Julie Green sees improvements needing to be made.

“We have our three [most important] games coming up. So for us, we have to really work on serving and not making hitting errors like [on Tuesday],” Green said.

The Cowgirls will play J.J. Pearce on Friday in Richardson at 6:30 p.m.