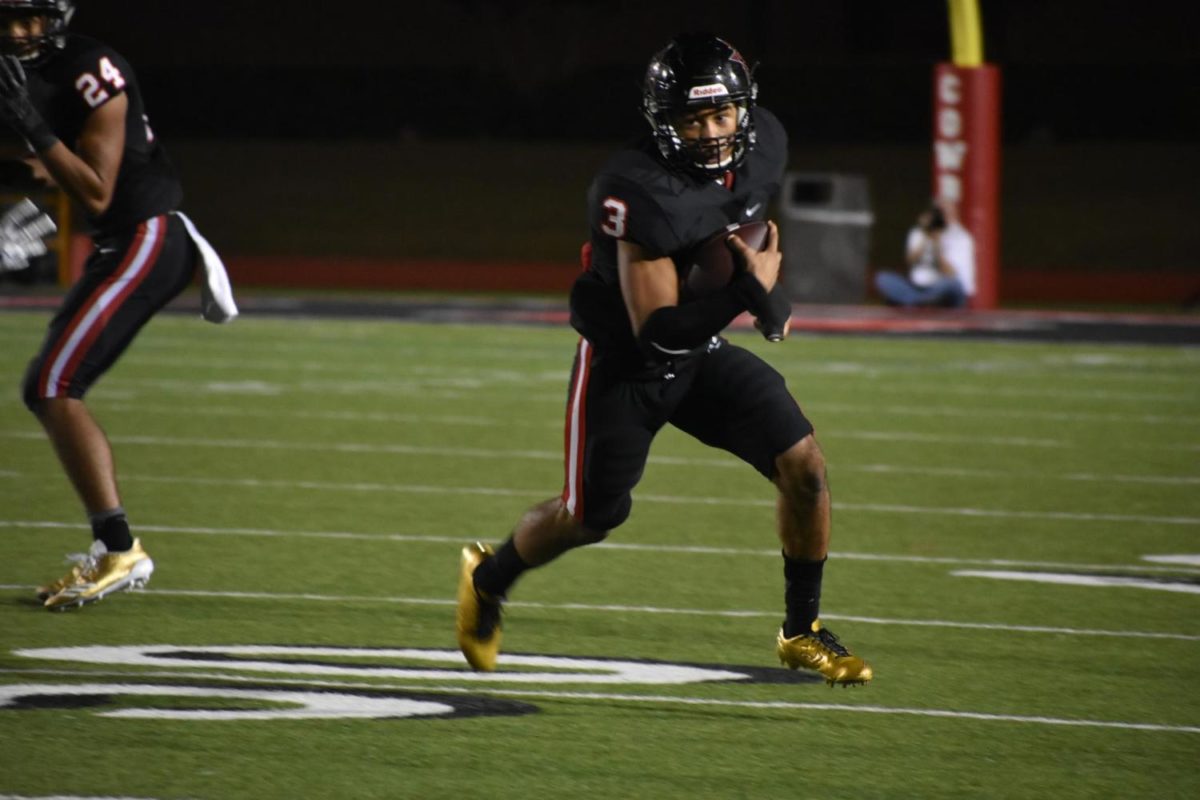 Coppell junior safety Jonathan McGill carries the ball during the first quarter of Friday night’s game at Buddy Echols Field. McGill had two touchdowns for the Cowboys as they defeated the Jesuit Rangers, 63- 41.

The Coppell Cowboys beat the Dallas Jesuit Rangers, 63-41, Friday night at Buddy Echols Field in commanding fashion on both sides of the ball.

After losing to Jesuit last year 41-10, the team showed up last night and made big plays throughout the game which resulted in the win.

CHS head coach Mike Dewitt is proud of the team this week, as it was able to dominate throughout the game.

“It came down to execution this week, we worked hard in practice and were able to win against a very good team,” Dewitt said.

“We were able to convert on downs to put touchdowns on the board this week, which lead to a big win,” McBride said.

Cowboys junior running back Ryan Hirt scored a touchdown with 3:17 left in the fourth quarter. The big run put the Cowboys up 22 points to secure the win.

In the first drive, McBride took the Cowboys (3-1) down to the red zone where  Hirt was able to score with a touchdown run. The Rangers answered right back with a one play, 75 yard flea-flicker for a touchdown.

McBride was able to connect with wide receiver Blake Jackson twice for touchdowns to put the Cowboys up by 14 points.

With 1:14 left in the first quarter, freshman safety KJ Liggins made a huge play on defense with the interception return to put the Cowboys up 28-7.

Cowboys junior Campbell La Puma, also had a interception return for 80 yards with 9 minutes left in the first half, which put the Cowboys up, 35-7.

With his third touchdown reception to Jackson, the Cowboys ended the half with a big lead against Jesuit (0-4). The halftime score was 42-14 in favor Coppell.

In the second half, however, the Rangers looked to put some points on the board. The Rangers were able to capitalize on the next three drives closing the lead to 49-34, eager to make a comeback. Then McBride found junior wide receiver Jonathan McGill for the 50-yard score, to extend the lead.

The Cowboys play the Richardson Pearce Mustangs on Friday at Eagle-Mustang Stadium in Richardson.