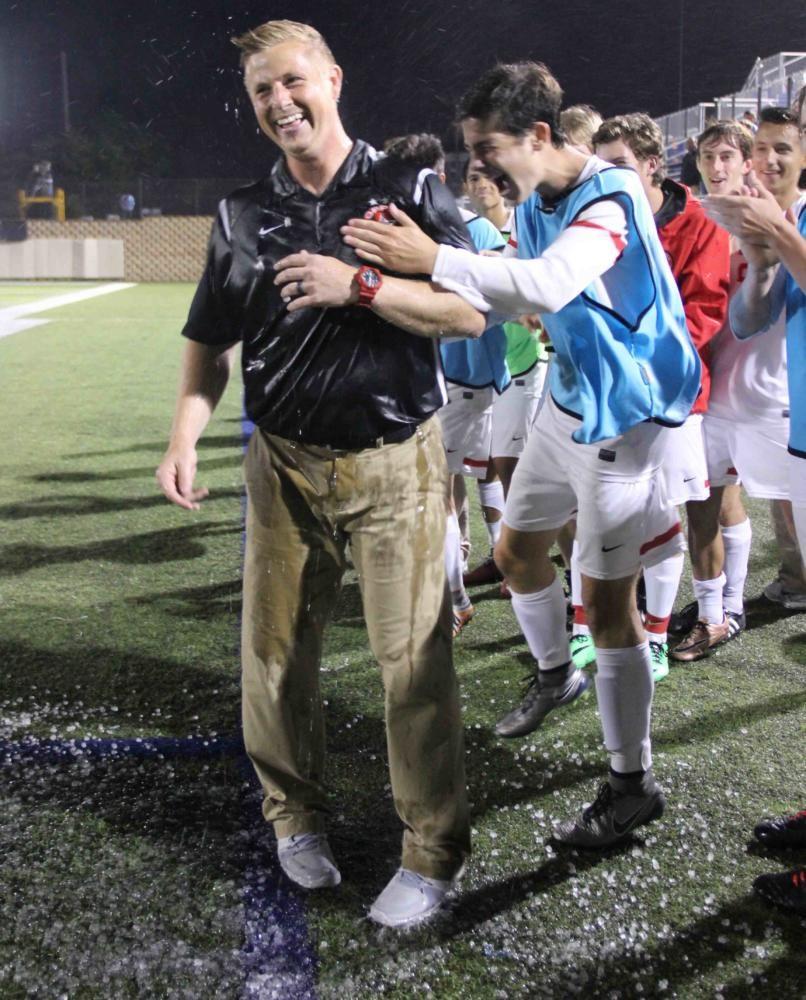 Coppell soccer coach Chad Rakestraw is embraced by junior forward Wyatt Priest after the UIL Class 6A state championship in 2016. Rakestraw will leave the Coppell program to coach at Flower Mound Marcus in the 2017-2018 school year.

Due to his family’s proximity to Marcus, Rakestraw cited this opportunity as one that will greatly benefit his family.

“What led me to [my decision], through a lot of prayer and conversations and time, was the proximity to my family,” Rakestraw said. “I live about five minutes from [Marcus High School]. It’s a place where my daughters go to school, in that district.”

This comes after Rakestraw added two state championships to the trophy case, winning in 2013 and 2016. Even more so, however, was his impact on the culture of the program.

“He was really into helping us become a better person and getting the most out of us not just as a player, but preparing us for the world outside of soccer,” junior defender George Ackling said. “That is something we all liked and respected about him as a coach, just wanting to better us as people, not just as players.”

Rakestraw’s ability to get the most out of his athletes transcended just success on the pitch. His ability to call upon players to play and act their best will be missed by many.

“He’s had a huge impact on me,” junior forward and Southern Methodist University commit Wyatt Priest said. “Coming into my freshman year, I wasn’t a standout… First of all, he got my character in check. I was getting in trouble, and he really set me on the right path. He also helped me with college. He helped me find the right fit, which was huge for me.”

In creating the proper culture, Rakestraw built a program that went through one of the most successful five-year stretches in Coppell sports history. His presence as a coach and a friend to the athletes allowed for a bond that carried the Cowboys to their status as a perennial championship contender.

“The best thing [Rakestraw] did was he created created a great culture and buy-in from those kids who also play club [soccer],” Coppell athletic director Joe McBride said. “Those kids still play club, but he got them to buy into their high school program too. He had great leadership skills in that way.”

However, success aside, Rakestraw’s fondest memories were away from the pitch.

“You look back, and you would think that you’d think about all the state championships and district championships, but that’s not what you think about,” Rakestraw said. “You reflect on the people you meet… It’s just the relationships built that you have to leave and hope that at some point you cross paths again.

“It’s the hardest professional decision I’ve ever had to make. It’s hard for anybody from the outside looking in to understand it. But the one thing I’ll never regret is getting more time with my family, my daughters as they grow up.”