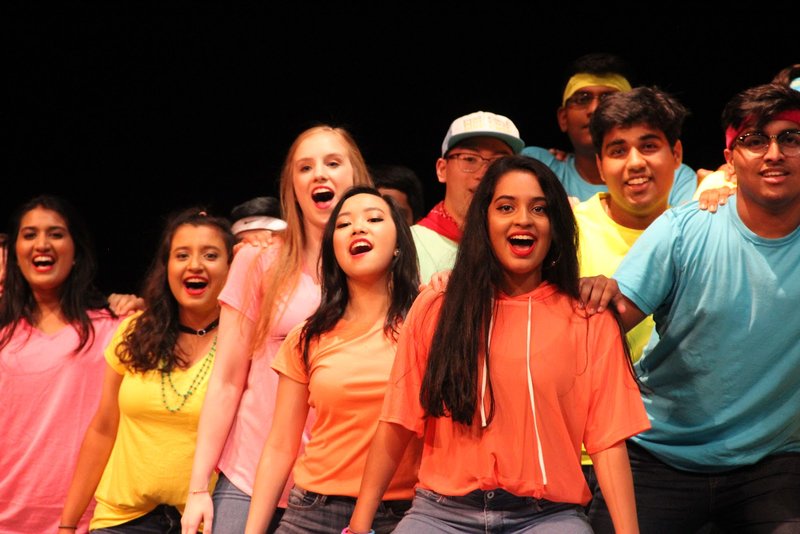 With the past two weeks crammed with standardized tests and AP exams finally being brought to a close, most students would think to spend their weekend relaxing in some form or fashion.

The Coppell High School Vivacé! show choir is an exception.

For the past month, these singers ranging from freshmen to seniors, have been preparing and on Friday and Saturday, they showcased their talent in the CHS auditorium through a medley of songs, dances and fun surprises along the way.

The group started on an upbeat note, singing and dancing to Sister Sledge’s’ “We Are Family,” getting the audience pumped up for the night ahead.

Next up, junior Marcus Reyes performed a heartfelt solo to Ellie Goulding’s “I Know You Care.” The song’s meaningful lyrics provided an important message through Reyes’ powerful vocals which came alive as the song progressed.

In various hues of red and pink, the entire Vivacé! group returned to the stage to sing “Put a Little Love in Your Heart” by Jackie DeShannon. In the absence of choreography, the audience got to enjoy the singer’s vocal talent and the song’s inspiring message.

With a drumstick in one hand, seniors Daniel Kim and Tara Park sang Us The Duo’s “No Matter Where You Are.” Sophomore Jacob Barnes’s acoustics created a sonorous sound that highlighted the seniors’ vocals.

Thirteen members returned to the stage with their dancing shoes on to perform a hip hop dance to a mash-up of different pop songs. The change in pace produced excited cheers and claps from the audience.

After a brief intermission, the group returned to the stage in neon pops of color singing, just as bright a song, Owl City’s “Good Time.”

“My favorite [song] is probably ‘Good Time’ because we all get hyped to it in rehearsal,”  junior first year Vivacé! member Mallika Sabhani said. “Vivacé! is a lot more pop style [than] some of the other choirs, so the fun part about [it] is we all get to experiment with new tones and new colors to our songs.”

Juniors Ashley Benhayoun, Christina Liu and Riya Mahesh sang “At the Ballet” from the musical A Chorus Line. The trio captivated the audience with their theatrical performance and the song’s enthralling plot line.

Once again, the group came back on stage for Eric Clapton’s “Change the World.” The singers sat at the front of the stage, with the seniors wearing their college shirts and taking turns singing portions of the song.

Following tradition, Vivacé! alumni joined their fellow singers for Styx’s “Come Sail Away,” smiling and laughing their way through the song. As the song progressed, singers left stage and came back on in an array of funny costumes, ranging from a banana to a sriracha bottle.

“[The song] ‘Come Sail Away’ was [my favorite] because we got to have all the seniors back,” junior third year Vivacé! member Marcus Reyes said. “It was a good, reminiscence of what I did last year. We just got to sing and feel like one whole choir again.”

Kim returned to the stage, this time singing The Cutting Room’s “September of ‘92” accompanied by CHS choir director Josh Brown on the piano.

To end off the night, the stage sparkled and shined as the group sang “Footloose” by Kenny Loggins, accompanied by buoyant dancing that exemplified how much fun the group had throughout the night.

“Their level of energy was great tonight considering that they went to school all day and some of them took tests today,” Brown said. “Each year, groups work with one another slightly differently but this group seemed to gel really nicely.”