Collins to take a gap year to travel to Europe and Australia, gain experience working with animals 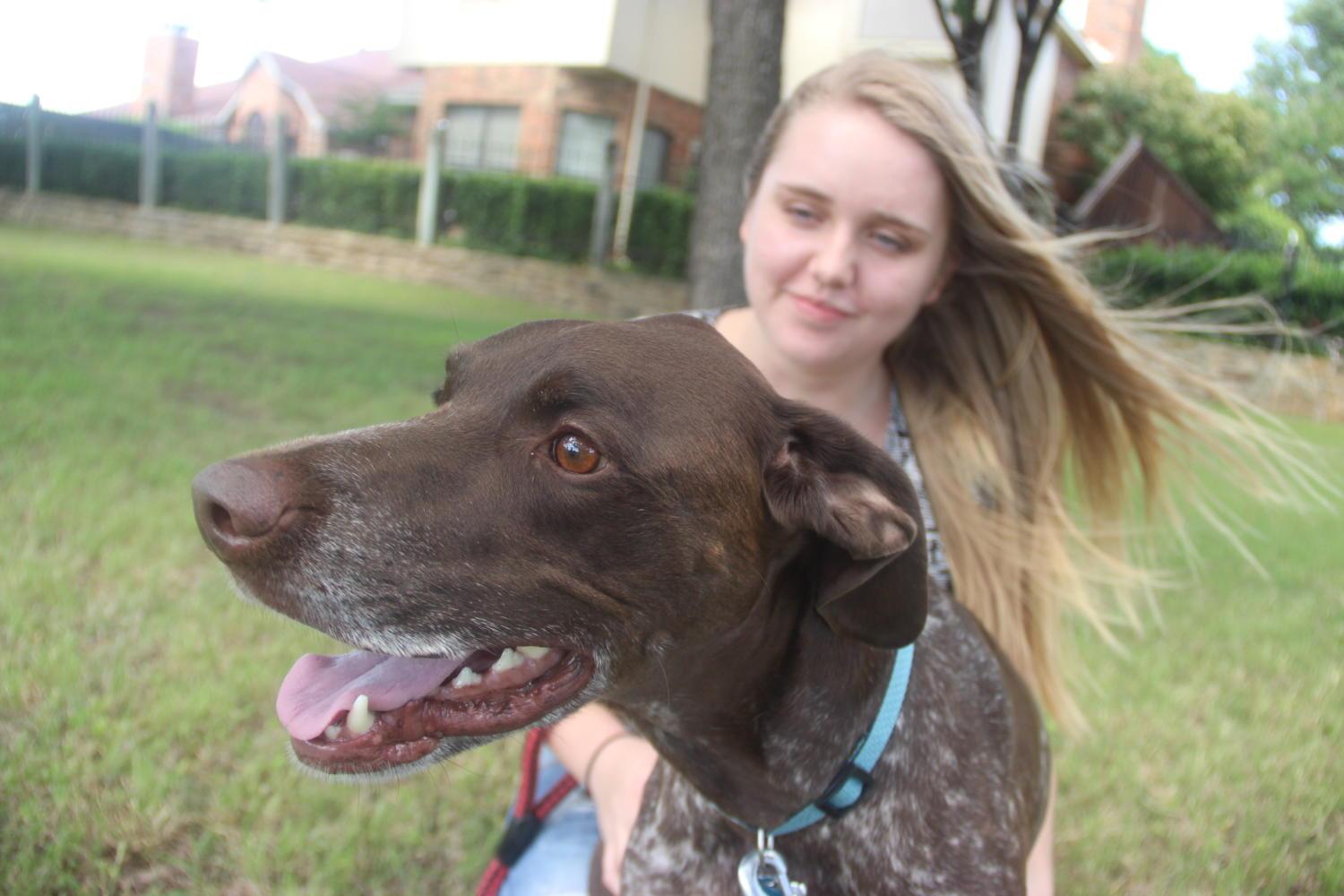 Coppell High School senior Lara Collins plays with her dog, a German Shorthaired Pointer named Sebastian, outside at Allen Road Park on May 1. Collins’ passion for animals has inspired her to take a gap year to travel through Europe and Australia to gain experience with animals for her future career in Captive Wildlife Care.

When the rest of the senior class was filling out college applications and stressing over their GPA, SAT scores and extracurricular activities, Coppell High School senior Lara Collins was planning her gap year in Europe and Australia to gain experience with animals.

Collins began to plan her gap year in December with a program called “Work Away,” a program providing people the opportunity to travel anywhere in the world and volunteer. The program has a website where host families can post requesting help from anyone around the world.

When Collins found a post she was interested in, she would contact the family and together they would work out the best month for Collins to come and volunteer. To Collins, this is a change in pace from her normal environment.

“I decided to take a gap year,” Collins said. “For all of my life, I’ve been doing the same thing every day, having the same routine with little variation. Before furthering my education, I decided that I needed a break just to relax from all the school work that I’ve been in. I’ve been in [International Baccalaureate] and [Advanced Placement] classes, which has been really challenging in the past few years. I thought that doing something that takes my mind off things would be good.”

As of now, her plan is to spend June and July vacationing to Austria, France, Germany, Netherlands, Spain and Switzerland with her family and Minton before living along in her family house in Munich. There she plans on going to language camp to improve her German and spend time walking dogs in a Munich animal shelter.

In September, she will go to Northern Germany and Lower Saxony and work on a camel farm taking care of camels, alpacas, llamas, zebras, kangaroos and emus for four months.

Then in December, she will return home for Christmas before going to Sweden in January to work with sled dogs.

Collins still has to work out the some of the details of her voyage but is very excited to spend the year with animals.

“A gap year is a great idea but it’s not for everybody,” Collins said. “Just know exactly what you want to do. I haven’t experienced it yet; I think if you don’t plan things out then it can be very difficult and frustrating when you go on it because maybe something doesn’t work out. I’m prepared for that. If a host family and I don’t get along so I have to go somewhere else, then I have a backup plan. I think planning is the most important thing and that you feel comfortable with what you’re doing and happy.”

Collins plans to study Captive Wildlife Care and Education at Unity College in Maine after her gap year and thinks having this experience will benefit her future.

“Having this as my career, you need a lot of experience,” Collins said. “Just doing well in class is not going to get you the best job. I thought that doing this gap year, I’m going to have so much experience with different animals and doing it now is actually easier than doing it after my four years in college.”

Collins’ interest in traveling throughout Europe and Australia stemmed from her parents’ adventurous spirits. In college, both her parents studied abroad and told Collins about the benefits.

“Both my parents have been pretty inspirational in this,” Collins said. “They’re big world travelers and they’ve always encouraged it in and we do a lot of great family vacations in the summer time. I’ve just grown up with a love to travel.

CHS senior Kaylee Minton has known Collins for four years and sees her parents’ adventurous side reflected in her.

“I think it’s a really good plan,” Minton said. “I know a lot of kids don’t want to go straight into college; it’s stressful. I know she’s been super adventurous. She and her dad backpacked across Iceland. She’s always new adventure and I think it mirrors her personality.”

Collins was born in Germany but moved to China and then to the United States in elementary school. At first, she lived in Florida but moved to Coppell in middle school and attend Coppell Middle School East.

“This opportunity is super beneficial,” Minton said. “I think it’s going to help her further her career and social skills. She’s going to learn a lot from the people she’s meeting. I think just overall it’s going to make her a well-rounded person.”

“Of course we talked about it quite a bit over a number of months,” Mr. Collins said. “It wasn’t a quick decision. Me and my wife are completely behind her in doing this. We’re really supportive. I think it’s going to be good. We’re really optimistic about it.”

He thinks taking a gap year is the perfect year for discovering who Collins in and get to interact with people who are as passionate about animals as she is.

“Like any gap year, your decision is to decide what to study in college,” Mr. Collins said. “There’s no question, she’s going to go to college in the future. She’s quite committed with animals so I don’t see any doubt. But this is a perfect time, we really want her to work with animals and talk to people in the fields, those who have completed their studies. A part of me is completely convinced that this is what she wants to do.”

Collins’s path of taking a gap year instead of immediately going to college might stand out amongst her classmates, but she is very excited about her path.

“It’s definitely different for taking a gap year but I think that I’ve made the right decision,” Collins said. “I think it’s cool because I’m going a different route than everyone.

“I do understand a lot of people don’t like the idea or wouldn’t choose it for themselves because they say, ‘oh, you take a gap year off and maybe you decide you don’t want to go back to school and you only have a high school diploma.’ I really don’t think that’s going to happen. I’m going to be more encouraged to go into school and get my college degree so I can finally go into working for animals.”

Transitioning from attending school in Coppell to traveling around Europe and Australia is a drastic change but she feels well prepared due to her involvement in the IB program.

“IB is a great program to help me prepare for this gap year because everything we have done in classes has been on an international perspective,” Collins said. “I think, especially history, I am understanding the different cultures and the history behind the places I will be traveling. I think that’s really cool. Also the students here are very diverse so I can talk to them. It’s just easier for me to adjust being in the IB program than with other classes.”