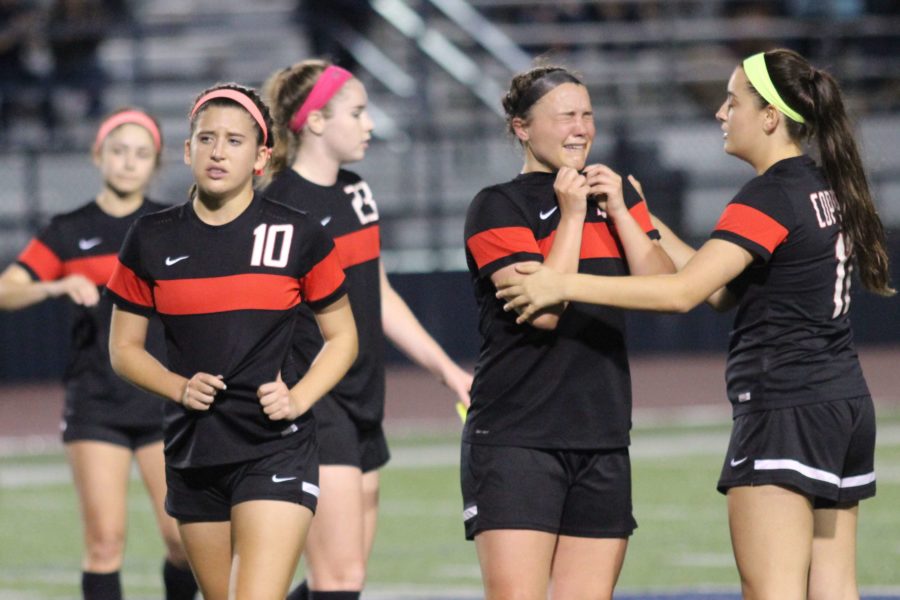 Coppell High School freshman defender Haley Roberson, senior forward Tori Teffeteller, senior defender Sarah Houchin and sophomore midfielder Mary Ziperman all accept defeat after their 1-0 loss to the Sachse Lady Mustangs at Ron Poe Stadium. After a weather delay that lasted over an hour, the Cowgirls could not pull out a victory in the Class 6A Region II quarterfinals.

McKINNEY – Try after try, the ball would just not go in.

Coppell senior forward Baylee Hux had crossed the ball into the box and into the heart of the Coppell girls soccer attack, yet after three shots from a mob of players, the ball dribbled out of bounds.

That effort seemed to be the mantra of the Cowgirls throughout the heartbreaking 1-0 loss in the Class 6A Region II quarterfinal match to Sachse: close but just not close enough.

“We really tried to get in there and into their defense,” Coppell soccer coach Ryan Dunlevy said. “We had some great opportunities that we just missed; we need to find a way to finish those opportunities in the future.”

The only goal of the match was off of a rebound from a corner kick, when Sachse defender Abby Weston netted a beautiful shot over senior goalie Maddie Weber in the 48th minute, giving the Lady Mustangs a lead they held for the rest of the match.

“We talked about it beforehand, it can take only one mental lapse to bust us,” Dunlevy said. “We fell asleep for one minute and the capitalized. It’s unfortunate, but it’s a learning experience for the girls coming back.”

The Sachse goal gave them momentum, which they carried for the rest of the half. The first half, however, the momentum was in the Cowgirl’s favor. Quality touches and a solid attack led Coppell (20-1-1, 11-0-1) to have confidence in their first half play, despite the 0-0 score.

However, whatever momentum Coppell had in the first 40 minutes completely died at halftime. Inclement weather that included pouring rain, hail and lightning extended the halftime to total an hour and a half long, longer than the game time itself.

“[The longer halftime] definitely just brought our momentum down,” senior defender Sarah Houchin said. “Even though we were against the wind, we still had the upper hand and we were attacking their defense. But with the break, it’s hard to come back from it. It gets both your mind and your body out of the game.”

The loss to Sachse was the Cowgirls’ first of the season, blemishing their unbeaten record. Another one of Coppell’s streaks that was broken was that the Cowgirls did not score a goal for the first time all season, even though they averaged over six goals per game in the last five matches, which included two playoff matches.

“We needed to remember to stay focused and be prepared,” Houchin said. “People would say we had a more easier route to get here, so we might not have been as prepared as we could have been to play a good team [like Sachse], but we should have stayed focused and stuck to our gameplan, and maybe we would have pulled it through.”

While the season may have ended earlier than what the team had hoped, the journey was one to remember for the Cowgirls. With a 20-1-1 overall record, four goals allowed all season and a share in the national rankings, this season, according to Dunlevy, can be used to set the team up for success in the future.

“It’s been a special ride,” Dunlevy said. “We were ranked at No. 1 in the nation at one point, and finished the season at No. 2. It’s been a great learning experience for the young players who came in and made an impact. Our seniors were great leaders, and hopefully those younger players can take what they learned from the seniors and make us better in the future and push us past the third round.”