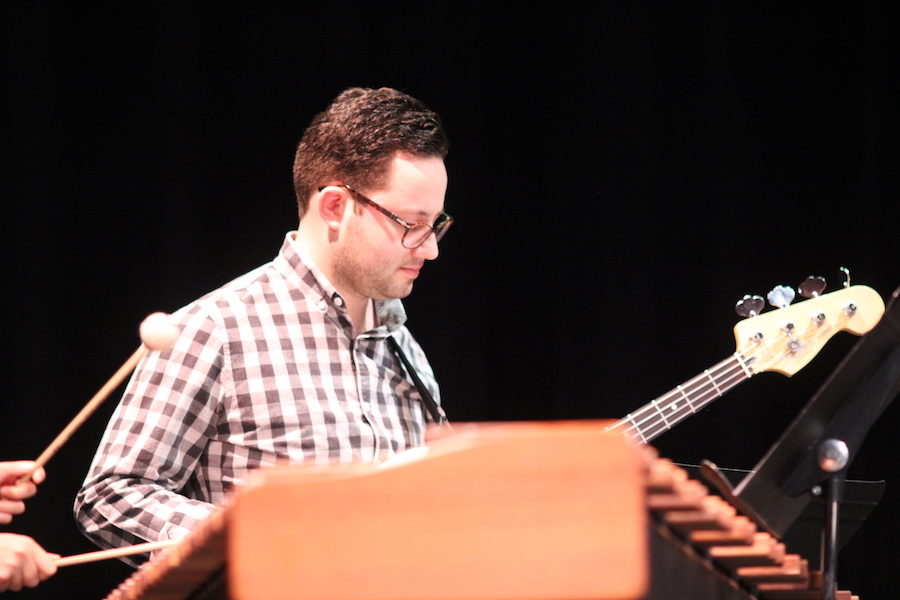 Grammy nominated Drumset Artist Michael D’angelo plays the bass guitar at the Purely Rhythmic concert on Friday night in the CHS Auditorium. He was featured in the CHS percussion’s performance of “Cornbread Funk” by Matt Ehlers. Photo by Hannah Tucker.

D’Angelo performed in several songs with both middle school and high school students throughout the night, playing not only the drum set but also the bass guitar and piano.

He is a graduate of the University of North Texas and has degrees in percussion performance and jazz studies.  He won Modern Drummer magazine’s Undiscovered Drummer Contest at age 12 and has performed at Carnegie Hall, among other achievements. In 2009, D’Angelo was a member of the One O’Clock Lab Band, the best jazz ensemble at UNT, which was nominated for a Grammy award that year for Best Large Jazz Ensemble Album.

D’Angelo and CHS percussion director Zach Scheer attended UNT at the same time and when it was decided that a drum set artist would come and be a guest performer for Purely Rhythmic this year, Scheer invited D’Angelo to guest perform.

“[I’m most excited for] playing with so many people,”  D’Angelo said prior to the concert.  “Every student in the district is playing so it’s going to be great to work with everyone and just hear the wide variety of stuff that we have planned when you put it all together.”

Similarly, students were excited for being able to perform with someone with such a seasoned  percussionists.

Ranjan was a featured soloist in the concert, playing a complex song “Dream of the Cherry Blossoms by Japanese composer Keiko Abe.

In a performance of “Rock and Roll”, the Coppell middle schools’ sixth grade classes played together, donning this year’s Purely Rhythmic T-shirts, showing unity among percussionists in the district.

An assortment of instruments were used in songs throughout the night from triangles to rainsticks, giving the concert diverse sounds and variety while staying within the percussion family of instruments.

For audience member, CHS sophomore Katelyn Canizares, it was the variety of music that percussion offers that made the concert enjoyable.

“The coolest thing about percussion is that it can stand alone,” Canizares said.

“With the percussion section, they can have their own concert and it’s not just one thing, there’s so many parts of it and it’s like it is a band program by itself.”

The concert ended with an energetic performance of artist Santana’s song “Yaleo” played by the CHS percussion ensemble and D’Angelo, followed by an immediate standing ovation from the full auditorium.