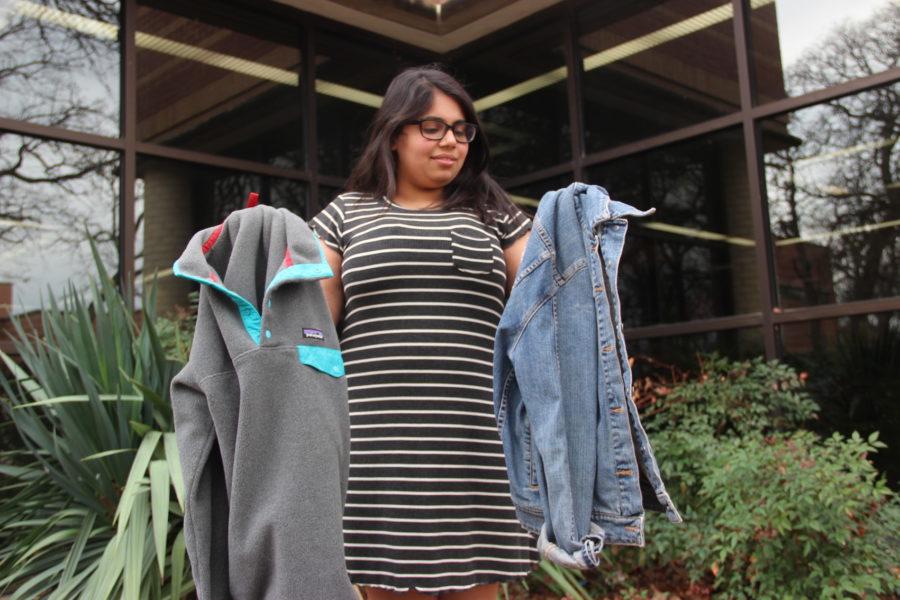 Coppell High School junior Farah Merchant decides between dressing up her outfit with a cute jean jacket or wearing a comfy sweatshirt to school. Dressing up can boost confidence and Merchant put that theory to the test last week.

“The first day is the hardest,” I think to myself as I sit on my closet floor surrounded by my dresses and skirts hoping to find something fancier than my normal dress, yet simple enough not to draw too many eyes.

As someone who has lacked confidence from an early age, I have always attempted to blend in by wearing jeans and a simple T-shirt. However, last week I decided to see the effects of dressing up on my confidence level.

Waking up a few minutes early in the morning and having to dress differently seemed nearly impossible. My head hurt and then there was the problem with attire. I kept asking myself, “What can I wear that would not attract any attention?” On the first day, I decided to wear a pink dress with sandals.

And though it was casual, I subconsciously felt like a magnet as people turned their heads to look at me. The distance between classes seemed longer and I was flustered for the majority of the time stressing about whether or not the dress made me look fat.

However, throughout the day, I gradually became happier. I cannot recall if it was the compliments or the fact that the day was almost over but by the end I was genuinely happy even when my sandal snapped in half during class.

The truth is, the dress was comfortable and people were not looking at me to talk about my body or insult me. They were simply looking because I looked different and stood out.

As the week progressed I became happier. Everyday, compliments surfaced from students – how nice my dress was or how good I looked in it.

Teachers noticed and smiled more. By the last day, I had grown accustomed to dressing up and enjoyed it.

I stood out to people in my classes. I noticed  when I raised my hand to answer a question, teachers called on me a lot more than normal. People also started being nicer and peppier. It was as though the entire atmosphere had changed and instead of having dreary and tired people around me, I was confronted by happy and cheery students.

In the end, I felt sad that I would eventually run out of dresses and have to resort back to everyday clothes.

However, the most important thing I realized throughout the experience is not that I gained confidence but happiness. I still felt nervous when I would walk into physics. I still felt as though I did poorly on the test or quiz I had in classes I did not study.

Dressing up did not necessarily boost my confidence. It was not as though I was dressed up and suddenly had the confidence level to believe in myself and solve all my problems. I still had to study as hard and was still worried about my grades.

The changes I noticed revolve around happiness and how good it felt. When I got home, I was not tired from the exhausting day but instead content and satisfied. I finished my work quickly and sleep earlier. I was able to study longer and stay focused more all because of the shift of energy and a different outlook.

Many think dressing up adds confidence but to me it simply made me happy. Though the start was rough, in the end I enjoyed and accepted the notion that dressing up made me stand out.

The happiness that I felt from dressing up is what made me more energized allowing me to put more effort in my class and most importantly, changed my outlook on everyday experiences.

The perspective I gained from the experience has altered my thoughts over dressing up and I hope to continue to do this in the future.