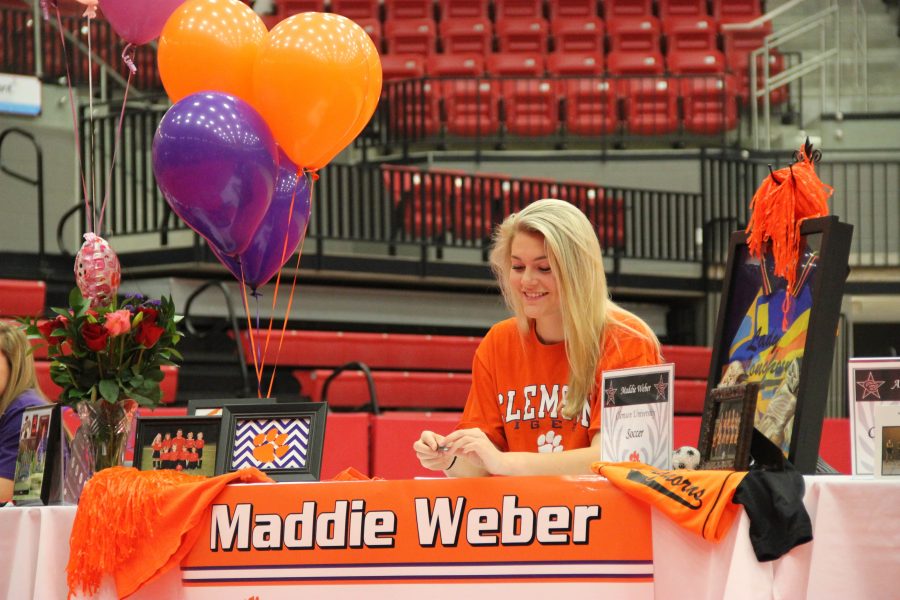 Coppell High School senior Maddie Weber cheers on another signee as they sign their letter of intent a on Monday morning. Weber signed on with Clemson University to continue her soccer career. In the CHS arena, 12 CHS seniors welcomed their friends and family to join them for National Signing Day.

“It just gives me chills, thinking about it.”

To say senior football player Kevin Madigan was excited to sign his letter of intent with Army West Point would be an understatement. But for him and two other Coppell athletes of the 12 who participated in National Signing Day in the Coppell arena, the signature means more than just getting the opportunity to play at the next level. It was the start of a journey of service to his nation.

“It’s something I take incredible pride in,” Madigan said. “My name will be on my chest, but I’ll be playing for my nation on my back.

“At the end of the day, everyone who is in a service academy or goes to a military school has one goal, and that’s to become a leader and lead the next generation of soldiers into battle.”

For Reynolds, the thrill of signing his letter of intent only increases his excitement for the future.

“When I verbally committed, it didn’t hit me at first,” Reynolds said. “When I got back on the lacrosse field for spring was when I realized, ‘Wow, I’m official.’ Now, since I signed, especially with this whole ceremony, it makes it that much better.”

With these four seniors leading the team, the Cowgirls have started 9-0 on the season. In fact, they still have yet to allow a single goal on the year, a feat unmatched at this point in the season even by the 2014 state championship team.

“It says a lot about the program,” Dunlevy said of the four signees. “It has a very prestigious history. A lot of talent has come through here, and they’re continuing the tradition. They represent Coppell well.”