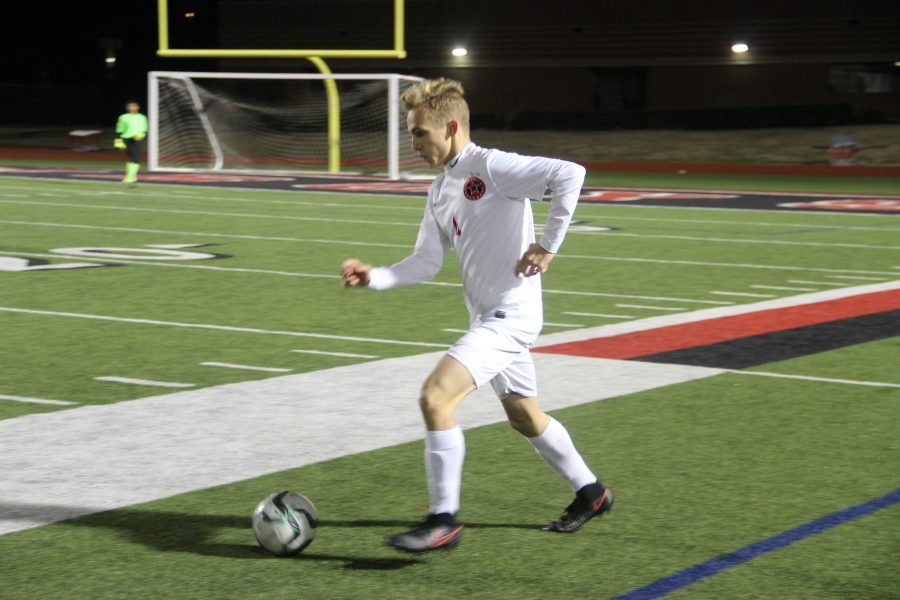 Coppell junior defender Josh Strong looks for an open passing lane in the first half of Coppell’s 3-1 victory over Richardson Pearce on Friday night. Strong and the defense rebounded from an early goal to hold the Mustangs scoreless for the final 74 minutes of play.

The Coppell boys soccer team is not used to deficits.

In fact, the team only trailed once in last years playoff run, falling behind 2-1 in the bi-district round at Mansfield before coming back to win 4-2. Yet even with their lack of experience facing adversity, the Cowboys battled back from a first half deficit to defeat Richardson Pearce 3-1 in their first District 9-6A match.

In only the sixth minute, senior goalkeeper Deep Soni was tested, and after he saved a shot but was unable to hold onto it, Pearce (6-2-2) was able to send it home off the rebound, taking an early 1-0 lead over Coppell (4-1-1). But as the game went on, Soni, who has been splitting minutes with junior Carlos Haro, displayed solid decision making as well as an ability to make tough saves.

“All you ask for is progress,” Coppell coach Chad Rakestraw said. “Deep progressed today. He was better than he was last game, and that’s all you can ask for. He came out a couple of times and cleared some balls off that were dangerous that we needed him to (clear), he made a couples saves from some shots from distance, so he did his job.”

Facing an early deficit, the Cowboys quickly responded. After a ball was put into the box, it bounced around enough for sophomore defender Jeremy Basso to head it into the goal, tying it at 1 only three minutes after the goal from Pearce.

After not being able to get into a rhythm before halftime, Coppell took its first lead of the night in the 55th minute, with junior forward Francisco Redondo taking a rebound off the post and punching it home.

“We knew, right when they scored, that ‘we’ll get back at it,” Redondo said. “We didn’t let our heads drop, we knew we were going to get back at it and get some goals on the board.”

Redondo continued his attacking success only 10 minutes later, scoring after a beautiful run by junior forward Wyatt Priest set up a perfect opportunity. The Cowboys would close out the win with solid defensive play from Basso and the others on the back line.

This win was significant for more than just being the first match in district play. The Cowboys are coming off a 2-0 loss to McKinney Boyd and a 1-1 tie to Jesuit, more territory they are unfamiliar with. And after the two previous match, they were able to answer with a commanding victory.

“To be honest, we’re not used to tying games or losing games,” Rakestraw said. “To come off a loss and then come in and tie your first game back, that was tough for us last week.

“To get that three points (Friday night) is big, it gets the ball rolling.”

Even as the district season is starting, the season as a whole is extremely young. Rakestraw is still moving guys around, creating different lineups to find who is “the best 11 that play together, not just the 11 best players”.

And while much progress has still to be made, a small step towards the future goals of this team was made here on Friday night.