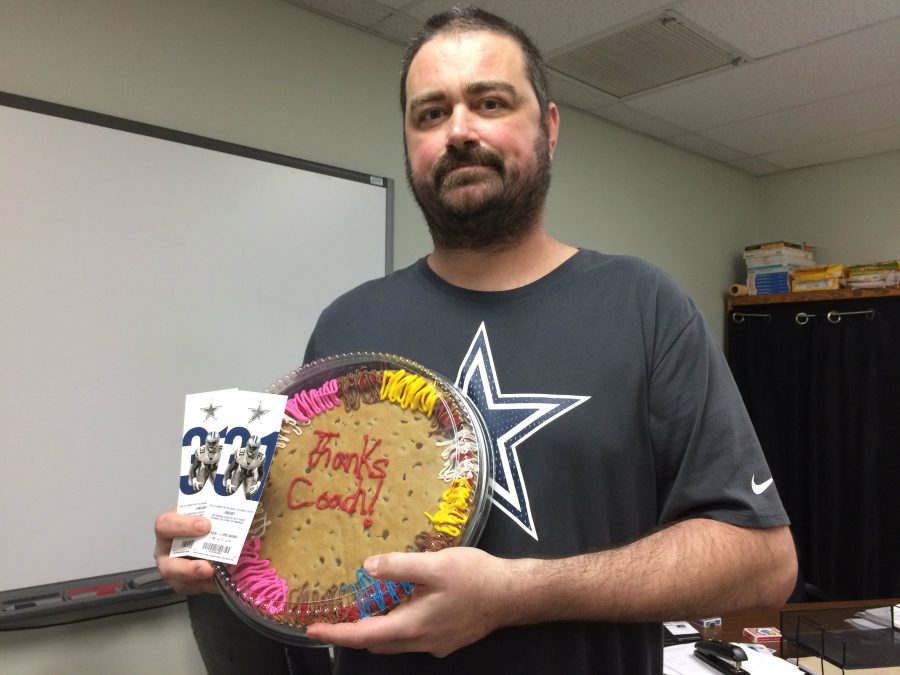 AP Calculus teacher coach Kirk Richardson shows off the Dallas Cowboys football tickets and cookie cake that his students all gifted him with Thursday morning in his classroom. As a lifelong Cowboys fan, Richardson was surprised when he walked into his classroom and saw the gift awaiting him.

In his 40-plus years as the ultimate Dallas Cowboys superfan, Coppell High School calculus teacher Kirk Richardson has been to exactly one game, a 24-22 loss at the hands of the Philadelphia Eagles in the December of 2013.

So when a large group of his students crammed into his classroom before school on Thursday to surprise him with tickets to Sunday’s NFC divisional playoff against the Green Bay Packers at AT&T Stadium, the sheer joy and astonishment that washed over his face almost knocked him backwards.

For the last several weeks, Richardson’s students have been planning this surprise, pooling money from kids in his classes. The effort, led by senior Akhilesh Pillai, even included some of his former students who wanted to help give back.

“We were thinking about giving him a present from the kids that have had him for a couple of years, and also past alumni,” Pillai said. “First, we were thinking about getting him one of those big teddy bears and then we realized that he was a big time Cowboys fan, and the Cowboys are in the playoffs this year, so he would love it if he got tickets to the game.”

With the help of students from each of Richardson’s class periods, Pillai spread the word to many of the teacher’s current and former students. In the end, around 65 pitched in $12 each for the gifts, which included a cookie cake, two tickets to the game and money for an Uber ride to the stadium and concessions.

“I was shocked,” Richardson said. “I was wondering, ‘what are they all doing?’ because I’m off first period. I walked in and they were all just standing there with the cookie cake and I was wondering, ‘do they think it’s my birthday?’

“When they told me, I just couldn’t believe it. I’ve been a huge Cowboys fan my whole life. I really don’t talk about it in class, they’re just very smart, and when I do say something, they picked up on it that I was a Cowboys fan.”

CHS teacher Kirk Richardson’s students all pitched in to buy him @dallascowboys tickets. His reaction? Priceless. (Via @mkarnold) pic.twitter.com/nEWLoT3zuI

“I happened to be walking down B hall, and one of the kids said, ‘he’s not here yet,’” Arnold said. “[CHS calculus teacher Jan] Bourg was telling me, ‘you’ve got to watch this.’ He is the most fanatical Cowboy fan you’ll ever meet, so it was really cool to see that experience.”

For many students, the price and time spent organizing something as big as this would be too great, even for the best teacher. Yet, the reason why Richardson’s students did what they did goes far beyond his teaching skills.

“He’s a great teacher,” Pillai said. “He has a certain way of getting through to the kids, and his teaching style is amazing. But what’s even better is how he is as a person. He’s always there for you, whether it’s school-related or not school-related. He’s always there to talk to you and he genuinely cares about his kids. We just wanted to show him that we care too.”

It has been a fulfilling year for Richardson, who was named 2015-2016 CHS teacher of the year. Even with that distinguished honor, Richardson sees as much if not more value in this gift.

The reaction to these gifts from Richardson’s students and former students has been overwhelmingly positive, as tweets in support poured in Thursday afternoon.

THIS. We have the best teachers!Thanks kids for showing your teacher how much he means to you. #CISDproud https://t.co/WUmw0vqAcF

COACH RICHARDSON DESERVES THIS SO MUCH!!!! MAN DOES NOT HAVE A MEAN BONE IN HIS BODY https://t.co/Y7SqMaiebk

Kirk is the greatest human on the planet. Well deserved https://t.co/sOHIiLOjb5

As a colleague in the education business, Arnold understands the weight a recognition of this magnitude coming from students carries.

As Aaron Rodgers and the Green Bay Packers head to AT&T Stadium on Sunday, Richardson will be amongst the 100,000 fans screaming for the first NFC Championship appearance for the Dallas franchise since 1995. As this entire season has come down to this win-or-go-home game, one question remains: Is he excited?

“You don’t even understand,” Richardson said, laughing. “If you understood how big of a Cowboys fan I am … I’m ready for Sunday to get here.”