Cowboys roll into playoffs with throttling of Richardson 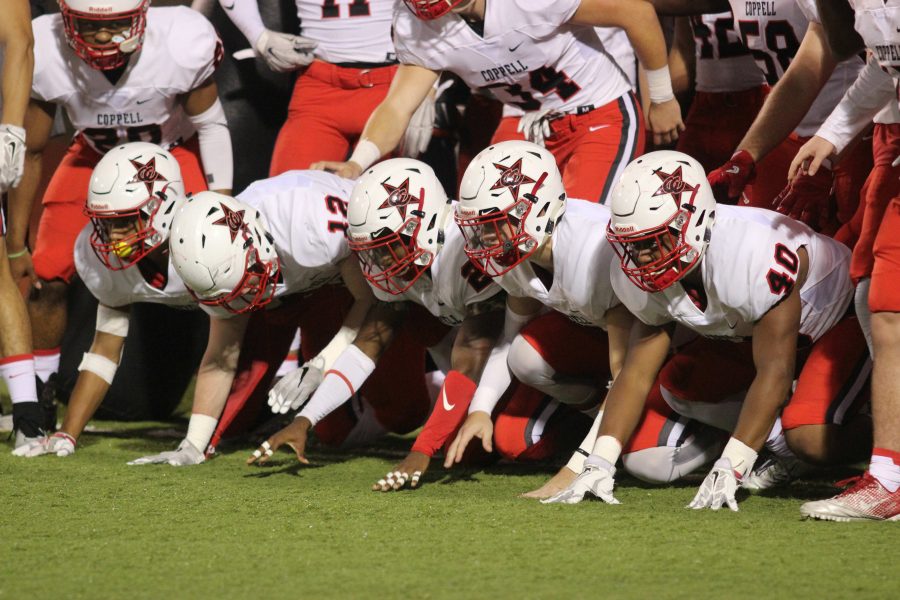 The Cowboys line up to run through the helmet prior to their 52-0 blowout of Richardson in the final regular season game. Coppell heads into the playoffs riding a six game win streak.

RICHARDSON — Walking off the field for the final regular season game this year, the Coppell football team (8-2 overall, 6-1 District 9-6A) had its playoff fate set. But the momentum it needed heading into next week’s matchup with 9-1 Rowlett is something they hoped to grab.

And on Friday, Coppell was able to capture lightning in a bottle, manhandling Richardson (0-10, 0-7) in a 52-0 road victory to head into the playoffs on a six game win streak. The Coppell defense, coming off of a game against Skyline in which it allowed over 400 total yards, had easily its best game of the year.

On Saturday, Nov. 13, the Cowboys come back home to Buddy-Echols field, where they will face the 9-1 Eagles of Rowlett in a Class 6A bi-district playoff game. Kickoff will be at 1:00 p.m.

This week, the defense allowed a mere 98 total yards and only 1.7 yards per carry, smothering the Richardson offense with great interior play.

“[Getting the shutout] was huge,” Coppell senior outside linebacker Holden Rupley said. “We’ve got momentum going into the playoffs.

“The coaches stressed all week that it was not about the team we play. We went out there and showed them that we’re a dominant defense and no one can mess with us.”

The defense did not allow Richardson to run a single snap from Coppell territory for the entirety of the game.

“[Getting the shutout] is big,” Coppell coach Mike DeWitt said. “It was the first one of the year, so the kids were excited about that. Anytime you can do that right before the playoffs, it’s a good thing.”

After only putting up 10 points last week, the offense found success distributing the ball between a variety of playmakers, with seven different Cowboys finishing with a touchdown. Junior quarterback Brady McBride bounced back from only throwing for 95 yards last week to finish 9-13 for 152 yards and three touchdowns.

“We were just trying to spread it around,” DeWitt said. “We wanted to try to get the ball to some guys and get some guys some points.

“Our kids executed the gameplan really well. We blocked well up front and on the perimeter, and the backs ran hard, and we made some plays in the passing game. The kids just executed really well.”

The Cowboys were able to rest a good portion of their starters for much of the game. In a game like this that has no effect on playoff standings, health is key for a team poised for a playoff run. The only injuries suffered from the Coppell team was to senior kickoff specialist Kevin Madigan, who suffered a dislocated shoulder and senior offensive lineman Joseph Krum who left the game in the first quarter with a shoulder injury.

Save these injuries and a few miscues early on, and this Coppell team left the field Friday night with the perfect avenue leading into the bi-district round of playoffs. If momentum truly does affect a team, then the Cowboys will certainly feel its impact next Saturday.