Making America Great Again, one vote at a time 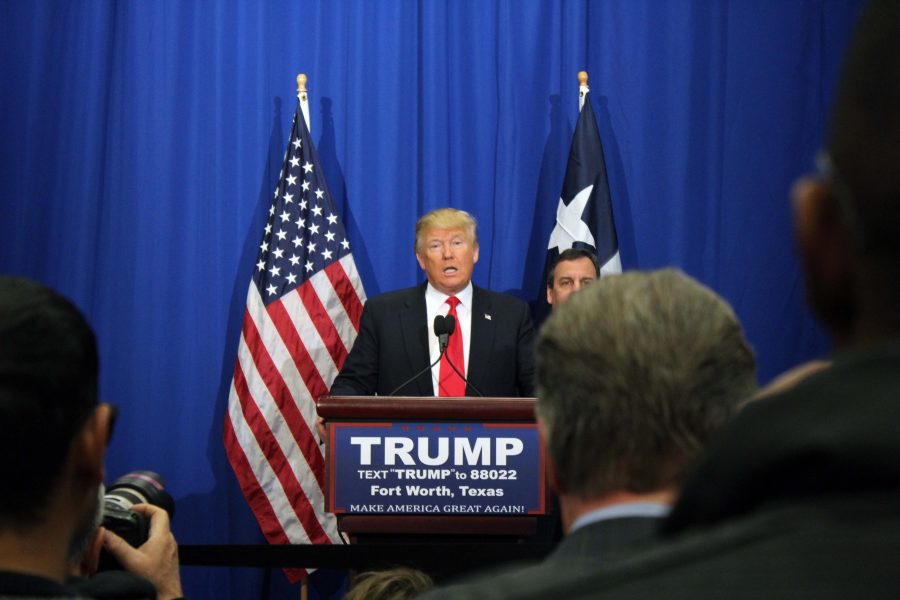 Republican Presidential nominee Donald Trump speaks in Fort Worth during a press conference in March. Photo by Thomas Rousseau.

Republican nominee Donald Trump is the best choice out of all the current running presidential candidates and I will be voting for him on Nov. 8.

Trump has had to fight equally as hard against the mainstream Republican Party and the Democratic Party and truly represents a man against the establishment. The GOP pitted its best Conservatives against Trump and every single one lost fair and square. More recently, a mass of mainstream Republicans such House Speaker Paul Ryan and Senator John McCain disavowed Trump publicly and even this had a less than substantial change in the polls.

The GOP has lost touch with the public and Trump has broken that stereotype, much to its dismay. While Texas Senator and former Presidential candidate Ted Cruz and others like him said, “I’m fighting for the Constitution,” repeatedly, Trump says, “I’m fighting for you.” That is what the American people needed so desperately to hear.

Democratic nominee Hillary Clinton is being advised on foreign policy by George Soros. Soros is an international billionaire who has made his billions manipulating currency and destabilizing nations. Clinton is the visible tip of the large, corrupt iceberg that promotes globalism and the self interests of the international elite such as Soros.

Clinton has adopted the Neoconservative ideology of military interventionism and will support more meaningless conflicts and senseless loss of life. Trump seeks an end to much of these conflicts which have been spurred on by the establishment’s illogical hatred for Russia and a desire for regional conflicts with the nuclear superpower.

The mainstream media has shown its true colors in this election cycle as little more than a thinly disguised wing of the liberal, globalist agenda. Trump hit pieces and scandals are calculated, fabricated and pushed incessantly by the biased media corporations. These corporations and individuals have been revealed to be in ties with the campaign of Clinton herself. Trump’s lack of support from these groups is his biggest endorsement yet.

Trump’s plan to secure the U.S. – Mexico border and enforce and tighten our laws on immigration has given a voice to Americans who have been pushed aside and put second when it comes to immigrants. There is no evidence to show that uncontrolled, mass immigration has any benefits to a nation and Trump is the first step towards bringing that truth to the forefront of political discussion.

Clinton is the physical manifestation of corruption and greed. She has done more than enough to get anyone else put in prison for the same crimes. Clinton and the Department of Justice were documented to be in collusion to cover her crimes and she showed criminal intent in hiding her emails from Congress and the public. Trump has pledged to deliver the American people justice where the current, corrupt establishment cannot.

Trump’s campaign is about more than just the election or who is president. It is a referendum on American democracy. A simple decision between who is really in control of this nation, a corrupt establishment with wishes to usurp democracy, or the American people.