What’s the buzz with West Nile and Zika virus? 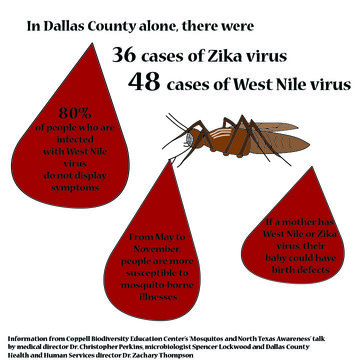 The mosquito transmitted viruses West Nile and Zika are beginning to pose a threat in the Dallas County, but chances are you haven’t heard of them until recently.

Originating in East Africa, West Nile and Zika are mosquito borne viruses that found their way into Dallas County area in 2002. Recently, these viruses have become a topic of conversation again after the highest outbreak in America in 2012.

According to Dr. Christopher Perkins, Dallas County Health and Human Services (DCHHS) Medical Director, at the “Mosquitos and North Texas Awareness” lecture, there are 48 cases of West Nile and 36 cases of Zika Virus in the Dallas County alone. Adults and children alike are worried about the possible implications of such mosquito-borne illnesses.

Melissa Arnold, an assistant principal at Coppell High School and mother of an 8-year-old daughter, is concerned when it comes to the protection of her family.

“I don’t know why, but [my family] tends to get bitten a lot more than other people,” Arnold said. “Going outside, I want my daughter putting on [mosquito] spray [because] I would feel awful if I did not protect her and she got bitten by a mosquito that has West Nile virus.”

Mosquitoes get West Nile virus by feeding on birds that are already infected. In search of  protein, these same mosquitoes bite humans for blood and end up infecting them in the process. This cycle from bird to mosquito to human continues on, infecting more and more people.

Similarly, Zika virus is spread to people through the bite of an infected mosquito. Mosquitoes become infected when they feed on humans who already have Zika and then these same mosquitoes transmit the virus to others.

Unlike West Nile Virus, Zika virus can be spread from person to person through proximity, blood transfusions and bodily fluids. Women who are pregnant or planning to be pregnant are the main victims of Zika, as the virus can spread to their unborn child, causing birth defects.

Coppell holds mosquito trapping in the fall to capture and test samples of mosquitoes in order to find out whether they test positive for certain viruses. If a mosquito sample comes back positive, the City of Coppell sprays the town in an effort to repel as many mosquitoes as possible. It is recommended that residents stay indoors during these sprayings, which take place between the hours of 9 p.m. and 5 a.m. after news of a positive test.

Residents themselves can adopt a number of preventative measures in an effort to minimize their chances of getting West Nile or Zika virus. Microbiologist Spencer Lockwood recommends eliminating all still bodies of water, indoors and outdoors, to get rid of the mosquitoes main habitat. Mosquitoes lay their eggs on the surface of stagnant water, so emptying out birdbaths, dog bowls, buckets and any other forms of standing water is imperative. Even just one inch of water collected after a rainfall is enough for mosquitoes to start multiplying in numbers.

With that being said, people must be cautious of over watering plants, as that surplus water can provide a potential habitat for mosquitoes.

“The first step towards prevention [is] getting educated [and] getting down the process,” DCHHS director Zachary Thompson said.

Before going outside, it is recommended to wear insect repellant and cover up with pants and a long sleeved shirt to limit the amount of skin susceptible to mosquito bites. Mosquitoes are most active from dusk to dawn, so limiting outdoor exposure during those times is helpful. It is important to spray the backyard as well, which can be done with misters, making it easy to diffuse insect repellant over a larger area.

Installing screens on all windows and doors ensures that mosquitoes don’t fly into your house. Mosquitoes are even more active in hotter temperatures, so keeping the house at a cool temperature helps eliminate the chance of transmission.

One of the most important preventative measures is to spread the word.  The more people that become aware of these mosquito borne illnesses, the more steps a community can take towards preventing the chances of an outbreak altogether.