Pink tax is the wrong tax

What it is, why it is and why it needs to go 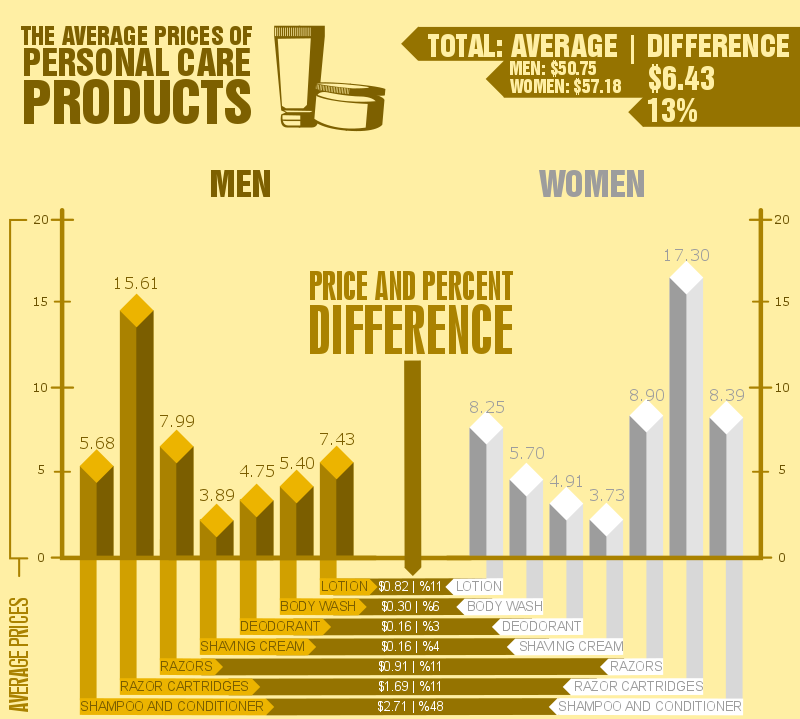 Walking down the aisles of the CVS on Parkway Boulevard, I found a bottle of my favorite brand of shampoo. With satisfaction in my eyes, I made my way to the counter until the product next to it caught my attention. It was the same brand of shampoo that I was buying, but it was specifically marketed to men.

The price for that bottle was $8.79 and two inches taller than my bottle, which was the same price and smaller. Tempted to buy the cheaper product, but desiring the quality of my choice, I was stuck. I soon noticed that this trend could be applied to other products as well.

This price hike does not only apply to toiletries like women’s shampoos and razors but can extend to almost all of the products and services that women purchase in regards to their self-image. This rise in pricing is known as the “pink tax”, with the reason being that most women’s hygiene products are considered luxury items – strange since they seem to be so necessary.

A pink tax does not necessarily mean that it is a tax. It is actually what economists would call gender discrimination pricing. There is no actual tax for feminine products, only a subconscious addition of pricing that is placed on these products and services.

“A California study in 1994 estimated that women effectively paid an annual ‘gender tax’ of $1,351 each,” said Anna Bessendorf in From Cradle to Cane: The Cost of Being a Female Consumer.

In 1996, California was the first state to attempt eliminating this difference in its “California Prohibits Gender-Based Pricing” bill.

The California legislation states, “Differential pricing of services is one of America’s last remaining vestiges of formal gender-based discrimination.”

However, legislation has done little to curb the pricing that continues to this day. Arguments have been made that producing women’s products relative to men’s is more expensive because of how products are made, yet there are still clear factors of gender-pricing discrimination.

“Three, it has to be the situation where buyers in one market can’t sell to buyers in the other [four] you need to have different elasticities. In words, it means that women have to be more desperate; they are willing to pay higher prices than men. If they are really price sensitive, this won’t work.”

Without these four factors, it is very difficult to actually prove that there is gender-based pricing discrimination taking place.

Companies such as American Apparel have sought to improve the issue by introducing unisex clothing. This eliminates any reason for gender pricing, however, dry cleaning is another service that women pay proportionately more for, so even clothing that may be priced similarly is defeated.

According to an Equity in Business Leadership study on women’s wages, “In 2015 women earned 81.1 percent of men’s salaries based on median weekly earnings for full time workers compared to 62.1 percent in 1979.” Although there is an increase, it is not 100 percent. Why are women paid less, and are yet expected to pay more?

Although it is difficult to uphold proper legislation on equal pay, it is society’s responsibility to speak out. This trend continues because no one seems to question it. Politics revolves around the public, and the public has to show interest for change to occur. If more people demand regulation for equal pricing for women by practicing the first amendment, then political action must take place.