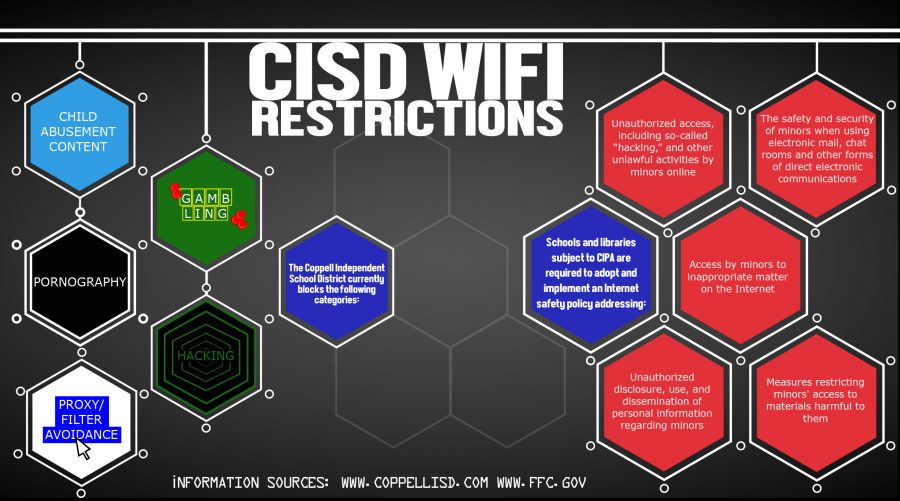 All Coppell High School students have been there before. You open your iPad or laptop to the day’s assignment and are met with the all too familiar red banded screen of a blocked website or video.

The Wi-Fi restrictions appear when a device is connected to a school network, and may carry on at home, in the case of school YouTube accounts. They restrict websites, videos and other material from student eyes during the school day.

The decision to restrict certain YouTube videos or block website URLs is not determined only by CISD itself, but is often imposed by federal law. The Federal Children’s Internet Protection Act (CIPA), enacted in 2000, has since then been upheld in different ways depending on the state.

According to Texas Business and Communications Code 35.101 to 35.103, public schools and libraries within Texas are required to have their computer service provider supply a link to filtering software on the first accessible web page of the service provider. Further, there is a $2,000 penalty for each day of failure to comply.

According to the Federal Communications Commission, the schools and libraries under CIPA must adopt an Internet safety policy that addresses access by minors to inappropriate matter on the Internet, safety with electronic mail and chat rooms, unauthorized access or “hacking”, unauthorized use of personal information and restricted access to material harmful to them.

However, according to the digital use and safety manual that can be found on the Coppell ISD website, the district Internet filter currently blocks sites under the following categories: child abuse content, proxy/filter avoidance, gambling, hacking and pornography.

There is also a blacklist of URLs specifically singled out by the district including popular social media sites such as Instagram, Facebook and Snapchat. Beyond that, district parents play a large role in the decision of what to block and what not to.

Once the categories are approved, it is no longer up to the district. Instead, they take it to a third-party filtering system company, who then weed out the inappropriate content based on the list provided by the district.

According to the district, the restrictions serve a purpose. They aim to shield students from inappropriate content to immerse them in learning during the school day. But when restricted categories keep being piled on, some students feel as if more sites are blocked than not.

“Textbooks are great, but they are already outdated by the time they’re finished printing,” Jasso said. “So, in the way we do education here in Coppell and at Coppell High School [the restrictions] have a negative effect because it slows things down. It restricts access.”

These general blocks can cause specific bans that can make it difficult to access classroom content. For example, a general block on religious and personal beliefs content can ban the URL to a history lesson on the Great Awakening, a general block on Chatrooms/Instant Messaging can ban an environmental forum for science class or a general video block can ban native speaking Spanish videos.

If teachers or students wish to get an issue resolved or want to express a concern, they are able to send in a technology ticket to the school. However, CHS Advanced Placement Human Geography teacher Andrew Patterson finds difficulties with this system.

“There’s been some [YouTube] clips that I’ve wanted to show that I couldn’t get access to,” Patterson said. “Supposedly I’m supposed to get access to it through my teacher account, but it’s still been blocked. That’s frustrating because there’s so many other things that are going on and I don’t really have time to send a help ticket for every little thing that I want to see.”

It is clear to Patterson why these restrictions are in place, but that doesn’t make his job any easier.

“I totally understand and support coming up with some program that prohibits sites and materials that are inappropriate,” Patterson said. “But at the same time, it’s really hindered my ability to just go with the flow. Videos that I’ve used in the past, even this year, will be blocked.”

Jasso has also noticed the disconnect that blocking has caused between students and the material they need to access for classes.

“It would seem like we might want to revisit the number of restrictions we put on videos overall,” Jasso said. “We could probably stand to look at the social media component as well. At high school specifically, lots of our teachers use Twitter as a communication tool or to provide [students] resources, articles to read, daily events, those kinds of things. And so sometimes that can be problematic.”

The category students encounter and have issues with most is religious and personal beliefs. Many classes research subjects that fall under this category, whether it be symbolism, history or cultural studies.

“I think that’s one of the freedoms that we’re supposed to have as a United States citizen, freedom of religion, and for that to be limited, I think that that is limiting that perspective in education.” Patterson said. “Specifically for AP Human Geography, we talk about religions, and it’s an important piece of the education to look at opinions and backgrounds of religion. If we’re limited with that, then that’s probably a conversation we need to have about gaining access to that again.”
According to a list provided by CISD detailing who the religious and personal belief category, those blocks should only be affecting the elementary school level, but as students and teachers at CHS have found, that is not the case. When asked about the subject, Farsaii denied knowledge about high school level religious restrictions.