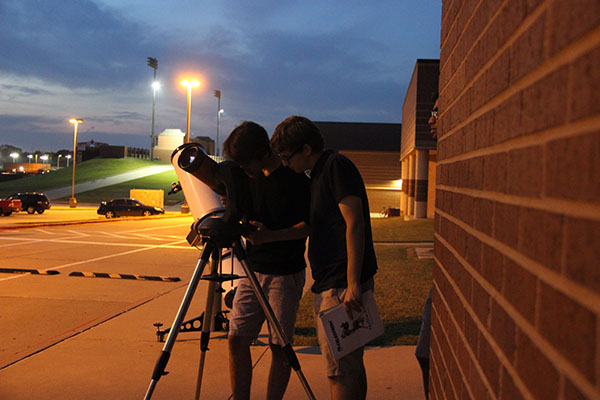 Coppell High School students look through the telescope the science department has named ‘the Beast’ on Sept 21 in the CHS parking lot. Astronomy students taught AP Earth and Science students along with AP Environmental Science classess about different topics relating to the celestial sphere at Mrs. Barnes' Star Party.

As the sun sets over the Coppell High School parking lot, the smell of hot dogs on the grill and the humidity fills the air. Astronomy, Earth/Space and Environmental Science students gather for the first of many Stargazing Parties of the school year.

Despite the cloud coverage, Astronomy s  tudents blew away their audience while presenting topics such as constellations, nebulae and the app SkyGuide, an app that allows you to see all 88 constellations in space from the comfort of home. Throughout the night, the ESS and Environmental Science students moved from group to group, filling out reviews and taking in knowledge that they had never heard before.

“They have been studying the night sky since the first day of school,” Star Party host and Astronomy teacher Angela Barnes said. “Their goal is just to share their knowledge with as many people as they can.”

Students gathered around presenters in the CHS parking lot and were able to experience an interactive, hands on learning environment of a subject that is not notably taught in a typical science class.

“I think in a setting like this, where it’s relaxed and you’re having fun, it’s easier to learn,” Barnes said. “There’s no pressure to know something so quickly, and you’re learning from your peers.”

Although some student audience members were there for a grade, fellow Environmental Science teacher Holly Anderson agrees that the engaging, easy going atmosphere of these presentations allows students to take away more from the Star Party then they would in a classroom setting.

“[I want] for my students and the ESS classes to get out here and not only learn about astronomy, but to understand a topic in an experience that they normally wouldn’t be able to,” Anderson said.

Even after the hot dogs and chips had been eaten, students were all in agreement that there is nothing wrong with a classroom, but getting out of it as much as possible can change your entire perspective on learning.

“I learned a lot and it was really engaging because I was able to learn more than I would in a typical classroom,” junior Nihar Tatapudi said. “I was able to experience something so much more interesting and it makes you wonder why don’t we have class outside like this more often?”

Be on the lookout for the next Star Party on Oct 24.