Not one, not two, well actually just one

The opportunity to be prominent in multiple sports is gone 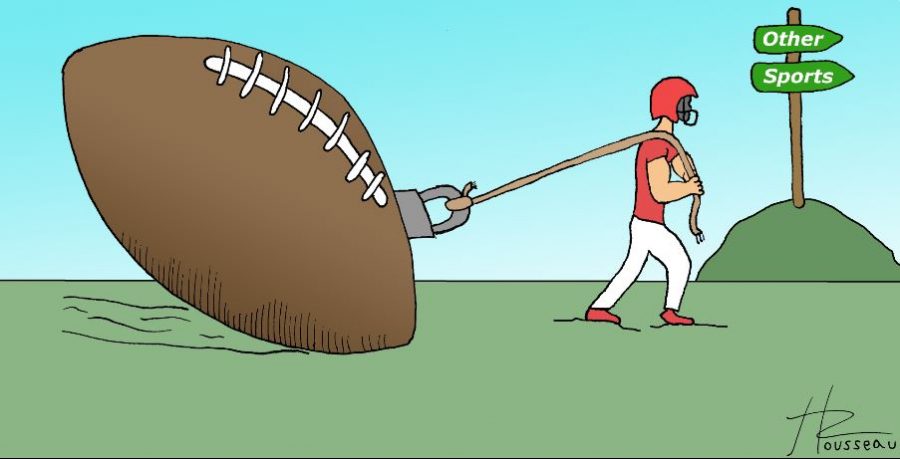 High School athletes are weighed down by one sport, preventing them from exploring other options.

The multi-sport star is dying.

Thirty years ago, if you walked into an American high school, you would see girls with perms (thank God those are gone) and boys with letter jackets. While the perm is no more, the leather jacket is still a staple in society, yet there lies only one difference.

This coveted jacket signifies when an athlete has logged viable playing time on a varsity team of any sort, but I would be willing to bet that nine out of 10 high schoolers that don this iconic garb only have a single patch.

In the past, this would not have been the case.

“It’s a negative thing,” Coppell basketball coach Kit Pehl said. “The reality of [athletes] having an opportunity to have a full scholarship in any one sport is unbelievably slim, specializing in one sport ends up diminishing their [athletic] experience at the high school level because they chose at the ripe age of 10 that they only play one.”

One could point to the size of the school, and claim the fact that there is just too much competition for excelling at more than one sport to be reasonable. But the fact of the matter is that it is often predetermined before a student even steps foot on a high school campus that 100 percent of their high school athletic career will consist of one sport.

“All sports are year round, it never quits,” Coppell Middle School East assistant principal and former Coppell High School coach Brandon McGill said. “It is the same for every sport, any sport that you compete in is year round, even down to the youth level.”

For my sports career, the decision to specialize revealed itself when I was 10. I had to choose between playing baseball or football because in third grade, I could not bear the workload of school work, and up to five different practices in a week with games littered in the schedule as well.

In reality, I definitely could have kept playing both, yet I can promise you that had I not decided to solely play baseball, I would absolutely not be a high school athlete because the time commitment and the stress left no room for the whole reason of any sport: fun

Out of four CHS staff members, only two names come up when I asked the question, “Who from Coppell would be considered a multi-sport star?” Two athletes out of thousands since the year 2000, so yes, there are your outliers who just happen to be so gifted that they can pull it off.

“Football, baseball, basketball and track and field,” CHS history teacher Kevin Casey said. “Hunter Wall could do it all, he had 12 different varsity letters when he graduated in 2000. Josh Fink the past four years is probably the only athlete that even comes close in my mind.”

Let’s say that this piece motivated you to go out and make a change, so you decide to play two sports with the intention to surmount the new societal norm. There are many problems you would face between the time commitment and mastering another sport, but the problem of specialization has made this crossover virtually impossible.

The fact that, “sports never quit,” has risen the level of each sport so greatly that without years of hard work and hundreds of hours, it’s just a matter of time before you are weeded out before getting that exalted second patch on your leather jacket.
So when it comes to me saying that you cannot do it, don’t hate the writer, hate the game.