“If there is a word I can leave you with tonight, it’s transformation.” 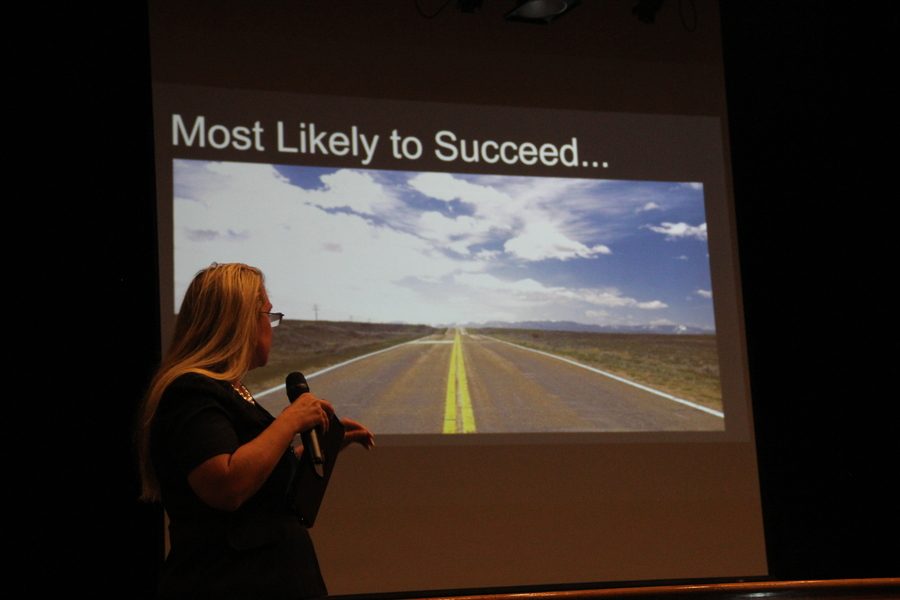 Coppell Independent School District Executive Director of Teaching and Learning Deanna Dynis introduces the film “Most Likely to Succeed” in the Coppell High School auditorium on Tuesday after her talk on the four tenants of a graduate from CHS. “Most Likely to Succeed” is an award-winning documentary about the lives of students and teachers in one unique teaching situation.

On Tuesday night, Coppell Gifted Association brought to light the new demands of our current and future workforce through a presentation held at Coppell High School.

The future of students does not demand kids with expert knowledge on content, but rather students who can implement creativity, interpersonal and intrapersonal skills into their work. The CGA delivered a presentation on how its goal is to shape students who can exceed the demands of the future.

“My daughter loves to write fictional stories,” said Jags Porandla, a parent of a fifth grader at Pinkerton Elementary School. “Her goal for this year is to write a book, and this program is helping her to achieve that.”

This is just one story out of many that depicts how the CGA is guiding students to follow their passions and learn outside the realm of the traditional classroom. In contrast to constantly doing bookwork and memorizing times tables, CGA ensures students in Coppell ISD are bending the boundaries of their creative potential and pursuing their interests.

“The services we are providing through the Gifted and Talented program are not about attaining higher grade point averages or taking more Advanced Placement/International Baccalaureate classes,” Dynis said. “Instead, they are about pursuing passions and taking a deep dive into what challenges students.”

CGA and CISD want to transition away from quantitatively assessing students.

According to Dynis, the current education system has a major drawback in that students are seen as only numbers – their GPA, their standardized test scores and their ranks. Dynis recognized that this is an issue and acknowledged that “numbers can’t just be assigned to human beings.”

CGA introduced the concept of “soft skills”. These skills include critical thinking, strong work ethic, having confidence when speaking and collaborating in groups. These are the skills that CGA wants to incorporate in its curriculum. This is where the departure from established norms begins.

The presentation continuously emphasized how the future demands people who can think creatively. Workers with route jobs are now being replaced with technology and will continue to be replaced at a more rapid speed with the coming years. CISD wants its students to avoid this trap by shaping kids who will later take high skill jobs involving a strong presence of human capital.

The audience of the event extended further than Coppell citizens and parents. Thiruneela Athysivam, a Lewisville ISD parent, attended in order to learn how to better guide his children.

“Any ideas are open to me,” Athysivam said. “I attend such presentations to take inspiration and guide my children.”

The reception of this lecture reached the parents of students in Coppell and beyond. CGA’s thought provoking plans are being put into action now with the goal of shaping CISD’s future.