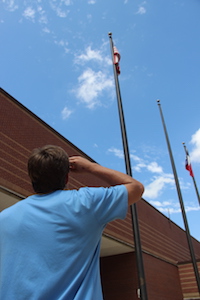 Coppell High School junior quarterback Brady McBride salutes the American flag. "Standing up and respecting our flag is important, we should be proud of our country and show some respect towards it," McBride said.

By sitting quietly on the sidelines of his playing field,  Colin Kaepernick was refusing to remain silent.

With the recent flurry of accusations directed towards the football player’s actions and the shaken definition of national pride throughout the country, Kaepernick’s true intent for his protest has yet to become clear.

“I refuse to show pride in a flag for a country that oppresses black people and people of color,” Kaepernick told Steve Wyche of NFL Media.

Through his actions, Kaepernick believes his silence shined light on the racial inequality and violence seen in our world today. Such expressions of protests provoke discussions about national pride and team expectations in the world of high school athletics as well.

“If [Kaepernick] is claiming that that’s the stand he’s taking and that’s what he’s wanting to bring to life, that obviously is a worthy cause,” CHS head football coach Mike DeWitt said.

While DeWitt agrees that standing up for one’s beliefs is a good thing, he thinks Kaepernick’s decision to stay seated is disrespectful to servicemen and women.

Coppell High School students and athletes have mixed feelings about this issue.

“How the world is now, and what the national anthem stands for, I think he was correct to take that stand,” CHS senior and varsity football player Timmie Heard said, “He really had a right to do what he did.”

Regardless of his true intentions, this particular expression of solitude with the Black Lives Matter movement is met with a mixed public response.

While several athletes stand in solidarity with Kaepernick, his actions have not fared well with some politicians and citizens on either side of the political spectrum. The discussion of expressions of protest while preserving national pride and honor is increasing on and off the field of professional football.

“You can’t speak out against injustice and dishonor another group of people,” DeWitt said.

CHS holds its students to high standards, standards which put respect on a high pedestal.

“CHS has a really strong tradition of military service and service to our country,” CHS Principal Mike Jasso said. “So out of respect to former CHS grads or alumni, participation would be my hope.”

Several CHS graduates have entered the military, or devoted their lives to servicing our country. In respect and honor of those who have done so, or are planning to, campus leaders think the national anthem holds a lot of sentiment.

“We live in a great country,” DeWitt said. “And I think there’s a lot of other ways he could go about the presence of injustices he feels, without disrespecting our military.”

Although there is no written school policy which mandates participation in the national anthem, the act is “not so much an expectation, it’s our culture,” DeWitt said.