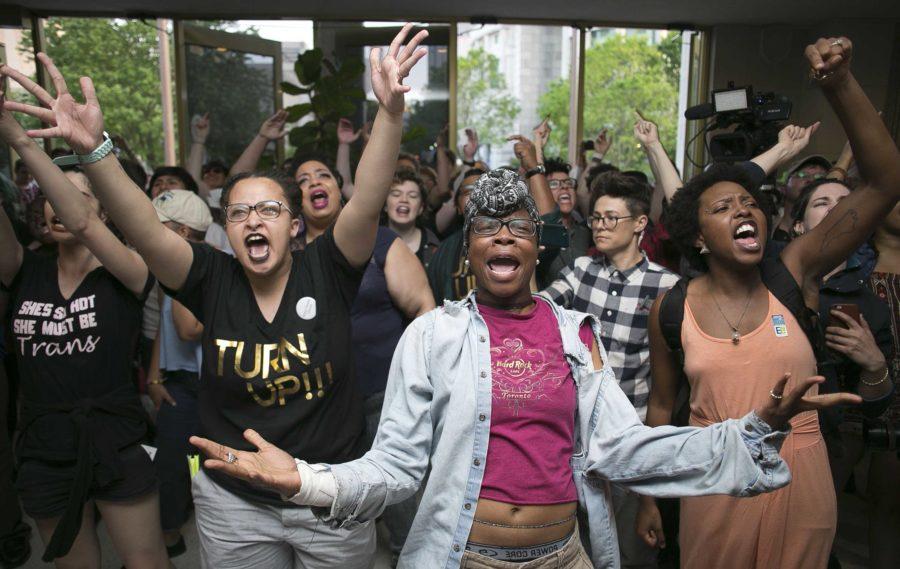 Krys Didtrey, left, and Gloria Merriweather, center, of Charlotte, N.C., lead chants in opposition to HB2 during a protest in the lobby of the State Legislative Building in Raleigh, N.C., on Monday, April 25, 2016. A large group of people starting chanting in the lobby moment after the House adjourned for the evening. (Robert Willett/Raleigh News & Observer/TNS)

The opposition to the North Carolina Bathroom Bill marks yet another rung on the ladder that we, as a country, are descending into an uncertain future.

The bill restricts bathroom usage to the gender issued on one’s birth certificate, as opposed to the one the person identifies with. Which, in layman’s terms, means that any man or woman can go into any bathroom simply by saying they feel more like that gender. My concern is this opens the door to those with bad intentions, which has already happened in some places.

It is not your grocery store’s responsibility to tell you what you should and should not accept. Businesses like Paypal and Target outright punishing the citizens of North Carolina or threatening to refuse service is hypocritical at best. Target has spoken out and publicly defied the law, in spite of over 1 million signing a signature to not do so. They do all of this, yet still have many stores in India, in which same sex marriage is illegal.

Paypal has chosen not to expand their business in the state, cancelling the creation of hundreds of jobs directly citing their discordance with the bill, yet openly offer their service in countries like Saudi Arabia. If enforcing biological gender in bathrooms is worthy of some type of preferential mistreatment, then why does criminalizing homosexuality and having an autocratic government not carry a refusal of service or any penalty whatsoever?

Oh where would the citizens of this great country be if not constantly guided by their openly biased grocery stores and social media outlets? So please, Target, tell me how I am supposed to live my average American life from your well-paid marketing team in a glass tower. When I receive my paycheck over Paypal, why should I not be reminded of how wrong my opinions are?

How about when I check my Facebook feed? When I need to search something up on Google? Every aspect of public life has political bias, and it always leans left. The thought that I might not want little girls or boys more open to exploitation is so audacious to these massive, global companies that I must be chastised at every turn.

When a company’s product is so widely and universally used, such as Google, and then they decide to publicly denounce a bill in North Carolina? Perhaps their long campaigns against oppression in the Middle East or Africa have missed me, but perhaps it is that they are picking the easiest targets. Average, everyday Americans who are worried about their communities, those are the true enemies to them.

What type of world do we live in where these companies publicly and fervently denounce the bill, but I hear no mention of stoned women in Saudi Arabia, or rape victims in Africa. Where is their justice?

These companies treat the everyday American as a lemming that cannot decide for himself what is wrong and what is right. It may be a novel idea to think otherwise, but I think these companies should stick to what made them rich in the first place. If I want opinions, I know where to get them, and it sure is not on my way to the dairy isle.