After jump-start late in game one, Masters, Kodros lift team to sweep of Duncanville 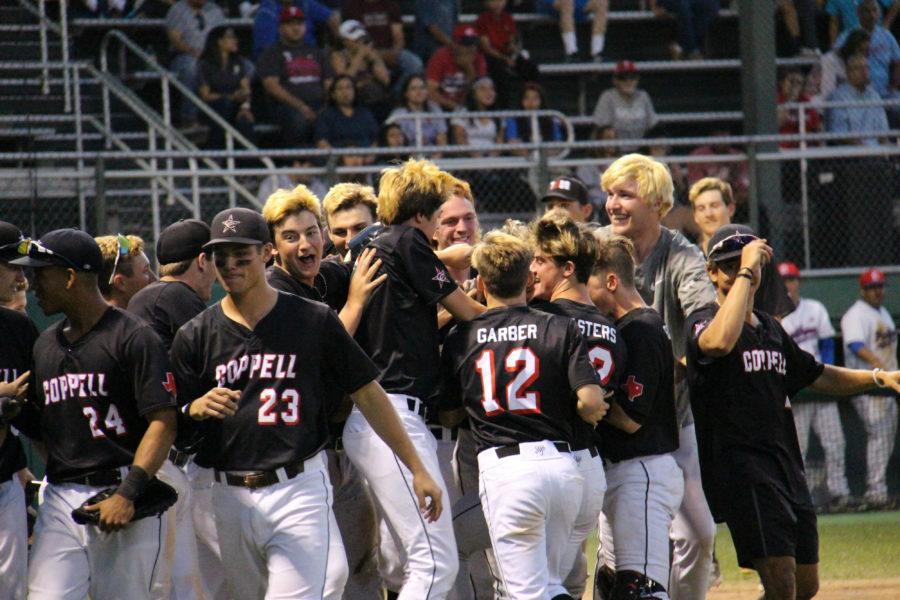 The Cowboys mob junior shortstop Jacob Nesbit after his two-run jimmy-jack broke the game wide open for Coppell. Nesbit’s homer added two much-needed runs in the top of the sixth as the Cowboys would go on to win 8-1 in Duncanville.

DUNCANVILLE– At times, teams loaded with talent need a wakeup call. On Friday night, the Cowboys got one. A four-run inning from Duncanville (7-19) in the bottom of the sixth was able to spark a seventh-inning rally for Coppell (28-1), as they snuck past the Panthers 8-4 in game one of the bi-district series. Then in game two, the Cowboys kept their foot on the gas pedal en route to a much cleaner 7-0 win, sweeping the series and moving to the area round.

In game one, the Cowboys held onto a steady 4-0 lead until the sixth inning, when senior pitcher Charles King, who had a stellar performance save the sixth frame, loaded the bases with no outs. Senior pitcher Chris Burdine struck out one but allowed two RBI singles, then an error on a possible inning-ending double play ball tied the score at four.

The bright spot in game one for the Cowboys came from their timely hitting. After being relatively shut down in the first five innings, junior shortstop Jacob Nesbit, in his first game back from a stress fracture in his vertebrae that kept him off the field for six weeks, launched a two-run homer to left field, giving Coppell their third and fourth run of the game

“It was definitely huge [for me]” Nesbit said. “I started off the game (zero) for two with two groundouts, and I was kind of down on myself. I started seeing the ball well on my third at-bat. It was definitely a huge confidence booster.”

After the rally from Duncanville, the Coppell bats remained hot, as they picked up four more runs on three hits in the top of the seventh inning to take a commanding lead for closer Ray Gaither. Nesbit added another RBI on a single in the inning.

“It was really good just to get at-bats, just to see the ball again,” Nesbit said. “It looked pretty big to me, so I had a pretty good game, but we kind of let that team hang around.”

Moving forward to game two, they could not let the Panthers stick around. They needed a dominant performance to regain their confidence moving forward.

In the second game at Coppell on Saturday, the Cowboys were able to continue their hot hand at the plate while cleaning up their defensive play and focus, shutting down Duncanville in a 7-0 victory.

Junior pitcher John Kodros threw a gem, striking out six and allowing two hits and no runs in four innings of work. Senior pitcher Chris Burdine rebounded from Friday night, throwing three innings of scoreless ball, allowing two hits and striking out five. Both pitchers were able to rely on their defense behind them to make the necessary plays to keep Duncanville off the scoreboard.

“The ballpark was a little bit dead, but we just played really sound defense and pitch well,” Clark said. “Hitting kind of comes and goes, but [moving on] if we pitch and play defense, then we’re always relaxed.”

On Saturday, the hitting was there, particularly with junior outfielder Cody Masters, who hit finished the day three for three with a leadoff double down the line, an RBI single and an RBI triple that was absolutely crushed to the wall in dead centerfield.

“It feels good,” Masters said. “I’m just going to keep working hard, put some good swings on it and see what happens.”

For the Cowboys, if they continue to play with the focus and defensive capabilities that they displayed on Saturday, they could have the opportunity to make the deep playoff run that is in the works with this team.

“We hope that they learn from game one [Friday] night,” Clark said. “Yesterday just tells them to stay beared down like it’s a 1-0 game, not a 4-0 game.”