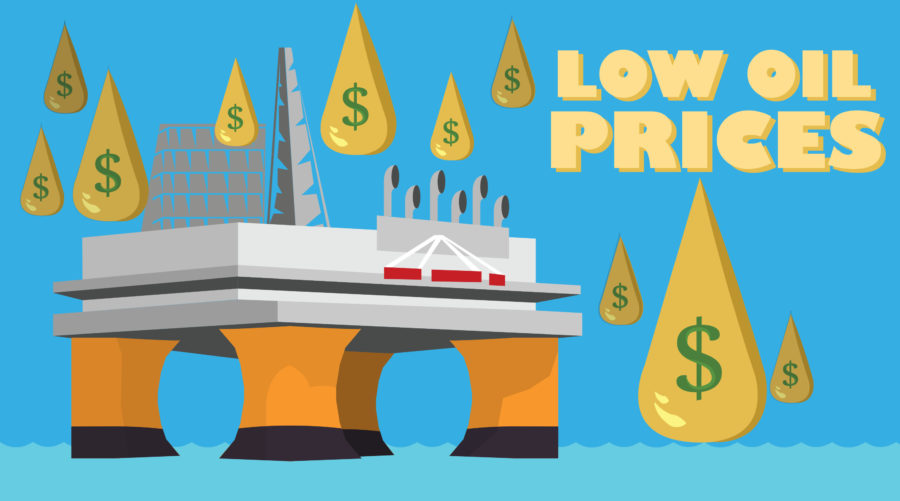 In recent times oil prices have dropped significantly, going from $105 per barrel in 2014 to $29 per barrel in February of 2016. For the average consumer this means more savings, however for the statewide economy this could lead to a recession.

Texas economy thrives on agriculture, aeronautics and mainly oil. Therefore, when oil prices remain low, the economy does too. When oil production remains moderate, more is put back into the economy.

“Low oil prices are causing oil companies to stop production in the United States and reduce jobs in the United States, and it is really tough on our economy; that is on the business side,” Coppell High School U.S. History teacher John Harris said. “On the consumer side, it sure is nice to have cheap gas especially when I go on vacation. It helps my monthly budget a little bit.”

In Coppell, people see the impact at the pumps, as with low oil prices comes low gas prices. This results in more driving and less money being spent at the pump.

“Low gas prices help me because I don’t get much miles per a gallon,” CHS senior Trevor Onstott, who drives a 1990 Ford F150, said. “I get about eight miles a gallon, so if it goes up to what they were, $3 a gallon to four, that is going to be really expensive for me, filling up so much. That is why it is better for me when prices are low.”

While consumer activity drives the economy, higher oil prices means consumers are paying more at the pump. Thus, more jobs are created and maintain in the oil and gas industry. According to What Is Fracking, the oil and natural gas industry supports 9.8 million jobs. With such a large industry, many people rely on the production of oil to keep a steady income.

“I think on balance, certainly in Texas, and perhaps in much of the rest of the country, extremely low oil prices in prolonged bases are not good,” former President of American Association of Petroleum Landmen Roger Soape, said. “And, they are not good because you look at the jobs that are being lost in the energy business – the oil and gas business – those jobs typically are much better jobs than the jobs that are being created in the current economy.”

“Manufacturing industries across the country are hurt by low oil prices, you don’t think about it, but all these manufactured homes and mobile home type of arrangements that were going on in the boom areas, and the so called ‘bandcamps’,” Soape said. “ A lot of those materials were built in areas that have nothing to do with the oil and gas business, Washington state and the Northwest has a lot of manufacturing going on up there that was booming because of the oil industry.”

The oil prices affect the economy more than people think. Many people who are not affiliated with the industry are being hurt.

“Almost all the oil companies cannot survive a $40 oil (the price per barrel of oil),-” petroleum engineer John Davis said. “Anytime industries cannot survive a certain price; companies go bankrupt, capital spending decreases and when that happens the amount of supply of oil, or whatever that commodity is has to decrease.”

Low prices may be good for some, but for many it can mean devastation.