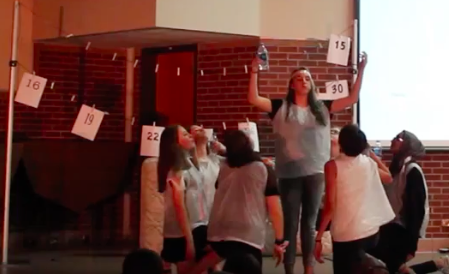 The Broadway Bound class performs 30 plays in 60 minutes at the CHS commons. Audience participated in the play.

The play, “Too Much Light Makes the Baby Go Blind” is a show of 30 plays in 60 mins. This show was performed by the Broadway Bound class and was held at the Coppell High School commons on Friday and Saturday.

When stepping into the commons to see the play, there was a giant timer from a iPad projected on the wall. Next to it were two rough strings hung with a bouquet of numbers between one and 30. There were chairs a little to the right of the string and, directly in front of the timer, there was the performance area.

When the chairs had filled, the lights dimmed and the whispers hushed as student director and CHS sophomore Abbie Hall came onto stage in a plaid shirt and leggings. With hands on hips and her right leg slightly outward, she began speaking, her loud voice filling the auditorium.

She introduced the play and gave insight on what the audience should anticipate, stating that audience involvement would happen. The main job of the audience was to shout out a number and then Hall would select one and the theater would perform. If all plays were completed in 60 minutes then it would be great, she said, but for that to happen the audience would need to participate.

And with that, the play began.

The timer started ticking and numbers were shouted before Hall chose six. This was “Three Simple People Saying Three Simple Haikus.” And with it, three people with black tops and jeans took the stage, standing in a straight line and began slowly enunciating their three haikus which filled the audience with laughter as the actors spoke.

After that 14, Macbeth, was chosen in which the actors performed the “entire play” in two mins. And the numbers moved, with 20 next, then seven, and so on. The audience kept shouting numbers, and then Hall grabbed the number from the drawstring, rolled it up, and threw it (the number) toward the crowd as the actors took the stage and began performing.

The play continued, with laughs and angry grunts when someone’s number was not chosen. Then number 27 was chosen. In the Menu, number 27 was blank and the audience was curious, shouting the number out since the beginning until the 20th play, when it actually began.

The play continued with hilarious acts that filled the audience with laughter, such as number 24, in which Hall recited the poetic form of Sonnet 18 – Shall I compare thee to a summer’s day and Becker in contemporary English that used today.

Each play stirred emotion, and the actors captivated the audience. The play ended with number 29 which was called “Honestly”. In this act, the audience chose a member and he or she had to honestly answer questions, for 30 seconds, that were drawn from a tub, which the audience filled with scraps of paper containing questions. CHS sophomore Mark Beshai was chosen by the audience and Hall drew the questions.

After this, the play came to an end with 10 minutes ringing on the stopwatch; the play had finished in 50 minutes and the lights flicked off.

*Both Friday and Saturday had different agendas, since plays were student directed, but below is the Menu for the Saturday show.

Warm Ups
The Art of Acting
Uta
Date Night
Deja Vu
Three Simple People Simply Saying Three Simple Haik
The Sound of Fury
ICYMI: Big Fish
German 101
Brick VS. Koolaid
Three Year Old Interview
Red
ICYMI: Big Love
Macbeth
Monologue
In the Silences
Ten Years and Six Months
Tool
Of miscellaneous but important part of what I did not say to you when I should have and now you are gone and I do not know if I will find you again to tell you all I want to
Traps
Having missed its cue, the orange entered hurriedly. But once on stage it found that it had forgotten its lines entirely and remained paralyzed before the audience for what seemed like eternity
Three Lines
Frozen
A Love Sonnet to You
ICYMI: Barefoot in the Park
Change It
_ _ _ _ _ _ _ _ _ _ _ _ _
Amelia Earhart
Honestly
The Five Basic Conflicts and Their Relationship to This Play