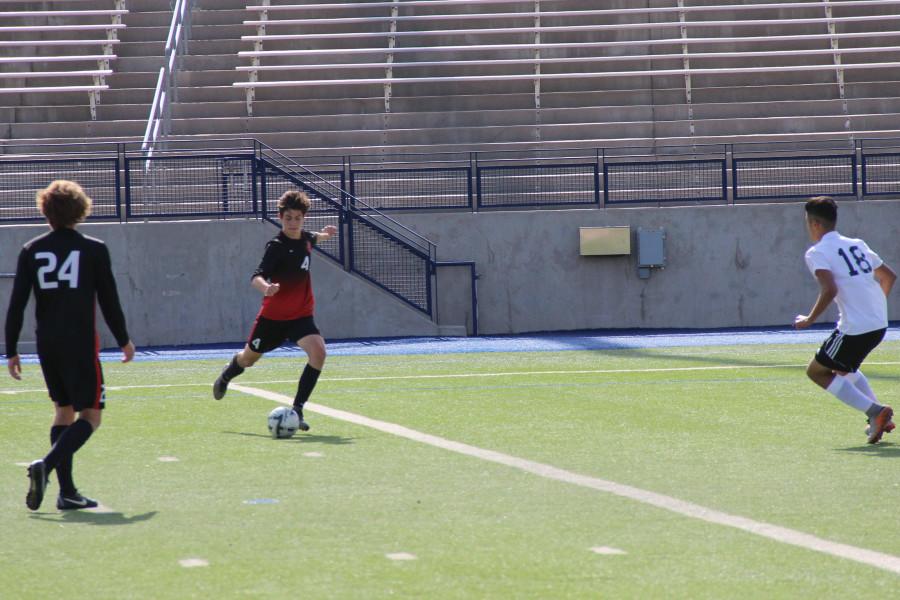 Sophomore forward Wyatt Priest strikes the ball in the second half of the Cowboys' 3-0 victory over El Paso Socorro on Friday, April 8. Priest scored his third and fourth goal of the playoffs to boost the Cowboys over the Bulldogs.

In a game that was tied until midway through the second half, the Cowboys soccer team (21-0-2) stayed true to their game thus far in the playoffs: play incredible defense and score with sophomore forward Wyatt Priest, as they defeat El Paso Socorro (14-10-0) 3-0 to move on to the 6A Region 1 final.

e attack but fail to produce a good opportunity to score, Priest generated a beautiful chance in the 52nd minute, getting behind the Socorro defense with the ball. With no other option left, the Bulldogs defender tackled the sophomore in the box, giving him a penalty kick.

As calmly as if he was just in practice, Priest delivered the shot into the back of the net to break the tie and give Coppell the 1-0 lead early on in the half.

“Creating that [penalty kick], the first touch to get in behind, the acceleration, then to have the composure to finish it off is huge,” Coppell coach Chad Rakestraw said. “He’s a good player. He’s dynamic in the attack. He makes people miss, just like he did [to produce] that penalty kick. As a sophomore, to just have the wherewithal, the composure, the confidence, it’s great for him.”

Just as in their previous three games after their first goal, Coppell settled into the game, playing aggressively while controlling time of possession. After Socorro, scrambling for a goal, fouled the Cowboys 30 yards from the goal in the 67th, Coppell had the perfect opportunity to score . Junior midfielder Alex Haas’s free kick was saved by the keeper, but Priest finished it off the bounce for his second goal of the game and the dagger.

“The goals that I’ve scored really haven’t been just my goals,” Priest said. “It’s been the team. The team has just really helped me out scoring, and I’m just glad I could help contribute to what the team did.”

Socorro, traditionally a defensive-minded team, could not produce any solid chances to score. Throughout the entire game, the Cowboys played extraordinary defense, not allowing Socorro to get a single clean shot off.

“The defense did a really good job of limiting opportunities,” Rakestraw said. “To be honest, I don’t think they got a shot on goal, which is phenomenal. This is a team that scored seven goals in their last three games. To be able to get a shutout is huge.”

Nearing the end of the game, a disheartened Socorro team picked up several yellow cards and one red card, playing frustrated and physical as time wound down. After one foul from 35 yards out, senior midfielder Stejpan Kilic put an incredible shot off the crossbar and in to give the Cowboys the 3-0

“I’m asking Stejpan to put it into the corner to kill time, and he just decides to put it on frame,” Rakestraw said laughingly. “I mean, can you get mad at someone for scoring? I don’t think so.”

The physicality of the game throughout, markedly in the late going after Coppell took the lead, proved to finish in favor of the Cowboys, as they were able to keep their poise when the Socorro players drew yellow cards.

“It prepares us because we know every game from here on out is going to be a fight,” Priest said. “We just know that we’re going to come out hard and ready every time.”

In their next matchup, the Cowboys kick off against Plano East at 3 p.m. on Saturday. Just after the Cowboys’ win, the Panthers defeated El Dorado in a miraculous comeback, scoring two goals in the final eight minutes to go on to win in penalty kicks.

“It’s obviously a quick turnaround,” Rakestraw said. “But everyone else is in the same boat. No excuses when it comes to that.”

In every facet of the game, Coppell has dominated in the playoffs. Even with the lack of recovery time, if the Cowboys continue to play defense and remain in their attacking half as they did on Friday, they won’t have to worry about any excuses.