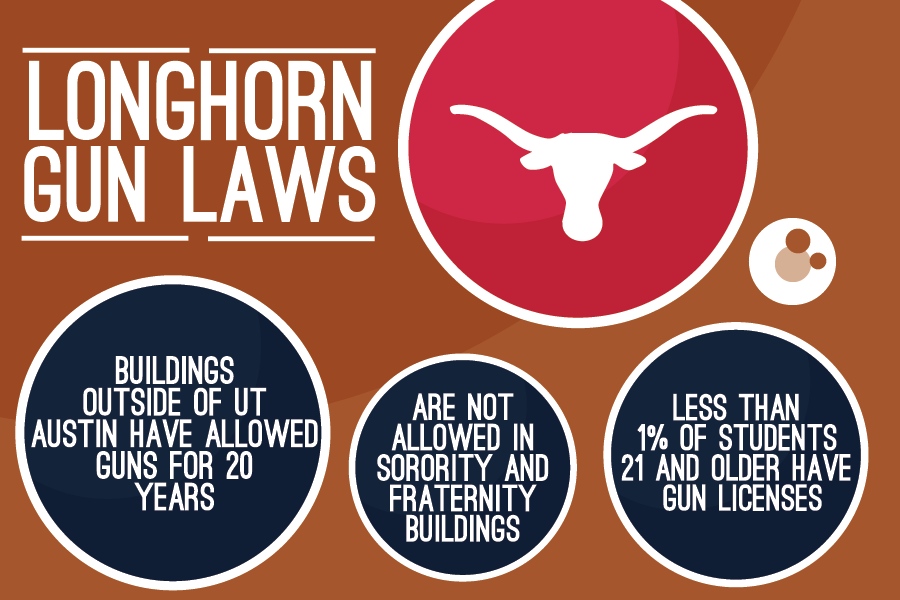 Guns have been a hot button topic at college campuses due to the shootings in Oregon and others in Texas still in recent memory. There are many proposals to solve this, but many claim that the gun-free zones do not work, and merely prevent any armed retaliation by law abiding citizens.

On Jun. 1, 2015, Gov. Greg Abbott signed the campus carry law into effect. This allowed students with concealed carry licenses to bring their sidearms into public campus buildings. Different campuses can make small changes to the law as a whole, but these changes cannot generally prohibit the carry of concealed firearms on public college property. Other regulations about the licenses remain the same.

The argument that this might make campuses more dangerous is, categorically, false. A concealed carry permit requires a person or, in this case, a student to be 21 years or older. That rules out a vast majority of the campus already. On top of that, being convicted of a felony or having a dependency on, or being under the influence of, one or more drugs will not allow that person to legally obtain a concealed handgun, thus ruling out more dangerous individuals.

In Texas, as in most other states that allow concealed carry, there is a required training course that must be completed. The course teaches the basics of how to use a handgun and assures that the person can safely handle the firearm outside of the range.

If someone wants to bring a firearm to a college campus in order or with intent to harm, they most likely do not care about any laws or regulations of a gun-free zone. In the vast majority of instances that person will not be alive several hours later to reflect on their judgement anyhow. The only difference is, that students who are law abiding could be able to defend themselves in the event of a threat.

It is not the government’s duty to protect the citizenry from themselves. Having a concealed handgun is about protecting yourself, it is not a tool for protecting the entire campus or the public. That is the job of a police officer. Having access to the means to effectively protect yourself against deadly force is a right that people should, and do, have.

A college campus is no different than an office space, movie theater, or a park when it comes to people and potential dangers. It should be no different in allowing students with a Concealed Handgun License (CHL) to have their firearm on them.

Often it is not a matter of making sure that nobody with bad intentions gets hold of a gun, because to make sure of that would be to completely deny the second amendment. Even then you cannot guarantee that no one will ever seek to hurt someone with a gun. What you can do, however, is make sure that good people are armed as well and can defend themselves against those with bad intentions if push comes to shove.
Although some people might find guns inherently frightening or dangerous, that does not and should not prevent others from having the potential to defend themselves with a firearm. Police cannot ensure an absolute absence of potentially violent crime on college campuses, and since they cannot there are going to be crimes where a student is in danger, and this legislation can save lives if those students can defend themselves.