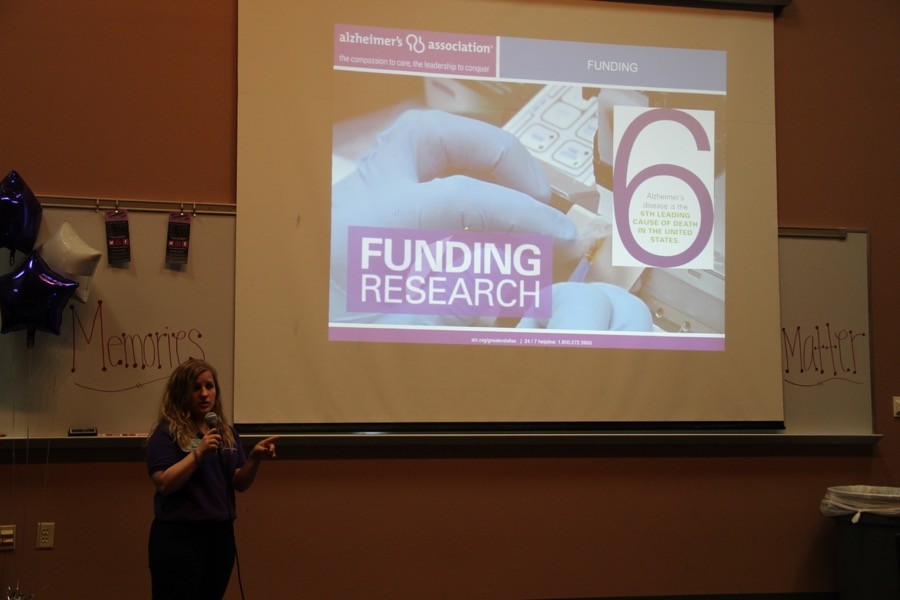 Representative of the Alzheimer's Association Katherine Campbell introduces herself for the Alzheimer’s Awareness event on Monday at the lecture hall. Alzheimer’s is one of the top 10 leading causes of death and is the only one without a cure. Photo by Jennifer Su.

Memories matter. The two word phrase that means so much to so many people. On Feb. 8, an Alzheimer’s awareness event took place, bringing awareness to the Coppell community.

The event in the Coppell High School lecture hall and was organized by CHS sophomores Jamie Jun, Sara Koh, Priya Mekala and junior Sai Javangula. This event was organized to inform the community of Alzheimer’s disease and its lasting effects.

Alzheimer’s disease is a fatal progressive brain disease and it affects families from all over the world. Although there are some treatments available to help the symptoms of Alzheimer’s disease like memory loss, there is no cure for it.

Jun, Koh, Mekala and Javangula have been volunteering at the Silver Ridge Memory Care Center in Colleyville for the past seven months.

“People know the word ‘Alzheimer’s’ but they don’t fully understand what they go through and the life that has been taken away from them,” Jun said. “To inform the community about this disease, we decided that holding an event would be the best way to reach out to not only the students, but teachers and administrators as well.”

Jun, Koh, Mekala and Javangula have spent seven months preparing for this Alzheimer’s event and their hard work has finally paid off: the seats in the lecture hall were all filled up.

Ever since they started volunteering and planning for this event, there is one phrase they live by: “Those with Alzheimer’s may not remember us but it is our duty to remember them,” Koh said.

Many students came in support of the event and it touched the hearts of many.

“My mom used to work at an Alzheimer’s home and I got interested in it because of her,” CHS sophomore Simin Bhayani said. “It’s interesting how you want to help people who have Alzheimer’s and raise awareness of it and it’s pretty cool. I think more people should know about it and I want to help.”

Jun, Koh and Mekala started off the event by introducing themselves and talked about what Alzheimer’s meant to them.

“As high schoolers, it’s really easy to overlook something like Alzheimer’s because it seems so distant and obscure to us but in reality Alzheimer’s affects so many of us worldwide and it affects not only those with Alzheimer’s but the caregivers as well,” Koh said.

Afterwards, they introduced Misty Martin, a nurse and facility manager of the Silver Ridge memory care center in Colleyville. Martin spoke of her past experiences involving Alzheimer’s and how it has shaped her as a person and influenced her in becoming a nurse.

“Our elderly should be loved and well taken care of,” Martin said. “Without them there would be none us.”

“Each one of these individuals, they have a story to tell and they’re not able to tell it because of this disease so through this we have learned one thing: that memories matter and though they are not able to say anything about it we must help them,” Mekala said.
Go to http://www.alz.org/ to find out more ways to help.