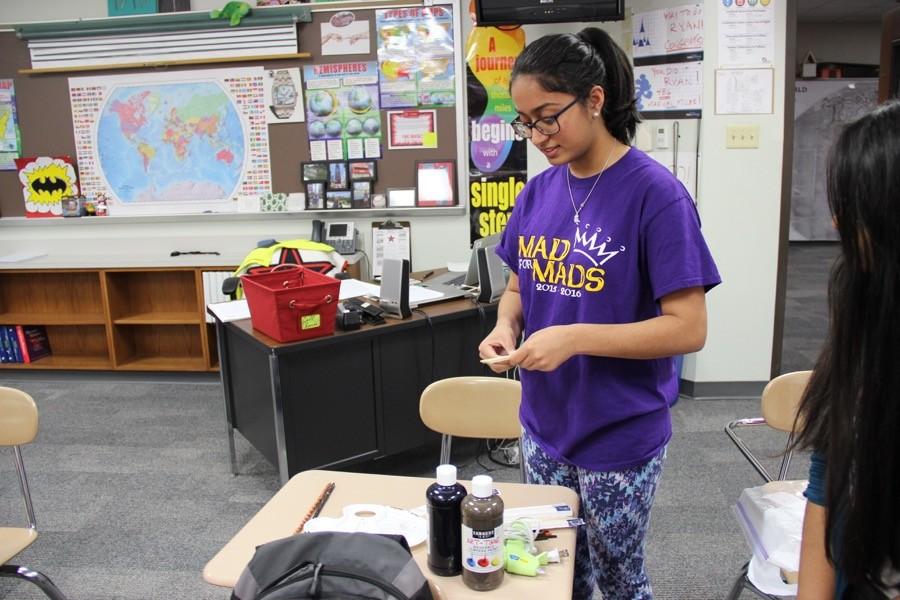 Coppell High School junior Rhea Tibrewal explains how to create a wand on Thursday in room B203. Tibrewal is the president and founder of the recently created CHS Harry Potter Club.

There is one room at Coppell High School that is just like Hogwarts. The members can be found making wands, discussing their favorite Snape scenes or trying to organize a quidditch team.

If you have not already guessed, the new club is exclusively devoted to all things Harry Potter.

The president of the club, CHS junior Rhea Tibrewal, has been a Harry Potter fan since she was a young child.

“I never really lost touch with Harry Potter and I knew that it was a famous series,” Tibrewal said. “I was hoping that in a school as big as ours that at least some one had read it.”

It turns out some had read the book; the club has about 11 members and counting.

The club started like any other club does. Tibrewal had a particular love for the book and after asking U.S. history teacher Diane DeWaal, she was referred to AP human geography teacher Paul Simpson at CHS. Simpson was the right guy for the job; he had dressed up as Harry Potter for fantasy day at the school.

Simpson shares a passion for Harry Potter and believes that the club serves a dual purpose for many of the students.

“[It’s] a way for them to escape the rigors of school while still having a somewhat academic focus because it is a book,” Simpson said. “It’s kind of their brief escape.”

Simpson also felt that the club provided an avenue for a student to express themselves.

“You really get an idea of a student’s personality: just last week we talked about our favorite scene from either book or movie with Snape, since Alan Rickman just passed away,” Simpson said. “And you can see through each student’s choice kind of how their personality is and what really peaks their interest.”

The Harry Potter series is quite a relatable one, which is what makes the club so attractive to some.

“Whether it’s the different travails of being a teenager to the issues of friendships as well as relationships, [it shows] how to be a good person and overcome evils from within and from outside as well.” Simpson said.

The members of the club find this to be true, and that the club serves as a safe haven of sorts.

“It’s nice to have a break and a social club that’s not a community service because there’s a lot of pressure to do well in school all the time,” CHS junior Colleen Jones said.

The club meets on Thursday twice a month in Simpson’s classroom (B203) in the morning to discuss Harry Potter and spend their time as though they were at Hogwarts.