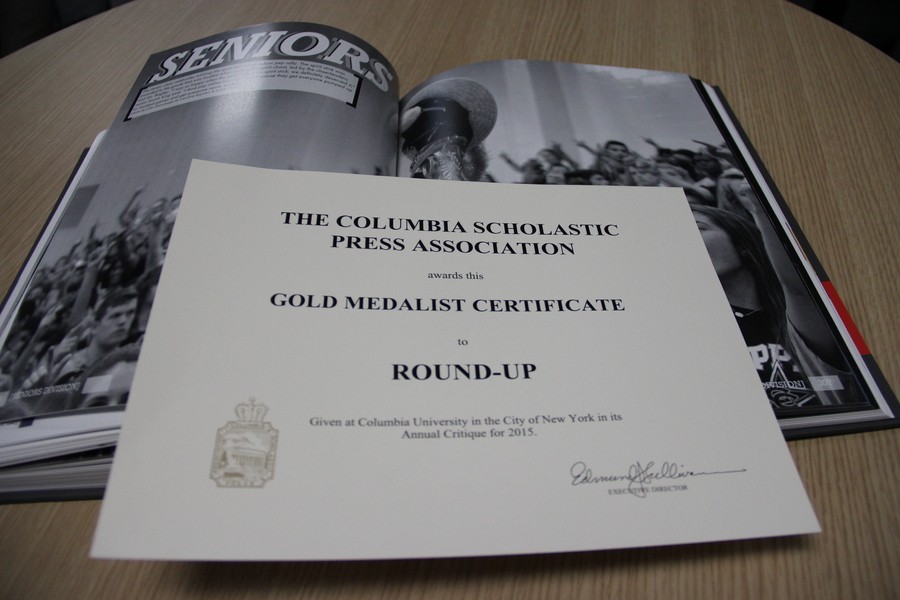 The Round-Up, Coppell High School’s yearbook received the Gold Crown from the Columbia Scholastic Press for its 2014-2015 edition

Round-Up adviser Sallyanne Harris noticed the vast amount of hard work that Coppell students put into their tasks from the first year she began teaching at CHS.

She has been teaching yearbook for 14 years, and the four years she has been at Coppell she has noticed the growth of the yearbook staff.

“I inherited a wonderful staff to start with and we keep trying to raising the bar higher each year,” Harris said.

With a staff and director as talented as they are, it is no surprise they got the highest rating. The contest is based on a point system with over 20 categories.

Although the yearbook staff now has a boast-worthy award, its effort does not stop there. This award will only push the students more and is a stepping stool to greater accomplishments.

“I think it [the award] is going to encourage them to continue that level of excellence and try to continue to be the best that they can be,” Harris said.

“Through this award we get to see the outcomes on why we got points off and what we got points off for; so we use that to mold the yearbook for this year, and that’s why we keep getting better each year,” Chung said.

A devout Round-Up reader, junior Christopher Xavier knew while reading the 2015 yearbook that it would achieve some sort on a high reward.

“I really enjoyed the design and the mood of the yearbook; especially the cover and all the types of people it covered. I’m not surprised it received the greatest rating”

This year was awarded to the past yearbook, but Harris sees even greater potential in the 2016 yearbook.

“This year’s yearbook is definitely a step up from other years’, and I think the cover is going to blow everybody’s mind,” Harris said.

The theme for this year’s yearbook is Look Again.

“We are trying to tie in our stories about things that people wouldn’t necessarily know and getting our stories to have that quality of ‘oh i never knew that,’” Harris said.

With such a great staffers and a passionate adviser, there are high expectations for this year’s yearbook from the readers and the staffers themselves.

According to Harris, this year’s edition will receive its rating in November 2017.