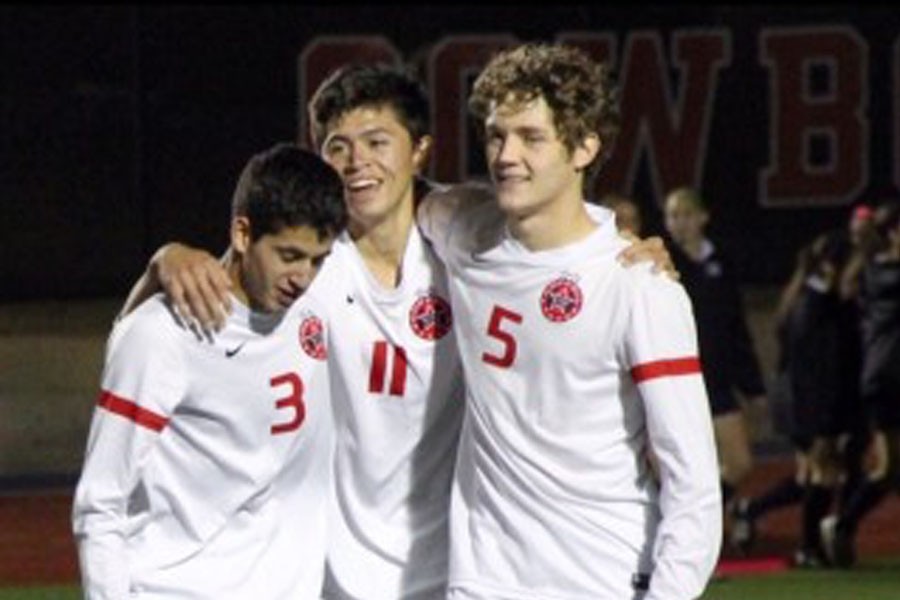 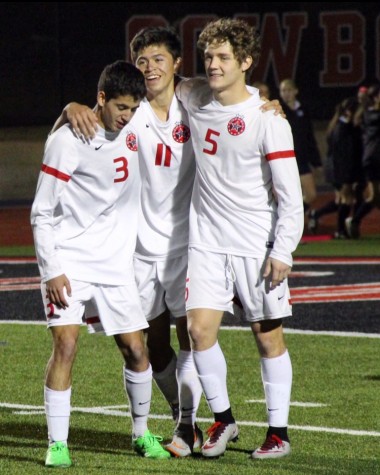 Amanda Hair Coppell High School forwards Rodrigo Zuniga (left), Nick Taylor (middle), and Tanner Traw (right) all share a hug after Taylor scored the sixth and final goal of Friday night’s game against Southlake Carroll. After keeping the lead over Southlake Carroll for the entirety of the game, the Cowboys defeated the Dragons with a score of 6­0 at Buddy Echols Field.

Coppell senior forward Tanner Traw, for the second time on Friday night, ran back towards his celebrating teammates, arms outstretched, a smile on his face and the ball in the back of the net.

For the fourth time that game (and the second time for Traw), the Cowboys offense had capitalized on one of their many scoring chances they created.

Throughout much of the match, Coppell was able to maintain possession, working the ball around with crisp passes to open spaces in the field. In doing so, the Cowboys created a multitude of scoring chances in the final third, capitalizing on six of them.

“Tonight, it was a good example of [staying on the attack],” Coppell coach Chad Rakestraw said. “We need consistency. On Tuesday (a 2-1 victory over L.D. Bell), we didn’t have that. But it was a good response. All we can ask for is progress each game.” 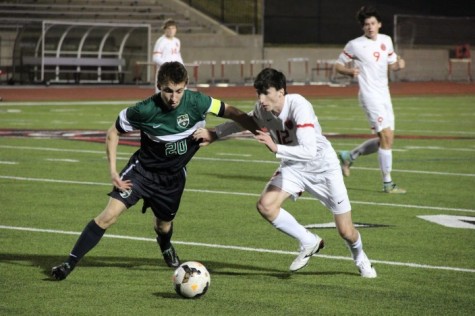 Amanda Hair Coppell High School senior and fullback Brandon Bohn attempts to steal the ball from a Carroll High School forward during the first half of Friday night’s game at Buddy Echols Field. The Coppell Cowboys claimed a victory over the Southlake Carroll Dragons with a final score of 6­-0.

From the start, Coppell was pressing back on the Carroll defense, nearly scoring in the 15th minute after a goal was taken away from an offside call. Only three minutes later, the Cowboys were back in the final third creating chances to score. This time, senior forward Marcelo Gaitan finished off a pass from raw, giving Coppell a 1-0 lead.

“We just needed to get on them early,” Rakestraw said. “Any time that we can score a goal early, our team just continues to gain confidence, and it puts a doubt in the other team. So that was key for us to be able to get one halfway through that first half and just loosen up a little bit.”

After junior midfielder Alex Haas scored off a beautiful free kick from 35 yards out, the Cowboys took a 2-0 lead and plenty of confidence into the locker room at halftime.

The Cowboys kept the Dragons defense on their heels right out of the gate in the second half, getting two quick goals from Traw in the first seven minutes of the half to take a commanding 4-0 lead with 33 minutes left to play.

“We attacked pretty well,” Traw said. “Obviously we had six goals. There was a lot of movement up top and finishing. That’s pretty much it. We just worked as a team.”

After the scores from Traw, Coppell was in cruise control, netting two more goals from junior forward Nicolas Taylor as the exclamation point on what was an impressive rout of the rival Dragons.