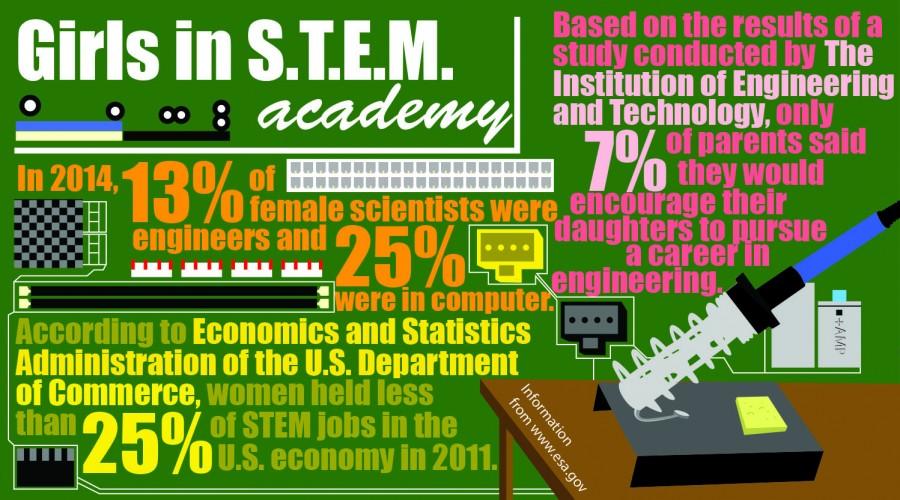 As the world continues to develop technologically, the importance of careers in science, technology, engineering and math (STEM) has dramatically increased. However, the number of women who are actually pursuing a career in these fields has remained stagnant.

According to the Economics and Statistics Administration of the U.S. Department of Commerce, women held less than 25 percent of STEM jobs in the United States economy in 2011.

In 2014, 13 percent of female scientists were engineers and 25 percent were in computer and mathematical sciences, as researched by the NSF Science & Engineering Indicators.

Despite the continuous growth in technology and innovation, there is little to no growth in the number of women who hold jobs in the STEM industry.

The cause for this gender gap may stem from a variety of sources, especially social influences.

Societal norms and stereotypes deter young girls from working towards careers in science and math, as these subject areas are generally considered “male” fields.

In fact, a recent study conducted in 2013 by the Proceedings of the National Academy of Science suggested that men are twice as likely than women to be hired for occupations in math, if both candidates were equally qualified.

It has become a common misconception throughout the world that women are only interested in humanities or arts, whereas men are interested in math and science – which are, in fact, strongly dominated by males.

“In class, we had to build a machine that required a lot of power tools and using hand tools. My group consisted of me and two other guys,” CHS sophomore and STEM student Maria Guedilla said. “The guys did a lot of the building and I would be there for ‘moral support’, and I felt very useless in that portion of the project.”

Enforcing gender stereotypes, deliberately or not, inhibit young girls from cultivating a passion in these subject areas. Many feel as though they should not be interested in those areas, in fear of being considered an outcast or “nerdy.”

“Girls are discouraged from going into science because they are intimidated by the possible threat of discrimination from their male counterparts,” Coppell High School sophomore Mackenzie Dennis said.

However, these gender biases are not only strengthened by their classmates, but also by their parents.

Recent studies have suggested that parents may actually be the ones encouraging gender stereotypes. Based on the results of a study conducted by The Institution of Engineering and Technology, only seven percent of parents said they would encourage their daughters to pursue a career in engineering.

In order to break these stereotypes, girls should be encouraged at an early age, both in school and at home, to pursue whatever career they desire. By encouraging and promoting the ability to choose the career they like despite gender, more girls will feel accepted and valued.

More opportunities should be available for girls at school, as well. There are only a few girls enrolled in the STEM endorsement at CHS.

“We’re still sitting about 10 to 15 percent, which is about the national average,” Yakubovsky said.

STEM may not be of interest for every young women, but there are many who are passionate about these subjects and should be encouraged to pursue a career in them.
“There aren’t a lot of girls or women in STEM and that’s pretty sad because females can contribute and make the world a better place,” Guedilla said. “They just need a chance to go and grab it.”