Open Carry Is Not Necessary 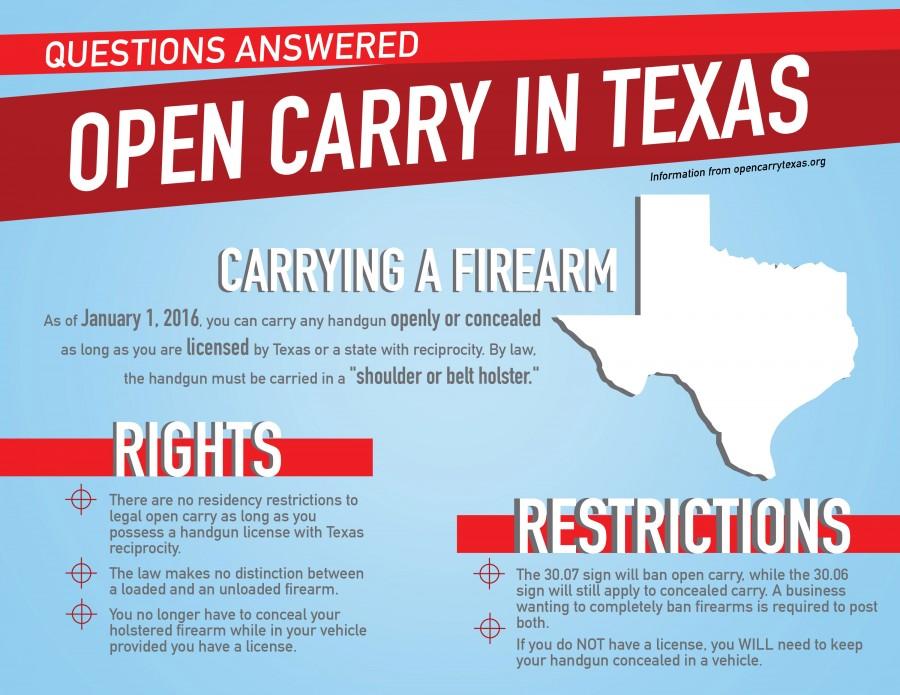 Open carry became legal in Texas on January 1, 2016. Here are the basics of the law.

In a potentially revolutionary era for American politics, citizens have been constantly  battling between which politician is right on a multitude of topics facing our country right now, and at the forefront of these issues has been gun control.

In the wake of an alarming number of mass shootings at places that you would never expect to have to worry about a potential shooting, Americans are more divided than ever on who should have a gun and how they should be able to acquire one, and for good reason.

Gun ownership in the United States has been on the decline in recent years, but as the popular opinion in America shifts towards a society with stricter gun control, those who strongly support the Second Amendment are starting to speak out, especially in the South.

While Democrats have been divided over whose gun regulations are the toughest, Republicans are debating over just the opposite: who has the most lenient gun regulations. With the two major parties so evenly divided over the issue, it is no wonder that this is a problem that has not found a viable solution yet.

As someone who is very concerned that you essentially cannot go anywhere without the possibility of being shot (and this was true before open carry), I am puzzled over the need for open carry. While I am in favor of stricter gun control measures, I do understand that in the South, guns are a part of the lifestyle. Hunting is huge in the South, and I personally have no problem with guns used for hunting.

What I do have a problem with is the fact that there is a legal loophole that allows anyone, no matter what their criminal background is, to go to a gunshow and buy a gun. I do not know when or where this “anyone should be able to buy a gun” mentality came from, but prominent Republican politicians, as recently as George W. Bush, have called for background checks. Coming from a conservative state, I get to see both sides to the gun control argument, and it really leaves me more confused than anything.

Background checks to me are just common sense. Open carry vs. concealed is much more a slippery slope. A common argument from conservatives is that banning open carry punishes responsible law abiding gun owners. This is simply not true. Just because you can not walk around the grocery store with your gun out for everyone to see, does not mean the government is coming to take your guns.

Perhaps if concealed carry was not legal, I would see some of the validity in the “taking our guns away” claim. But it already was legal. You can still have your guns. If you are truly a responsible law abiding gun owner, none of the gun control measures put into place should have any impact on you other than a minor inconvenience. But, for whatever reason, having a gun is not enough.

This is where I get confused. I would think someone who truly has a gun with them for protection would not want people to know that they have a gun. I simply do not see a point in open carry aside from intimidation, the “don’t mess with me I have a gun” mentality that I think many open carry advocates have.

Another issue that can be brought into this is race. While I know Republicans especially do not like race being brought into things, I have been to some parts of Texas where I am confident that if a black man was walking around exercising his open carry rights, people would not be too respectful towards him, and that is putting it nicely. This goes for many other parts of the country as well, as unfortunately right now there are certain politicians appealing to people’s fears, and blaming immigrants and minorities for America’s problems.

In this toxic environment, can we trust that everyone will be treated equally under this law? Will law enforcement and citizens really be willing to accept this double standard, that everyone who meets the legal requirements can practice open carry? Time will tell on that issue.

My final problem with open carry is that being in an environment where all types of people come together (like a grocery store), and then mixing guns is never a good idea. Some people might freak out as a result of seeing a gun openly in public, and that might make those with guns upset. Conflict is always possible when you are around a group of people whether guns are involved or not. However, adding guns into this mix can not be beneficial.

While many open carry advocates like to argue that someone with a gun could prevent a mass shooting from taking place, there has been little evidence to suggest that this is true. I am willing to at least understand this argument if more evidence were to be presented.

People act on impulses, and I feel that many people who feel the need to show that they have a gun rather than keep it concealed, are the types who are more likely to act on an impulse and end up hurting someone, or worse. That does not mean everyone who practices open carry thinks like that – there are many perfectly law abiding citizens who support open carry because it is a part of the lifestyle they have always lived. But one crazy person is enough to cause huge problems.

Besides, the same politicians who say that it is unfair to lump a group of people together based on a small number of crazy people, have no problem doing that when it comes to certain religions and ethnicities.

There most certainly has not been a perfect idea to solve the gun violence epidemic we seem to have in this country, and gun control might not be the perfect solution. But I certainly do not see how allowing anyone (as I said earlier in the article, literally anyone can buy one at a gunshow), to just walk around with a gun visible to everyone would help the issue. The United State has a “gun culture,” especially in the South, that people just can not seem to let go.

Standing for your rights is fair, and as I mentioned earlier in the article, there is nothing wrong with guns used for hunting and other lifestyles. But there are people who will not budge at all on the issue, even when there is clearly a gun violence problem. I think people on both sides need to be willing to compromise, at least to an extent. I feel that in the heat of these debates, politicians seem to forget that there are innocent people dying because of people who should not have guns, are getting guns, and that solving that issue is a far bigger concern than being able to walk around showcasing your gun.