Not really, but that title was too pun-y to pass up.

The cast of Percy Jackson and the Lightning Thief did, however, come to Stonebriar Mall in Frisco on the Jan 17, as part of a Hot Topic-sponsored tour of the country. To see the cast at 3:00, fans had to first purchase tour $25 t-shirts to get a wristband that would let them in, and fans were supposed to be Hot Topic club members.

As a Percy Jackson fan who plans to brave obnoxious crowds of middle school students to see the midnight premiere of the movie (which is on February 12th, by the way), I simply had to be there.

I went with two friends. We were going to leave at one–which became 1:30–and then got lost twice–going to the wrong mall on accident, and then going back to the wrong mall and thinking it was a different mall. When we finally got there, we were perilously close to running out of time, and were the last ones let in the store to buy t-shirts.

And then all the excitement ended and we sat in line from an hour and half.

And then all the excitement began again when we could actually see the entrance from our spot in line, and realized how close to the cast we were. Like the true creeper I am, I managed to take no less than a dozen pictures, despite security and rules about not taking close-ups.

I got to meet, in order, Logan Lerman, Brandon T. Jackson, Alexandra Daddario, and Jake Abel. It was amazing. They were all super nice as every ounce of sanity fled my head (although I’m sure your standard cup of fro-yo at Cherry On Top has more ounces in it than I had ounces of sanity) and I babbled on about how great it was too meet them.

I don’t think I’ve ever smiled so much in my life.

And then, after security ushered me out for taking too long and just standing there with admiration and I was standing with my friends, we held out our hands. These right hands had touched the cast of Percy Jackson. These right hands were immortalized in greatness. My right hand was smeared with blood.

I realized something amazing had happened: when the Hot Topic employee handed me a poster for the cast to sign, as only posters and books were allowed to be signed, I had gotten a massive poster-paper cut, which is only inferior to the dreaded cardboard-paper cut.

Don’t get me wrong; I’m not some masochist who loves to bleed, nor am I a Medieval Doctor who believes in bloodletting to remove evil spirits (they’re still there!), but looking at the blood smeared on my hand, I realized that I must have bled on the cast of Percy Jackson.

So Logan Lerman, wherever you are with your non-metrosexual Zac Efron beauty, I’m sorry I bled on you. I promise I don’t have AIDS and though I’m a mere mortal compared to your god-like status in my heart, my blood isn’t dirty.  At least, I don’t think it is. However, now we’re blood-bonded, so I’m sorry, but I’m not sorry for that part. Like a bad Taylor Swift song, you belong with me. 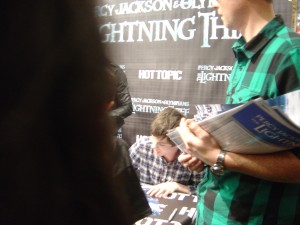 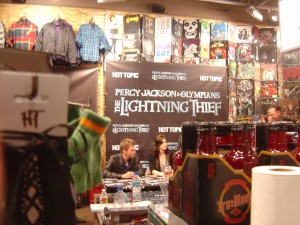 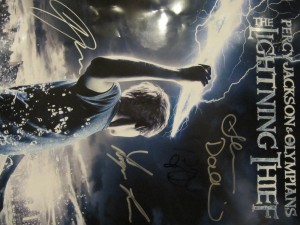 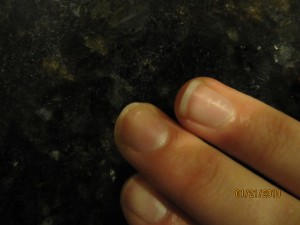