Coppell High School students are sure to find themselves looking for ways to be entertained this December.

Fortunately, a good variety of movies are hitting the big screen in the coming weeks, ranging from a dramatic biography to a cartoon Disney comedy.  Here are the films to keep an eye out for this holiday season:

This dramatic film stars actors Saoirse Ronan (Atonement), Mark Wahlberg, Rachel Weisz, Stanley Tucci and Susan Sarandon.  Based on the popular novel by Jodi Picoult, this movie is a one-of-a-kind mystery, as it is told from a murder victim’s perspective.

With the voices of Keith David and Oprah Winfrey, this film is bringing back the Disney princess tradition using animation similar to the classic cartoon movies.  Taking a beloved fairytale and throwing in a unique twist, this film serves as a cute comedy for kids as well as adults.

This film, starring Morgan Freeman and Matt Damon, tells the true story of South African President Nelson Mandela and his attempt to end apartheid by enlisting the national team on an assignment to win the 1995 Rugby World Cup.  It is expected to be a powerful and dramatic biography.

Starring Hugh Grant and Sarah Jessica Parker, this film has a unique plot following the lives of an estranged couple: Paul (Grant) and Meryl (Parker) Morgan.  As they witness a murder and find themselves stuck in Wyoming under the Witness Protection Program, this comedy will be geared toward adults and teens.

Starring Sam Worthington (Terminator Salvation), this movie centers around Jake (Worthington), a 22nd century former Marine who is taken to an alien planet where people and cultures collide.  This sci-fi film is digitally animated and filled with action.

Alvin and the Chipmunks: The Squeakuel (Dec. 23)

Starring Jason Lee and the voices of Justin Long, Christina Applegate, Jesse McCartney and Amy Poehler, this sequel to the popular Alvin and the Chipmunks, released December of 2007, continues the story of Alvin, Simon and Theodore as they attempt to fit in while growing up.

Starring Robert Downey Jr., Jude Law and Rachel McAdams, this modern version of a classic mystery story is widely-anticipated by CHS students.  Filled with action, drama and humor, this film is sure to be a hit for guys and girls alike.

Starring Meryl Streep, Alec Baldwin, John Krasinski and Steve Martin, this romantic comedy is about an older woman and the two men she is torn between.  Given high reviews, this film is sure to be a hit for adults and teens.

This film stars a handful of well-known actors: Daniel Day-Lewis, Marion Cotillard, Penélope Cruz, Nicole Kidman, Judi Dench and Kate Hudson.  This musical, directed by Rob Marshall (Chicago) is a drama focused on the life of Guido Contini (Lewis) and his struggle to find a balance between his work and home life, as well as his various relationships. 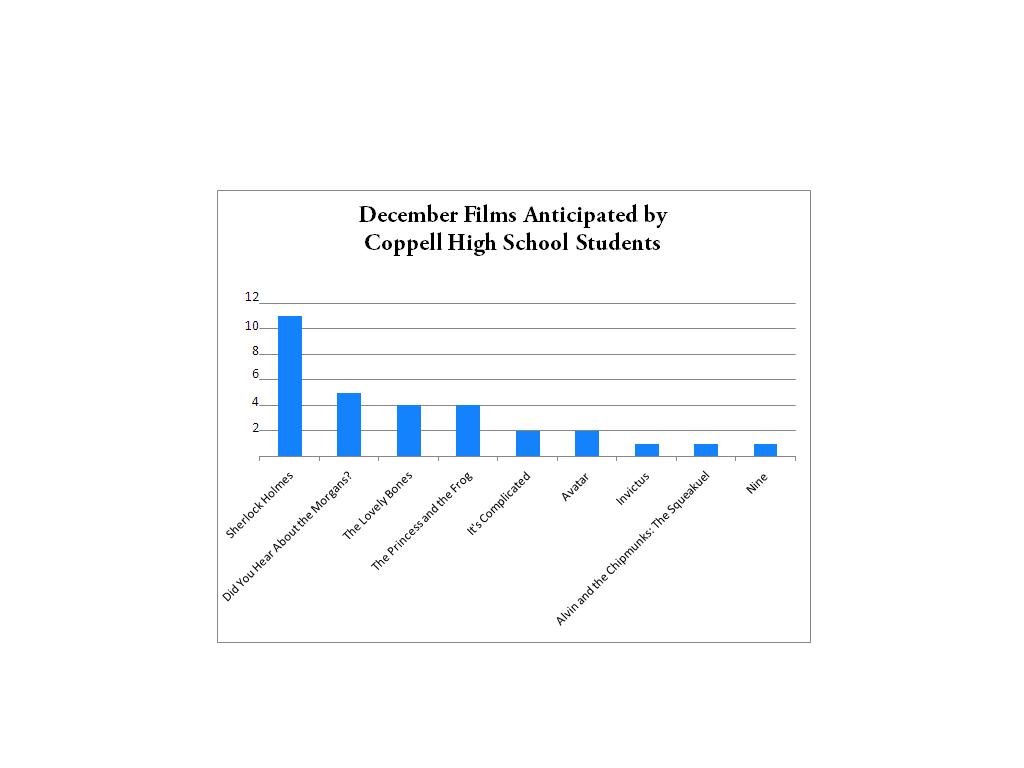