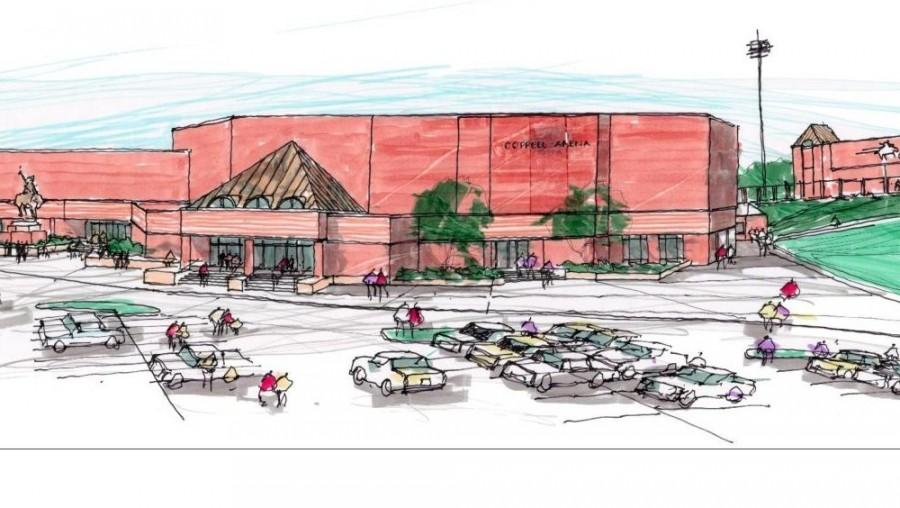 An archiectural sketch of Coppell Arena, a new addition to the Coppell High School campus in the fall of 2016. the arena was part of the bond package that passed in May 2013. Photo courtesy of Sid Grant.

Senior heavyweight and recent state champion wrestler Roger Moe will not be on campus to experience the changes that will come along with the renovation and expansion of Coppell High School’s athletic facilities.

Moe does think that eliminating the boys’ wrestling practices, which took place in two different areas during fourth period this year, will be good for the team.

The wrestling team is not the only program on campus that will be going through a period of spatial transition. After the Coppell Independent School District  put the $79.5 million bond package up for election and passed it in May, $27.1 million were allocated for the expansion and improvement of CHS main campus and auxiliary athletic features.

At the beginning of the process, Coppell ISD athletic director John Crawford did not know quite know what he had stumbled into. Now meeting with contractors, coaches and architects around the clock, he sees a solid plan beginning to come to fruition.

“It’s been quite an extensive process,” Crawford said. “I’ve had numerous meetings with the architectural firm that the school district uses [SHW Group Architects]. In conjunction with that, I’ve also had drawings that [SHW] has for us, and have had all of our coaches come in so that they could view especially the facilities that affect their programs.”

These new facilities will provide space for athletic programs like the basketball, wrestling, football and soccer teams, as well as physical education and dance classes.

The most elaborate of the facilities included in this category is a new multi-purpose sports and competition arena, the construction of which is planned to to take 13 months to be ready by the start of the 2016 school year.

The arena will feature 360-degree seating, with a combination of fixed chair-back seats and theater-style seats in the upper bowl and collapsible chair-style seating in the lower bowl.  Bench seating will also be installed on the ends for the primary use of the general student body. In all, the arena will hold almost 2,600 loyal Coppell fans.

The increase in gym capacity will hopefully also resolve the issue of mutually exclusive school assemblies and pep rallies. This may mean that the days of indoor pep rallies without freshmen are numbered.

“Since it will be able to seat almost 2,600 students, and if you consider the number of people that you can actually have down on the floor, then we would be able to have assemblies, pep rallies, different events where we could have the entire student body there and not have to leave the freshmen in class,” Crawford said.

This layout is equivalent in size and structure to stadiums at many other of the areas’ top sports programs, such as Southlake Carroll, Allen and Plano system schools. The upgrade to the athletic facilities keeps Coppell sports in the conversation among the high school sports world.

“Coach Crawford wants the gym and locker rooms and all those other different kinds of things that go along with that so that our sports have those advantages that just about everybody else around us has and we can remain competitive,” CHS principal Mike Jasso said. “As they began going to different districts that are similar in size, we saw that we were lacking in facilities and so after reviewing all those kinds of things, they proposed the arena-style competition gym and the expansion of the fieldhouse.”

Though it will not be ready to handle a full game of basketball until a much later date, the prospects of playing in an arena of this quality already has sophomore basketball player KJ Luenser feeling the excitement.

“I was super excited [when they said they were going to be building a new gym],” Luenser said. “We needed a new gym. We’ve had the old one for a long time, and getting a new gym will bring others around to see what it looks like. To be able to play in the new gym is going to be a lot of fun.”

The parent response seems, according to Jasso, initially very supportive and positive about the change.

“In not being a part of the [steering committees], I haven’t not been real in depth with [the parent response],” Jasso said. “The responses I’ve gotten so far have all been positive. Their questions have just been about ‘When is it being built?’, ‘how big will it be?’ in reference to gym and those kind of things.”

Coppell resident Julie Landefeld, whose sons Adam, a senior, and Casey, a freshman, have both been heavily involved in the Coppell basketball program, shares Jasso’s positive outlook.

“Being a basketball parent, basketball definitely gets put on the backburner, so it would be nice to have a better facility,” Ms. Landefeld said. “That would hopefully draw more fans into basketball than what’s been there in the past.”

Other improvements include the re-allocation of the locker rooms and offices connected to the main campus for other purposes, the expansion of the turf room and the addition of a fully-functional dance/performing arts studio.

Moe is disappointed that he and the rest of the class of 2014 will not be able to take advantage of the facility upgrades, but knows it will definitely be highly beneficial for those in the younger ranks of the Coppell athletic program.

“I thought it was all so cool, and then I remembered I was a senior,” Moe said. “I’m glad the underclassman are going to have something great to look forward to in their futures.”