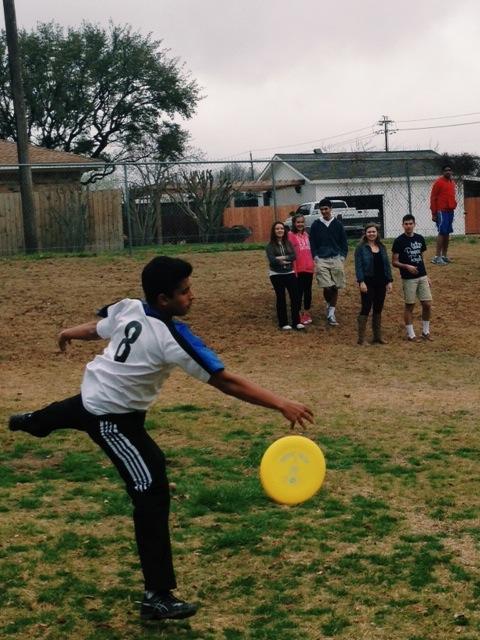 Junior Adhitya Ganesh joins a game of pick up frisbee during the fire escapade. The students were evacuated due to an alert in the girls soccer locker room. Students returned to class safely at 10:45 a.m. Photo by Shannon Wilkinson

Student and teachers were surprised near the start of third period on Thursday when the Coppell High School fire alarm was activated.

Teachers evacuated their students to their assigned fire drill locations outside the building, all of the while students and teachers speculated as they were uninformed of the event causing the alarm.

“Any time something like that happens there’s going to be a lot of confusion, but what was remarkable is how smoothly it went,” CHS principal’s office secretary Carol Green said. “A lot of [assistant principals] were off campus in meetings, but the staff here did really well with what we had.”

An electrical shortage in the girls soccer locker room triggered the alarm although there was no actual fire.

“Normally something will happen and the alarm will get pulled, but we will usually get a call saying it was a mistake but that didn’t happen,” Green said.

The Coppell Fire Department arrived on the scene and students returned to classes after about 25 minutes outside. In the end, no one was hurt and as usual, rumors ran wild.

“The ones that we had on did an amazing job, and we have to give credit to the teachers as well as the students because everyone knew what to do,” Green said. “It’s odd, usually we have a couple teachers call in to ask ‘Is this for real?’ or ‘What’s going on?’ but nobody did that because everyone was really professional and calm.”