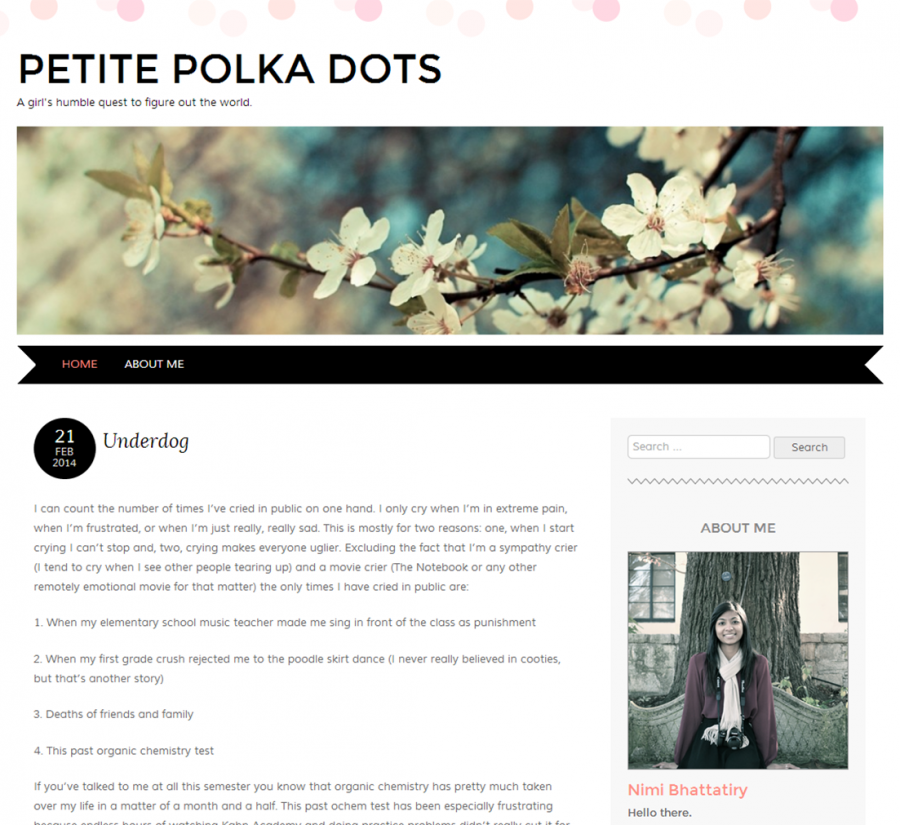 Petitepolkadots.wordpress.com is Nimi Bhattatiry's blog. She graduated from Coppell High School in 2013 and is currently a freshman at UT San Antonio.

With Internet personalities becoming increasingly popular each day, it is no surprise that students in and from Coppell are turning to blogging as a new medium of expression. Many teenagers have been creating blogs and utilizing social media as a means of promotion. Two such blogs are Unprotected Six, a blog created by six 2013 Coppell High School graduates, and Petite Polka Dots, UT-San Antonio freshman Nimi Bhattatiry’s blog.

Unprotected Six is centered around the lives of six students as they venture into and get accustomed to college life. The blog features many enlightening and humorous posts from students Michelle Pitcher, Sam Frederick, Katie Sandfort, Mason Adams, Addy Buigas-Lopez and Ben Cowlishaw. For these students, location is no boundary, as one of them goes to college in California, while another has made Florida her home. College and humor are common grounds to blog about for the students, with Pitcher’s bio description stating that she will “probably major in communications or something like that because she’s too lazy to learn any real marketable skills”.

Cowlishaw first started a blog to document a visit to the 9/11 memorial in New York. After posting several more times to this blog, named Fake Plastic Ben after a Radiohead song, Cowlishaw decided he wanted to have a blog with a group of regular writers.

Since it first became a blog in October 2013, Unprotected Six has received over 13,700 hits from 44 countries.

“The feedback we’ve gotten has been great,” Cowlishaw said. “Getting random messages from people I haven’t talked to in ages or seen since high school saying they love our site is always really cool.”

Cowlishaw, a former Sidekick staff writer and son of The Dallas Morning News sports columnist Tim Cowlishaw, says it is beneficial to have a “target subject” or theme that helps loosely tie all of the posts together.

“For us, that’s been changes in perspective that going to college has brought for us, and occasional childish puns. You have to do everything you can to promote your posts, and also don’t be afraid of criticism,” Cowlishaw said.

When the site first went up, Unprotected Six received comments that the content was great, but the site itself was a little bland.

“Near the start of the new year I rebuilt the site again,” Cowlishaw said.

“Most of our own hits come from social media. You can’t be hesitant to post your own content if you want to get hits,” Cowlishaw said.

Coppell High School 2013 graduate Nimi Bhattatiry is a novice blogger who claims the experience so far has been a fulfilling one. Bhattatiry is a part of UTSA’s seven year pre-med program, FAME (Facilitated Acceptance to Medical Education). Her blog consists of life as a pre-med student and internet trend revelations.

“One of my biggest worries when I first started was that I wouldn’t be inspired to write about anything worthwhile, but I think random posts here and there help me sort out things when I’ve had something on my mind. The responses have been awesome,” Bhattatiry said.

Bhattatiry keeps her Twitter followers updated with her blog posts, and says that her friends have all been encouraging.

“Posting my blog to social media was actually one of the things I was most hesitant about when I first started,” Bhattatiry said. “Seeing as most of my Twitter followers are my friends back from high school, I saw sharing my blog as an opportunity to show people a side of me that a lot of them probably didn’t know.”

Bhattatiry, who says she is a very shy person, thinks writing words down and making them into blog posts is the best way for someone who does not openly share their thoughts with others to communicate ideas.

Benefits of blogging online are immense and varied. For one, students, especially more introverted ones, find that writing is a much easier way of expressing themselves. Further, those who wish to remain anonymous can do so on the Internet.

Another benefit of blogging is writers now have a far larger platform to make their voice heard. Through blogging, writers in Coppell can capture the interest of blog enthusiasts across the nation and sometimes even the world. For these college students, blogging has become not only a hobby, but an active source of relief, entertainment and knowledge.

“Whether you get five hits or 5,000 a day, respect your own work and others,” Cowlishaw said. “Once people discover how great it is to have an outlet for writing it is easy to want to get in on it too.”