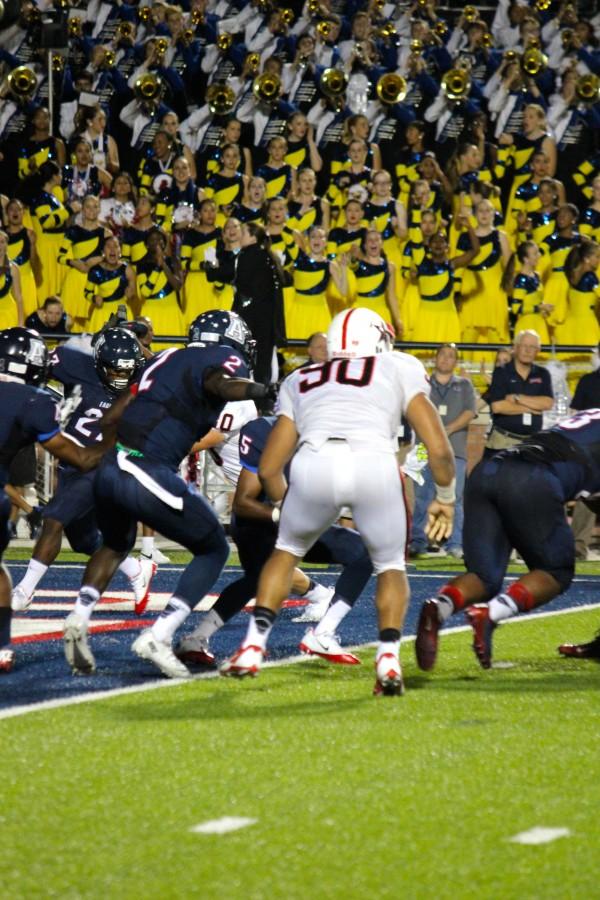 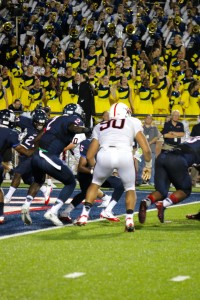 With students from both schools taking to Twitter to discuss one of the most anticipated games of the season, Friday night determined who would come out on top.  Sadly, the Allen Eagles got the best of the Coppell Cowboys, 31-10.

The first play of the game set the tone for what would be a difficult night for Coppell. After the kick off, the team fumbled and the Eagles recovered the ball inside the Cowboys twenty-five yard line. Allen could only muster up a twenty-six yard field goal after the Coppell defense stopped them on third down.

“We just started bad, the fumble and other things, we didn’t put our best foot forward,” coach Joe McBride said. “If you start like we did in the first quarter you’re not going to win any games.

Including the field goal, Allen scored on its first three possessions. One was a 39-yard strike from senior quarterback Kyler Murray to senior receiver Josh Pettijohn. Senior running back Tay Evans scored on a six yard scramble for the other.

“[Murray] is good. He can run and throw the ball too. He can do everything,” senior defensive lineman John Herubin said. “He really did not get a ton of rushing yards tonight, we did a good job containing him, but he did get some big pass plays.”

Coppell’s offense was stalled in the first quarter only reaching the red zone at the end of the first. Going into the second quarter Allen was up 17-0 over the Cowboys.

Senior kicker Adam Centers then missed a twenty-nine yard field goal attempt, and Murray and the Eagle offense took possession at the Allen twenty yard line. After a big play through the air, Evans rushed for his second score of the night on a one yard push.

The score now stood at 24-0 with a little over seven minutes left in the first half.

The Cowboys finally caught a break, when Murray fumbled and Coppell’s defense recovered the ball. Senior running back Gavin McDaniel and junior running back Charles West then marched the team downfield before the team was stopped. Centers, then booted a fifty-two yard field goal to put Coppell on the board.

Each team had three and out possessions to end the half. Allen led the Cowboys 24-3.

Junior quarterback Skyler Bonneau struggled during the game to find open receivers and was the victim of a fierce Allen pass rush. On the first possession of the half, the Eagles intercepted Bonneau. He finished the night with sixty-nine yards through the air.

Murray was the only player to score in a relatively quiet third quarter. off a three yard scramble to the left side of the field. Allen was up 31-3 going into the fourth.

One thing Coppell is known for is not giving up on the play or the game. With the mentality that they were still in the game, McDaniel punched in a two yard run after a lengthy drive by the Cowboys.

“We were behind the whole game, but we had to use the rest of the game to get better, which we did in the second half in my opinion,” Herubin said.

By this time Allen had their backups in the game. Quarterback Ryan Hoogerwerf, who came in for Murray, was intercepted by Coppell defensive back Mark Teffeteller. Coincidently, sophomore Myles Paschal went in for Bonneau on the last drive.

The game ended after Paschal was sacked and along with it Coppell’s undefeated record. The team is already focused on their next opponent, the Hebron Hawks. With a bye week coming up, the players are looking forward to correcting the mishaps from the game and focus on the rest of the season.

“We have to be more physical and stop those deep passes. We need to get a better pass rush on defense,” Herubin said. “We have a bye week, so that is great for us. We get to build on everything we learned in this game.”