Centers tees up Under Armour invite 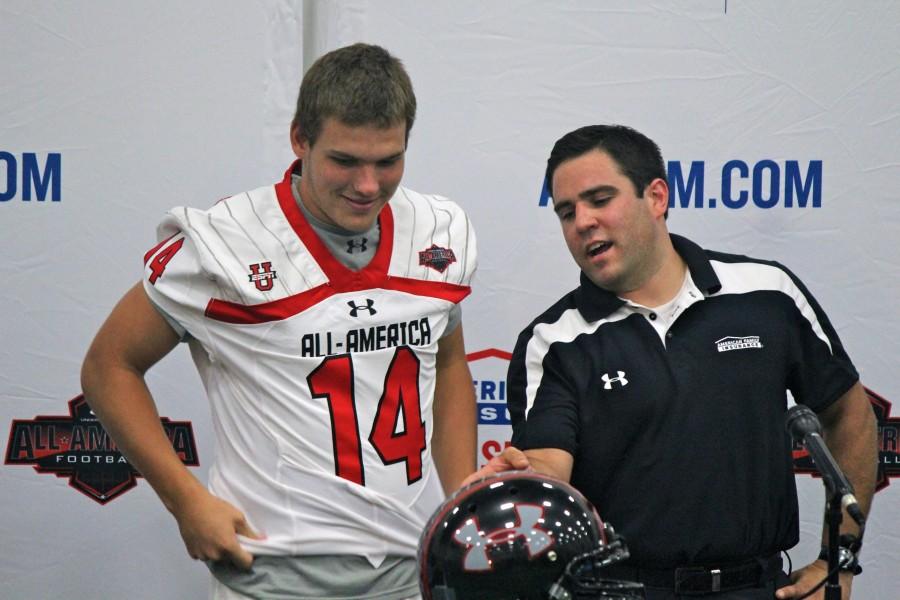 Senior place kicker Adam Centers will don a new jersey this spring, but he will still wear the same white, black and Cowboy red on gameday.

Centers was recognized at a short ceremony that recognized the senior’s selection and invitation to the 2014 Under Armour All-American Game on Tuesday night. The invitation was part of a skills competition in Wisconsin in July, from which Centers took home the spoils in the form of his invitation to play in the game.

Center’s selection cemented his status as one of the nation’s top 90 high school seniors who are selected annually to play in this game.

The special teams leader is the second CHS player to receive an award of this magnitude. CHS 2011 graduate and current Texas sophomore kicker Nick Jordan was selected to play in the U.S. Army All-American Bowl.

These events also help on the recruiting front. The college football landscape is littered with players that have played in All-American games or their equivalent and who have been big contributors at big-time programs.

“I would assume that it would give me a little bit more publicity,” Centers said. “ Coaches hear things, they watch the game, they see my name and probably pay more attention to me.”

For Connie and B.J Centers, Adam’s mother and father, their son’s journey to this point has been amazing to watch in their eyes.

“He kicked the soccer ball against the side of the house for hours and hours and hours,” Connie Centers said. “Just watching him take that from the soccer field to the football field, it has been incredibly satisfying to watch him grow in the way he has and become a nice young man.”

Not only will Centers be kicking his way into the college game, but he will also be able to say that he played on the same field as today’s NFL superstars.

“To follow in the footsteps of guys like [Julio Jones, AJ Greene and Trent Richardson] makes me feel like I can be one of those guys one day,” Centers said. “It gives me a lot of hope.”

The game itself, presented by American Family Insurance, is set to kick off at 4 p.m. ET Jan. 2 at Tropicana Field in St. Petersburg, Fla., and will be nationally televised on ESPN. Players also compete in a skills challenge that will take place at Disney’s Wide World of Sports Complex in the week leading up to the game.