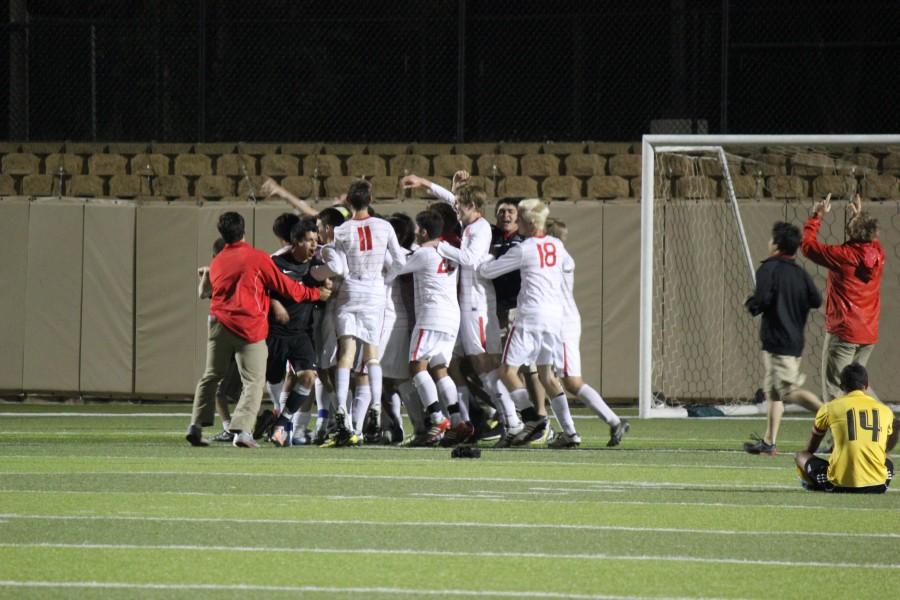 The Coppell Cowboys Soccer team celebrates after winning the 5A State Championship in overtime. Photo by Susie Shahsavari

GEORGETOWN – The ball, off the foot of junior forward Chris Madden, curved into the goal with 56 seconds left in the second overtime, and the Coppell Cowboys walked out of Birkelbach Stadium as the newest Class 5A state champions.

“It has not really sunk in yet,” Madden said. “Kellen [Reid] and I were talking before the game how we were shocked we were even here. It is just awesome.”

Madden scored both the game-tying and game-winning goals in the Cowboys 3-2 double overtime victory against Brownsville Hanna on Saturday in the Class 5A state championship. Senior captain and midfielder Drake Lovelady also added a first half score.

Early on, the Cowboys continued to attack the Eagle defense relentlessly. As they had against Kingwood in Friday’s state semifinal, the ball stayed mostly on the Eagle side of the field.

This early offensive press led to the first goal of the game by Lovelady in the 17th minute. The score marked the second for the senior duo of Lovelady and Mitchell Parnell. Lovelady had assisted on Parnell’s 15-yard strike in the 64th minute of the 2-0 win over Kingwood.

Coppell took a 1-0 lead on Saturday to halftime, and continued its push into the 55th minute. That was when Hanna took control.

Hanna senior midfielder Carlos Acevedo scored two goals, one off a penalty kick and the other a header, in a span of four minutes to give the Eagles a 2-1 lead.

The two teams then continued to jostle with each other for possession of the ball. Physicality, which had come into play more so in the second half than the first, began to take its toll on both teams.

After a hard foul on the Eagles, Madden stepped up to take a free kick 20 yards from the goal, with desperation hanging in the air, in the 77th minute.

“We knew how special he was a player,” Rakestraw said. “Putting him in the back was a little different for him, but he handled himself well, as we saw tonight.”

Madden’s kick found the back of the net, and the Coppell sideline, players and fans alike, erupted.

The junior’s last chance goal breathed new life into the Cowboys, who headed into the first overtime period with a full head of steam.

Both teams struggled to a stalemate in the first overtime. There were some exciting moments, but the ball could not find the net.

In the second overtime, Coppell exchanged goalkeepers, transitioning from senior Dante DiCiolli to senior Dustin Hodges. This was a move the Cowboys had executed throughout the regular season to keep DiCiolli fresh for a penalty shoot out.

But the hero in this game was Madden. The state tournament’s Class 5A Most Valuable Player nailed another goal, again from 20 yards out and 56 seconds left to play, to give Coppell a 3-2 win and state title.

“I was just thinking, ‘We are not taking this to [penalty kicks]’,” Madden said. “We trust Dante so much, but we wanted to end [the game] there and now.”

The Eagles had a chance on a corner kick with time dwindling, but Madden cleared the ball as the final seconds ticked off the clock.

For the 14 seniors on this team, most who have played two or three years as a Coppell Cowboy, the celebration was surreal.

“It is the most emotional feeling in the world,” Lovelady said. “There are so many incredible emotions. The jubilation is going to win out right now, but there will be tears shed tonight, for sure.”