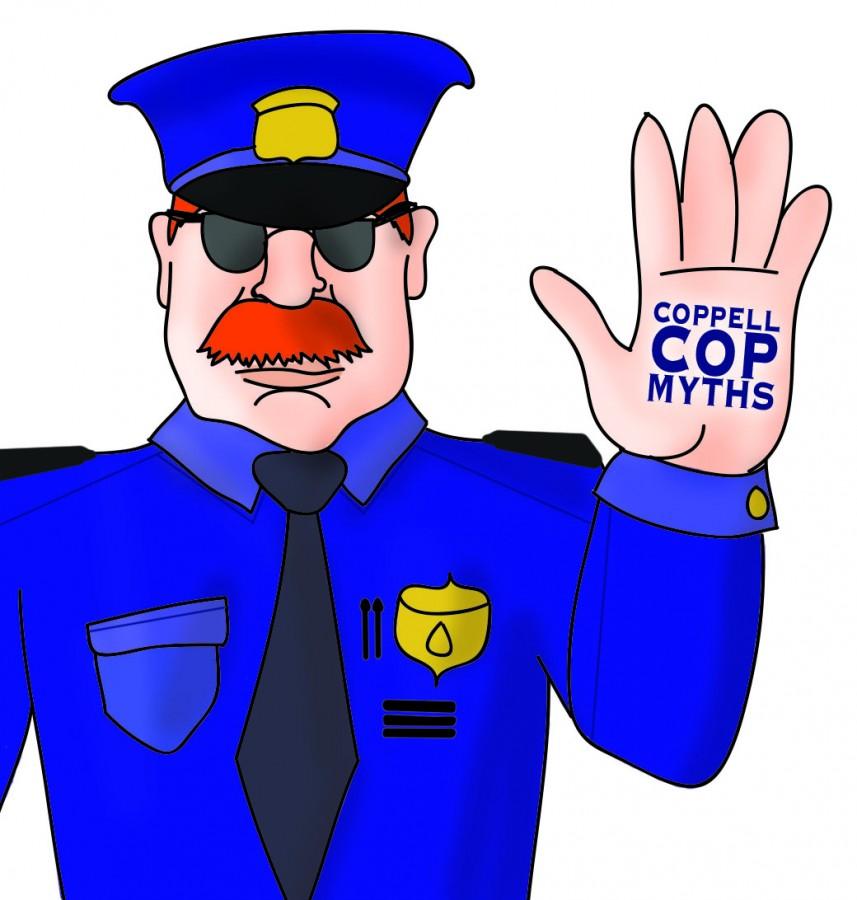 Delicate snowflakes float down from the dark winter sky and snow has accumulated on the streets as uniformed officers push through the slush. Their breath is visible as they check the call box for any reports. Up north in colder states foot cops were forced to brace the cold nightly in order to protect the city.

To escape the cold, the officers take shelter in the only establishment open early in the morning-the donut shop. They are greeted with a rush of warm air laced with the smell of warm and fresh pastries as they open the door as a means to escape the cold.

Thus, the misconception of cops and their donuts was created, since then multiple myths have been formed at the expense of police officers, especially those who patrol in Coppell.

Just one bad experience with an officer can influence anyone’s perception of the police. These people then make snide comments at the expense of cops, which create misapprehensions that seem accurate to those who do not know the truth.

In Coppell specifically, teenagers are under the delusion of many fabricated facts spread by uninformed teens with a grudge against the police. Examples of the myths spread include monthly quotas for tickets, parents being allowed to supply alcohol to minors and school cops not having the same authority as street cops.

Cops in Coppell, especially at Coppell High School, are there to help-and not to make someone’s life more difficult with a ticket.

“About 90 percent of mass shootings happen at schools or college campuses,” resource officer Rachael Freeman said. “The first person they take out is the cop at the door.”

The officers on campus are the only thing standing between students and potential threats. It is their job to protect the kids in the school and prevent crimes. Without a cop at the high school, it would be much less safe and more chaotic, and there would be no one to break up fights and assaults.

There are two cops on campus, officers Freeman and Ricky Jimenez who have designated their time to the protection of students. They are the ones who would put their life on the line in order to save the students here.

Senior Jenny Quinn gained insight into the life of officers during a police academy held in Coppell. She learned valuable skills such as self-defense and investigation. She also learned more about the cops themselves.

“The police academy helped show cops are people too,” Quinn said. “I got to hang out with them and it was fun; cops aren’t evil people they are normal people in a police uniform.”

It all goes back to each person’s individual experience with an officer. If they had a pleasant one like Quinn’s they are more likely to appreciate the cops for the job the cops do. However, if it is negative they are likely the ones to spread the fallacies.

Officers use discretion when it comes to some arrests. If they bust a party with alcohol, they will use discretion to see which teenagers were actually drinking and which were not. They are not out to get anyone and in fact try to help out instead of punish.

Recently, Freeman pulled over a KCBY student who had a phone out in a school zone, and instead of initiating a ticket, Freeman is having her film a segment for the next KCBY about texting in a school zone instead.

“We can make an impact by the way we treat the people we stop,” Jimenez said. “If we give them a positive experience, we treat them well, and they’ll know not all police are jerks.”

The officers in Coppell are not out to get anyone, no matter what rumors spread about cops looking for student stickers after curfew or bringing drug dogs to school whenever they feel like.

Students will not get pulled over unless they are breaking the law, it has nothing to do with the sticker and the cops on campus have no control over the days the drug dogs come, the administration is in charge of that.

If there are any other misconceptions, the best way to find out if they are true or not is to ask a cop personally instead of going by what someone else says. All it takes is an open mind and understanding to realize that the police are not the enemy.

“Through having a positive experience with the police, we are providing that service in a positive way,” Jimenez said. “It is the best way for the public to have a better perception of police and the positive outlook will erase the negative effects they had in the past and the negative image.”