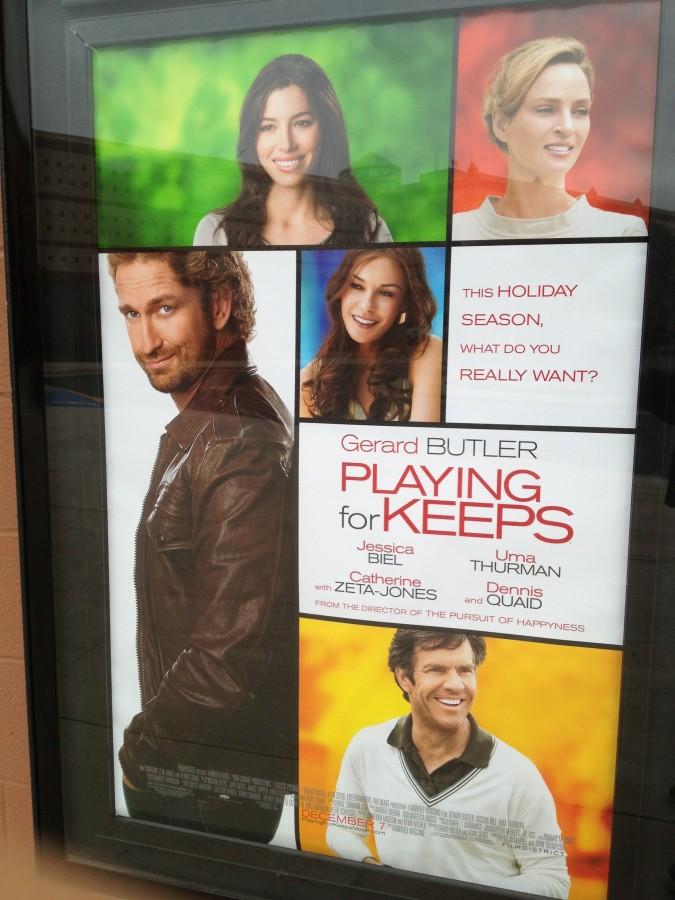 Playing for Keeps stars Gerard Butler as a former soccer star, George Dryer, who moves to Virginia in order to reconnect with his 9-year-old son Lewis. While attempting to redeem himself in the eyes of his ex-wife (Jessica Biel), Dryer is pushed into coaching Lewis’s soccer team and immediately attracts the attention of several lonely soccer moms.

The audience is supposed to relate to Dryer and his problems. But most people would find it difficult to relate to a man whose main problems happen to be the soccer moms seducing him. He drives a Ferrari for over half the movie, because a stranger let him borrow it. This is where the movie loses believability.

Dennis Quaid is completely miscast as Carl a father of one of the players on Dryer’s team. His wife (Uma Thurman) is one of the many vying for Dryer’s affection. Carl hires men to follow his wife around to ensure she remains faithful, while he is not faithful. Quaid hits a low point in this movie. I have to say he is too old and too mature for this role. He seems inebriated throughout his entire performance. Watching Quaid play a paranoid, womanizing husband is similar to watching your parents dance to modern music. It does not make sense, and you are embarrassed to be there.

Catherine Zeta-Jones plays Denise, a mother who uses her connections at ESPN to get closer to Dryer. Zeta-Jones makes the character very aggressive in her efforts, but it also makes her character look very corny.

Iqbal Theba plays Dryer’s Middle Eastern landlord who is mostly trying to get rent from Dryer. Theba is the funniest part of this movie, but he should not be. His character might only have six or seven lines, but half of those were funnier than a vast majority of this movie.

Playing for Keeps is all too familiar for a romantic comedy. There is absolutely nothing in it that has not been done before, so there is nothing memorable about it. One could completely forget the plot and characters of this movie on the car ride home.

The movie spends 10 minutes trying to make its audience laugh, fails and then crams a very predictable romance down their throats. The film spends a lot of time trying to connect the audience to the father-son relationship, but it never really clicks. I would not even call it a romantic comedy. There is no legitimate romance until the last 15 minutes of the movie, and the comedy is fool’s gold.

The movie itself is very scattered and unfocused. It is difficult to determine what the purpose was when the movie changes themes so often. It could be about a father trying to get closer to his son or it could also be about a father trying to get back with his wife. But the movie is advertised as a man having multiple affairs while coaching a soccer team. All of the affairs take place in a 24-hour period, and there are not very many of them. Soccer has nothing to do with this movie outside of a few scenes with Butler kicking a ball around. The filmmakers could have switched soccer out with basketball, football or baseball and it would not have made a difference.’s gold.

The relationship between Dryer and his son is a roller coaster throughout the movie. It is heartwarming to see the two of them bond and to watch Dryer slowly regain his son’s love, but every turning point in the relationship is incredibly predictable. In the first 20 minutes of the film, one might be able to guess how the movie ends with ease.

In some films, there are many moments where the viewers ask themselves “Was I supposed to laugh there?” and if they have to ask that, they should not be watching those films. Playing for Keeps has a surplus of these moments. From awkward laughing to a neurotic crying soccer mom, the movie is filled to the brim with jokes that never quite hit.

Butler has been in a bit of a slump in recent years. I still believe he is a good actor, but he needs to pick his roles more carefully than throwing a dart at a list. He looks as miserable in this movie as the audience watching it with me in the theater. In the end, Playing for Keeps is a mediocre copy of another romantic comedy with a sports player. It is easy to predict, and even easier to forget. I cannot recommend you see this movie, because I guarantee you will enjoy something else more. 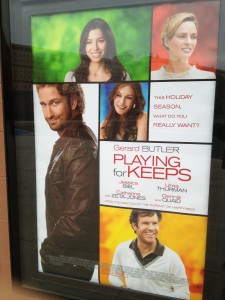