Old Town Coppell to catch up with times 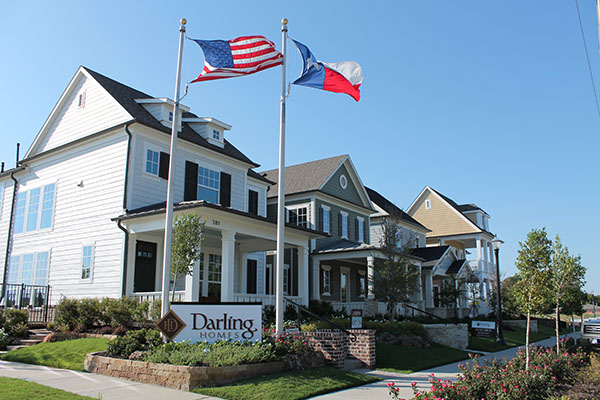 The new residential homes, built by "Darling Homes", are one of the first parts of the Old Town Coppell development to break ground. Photo by Mia Ford.

A general store, barber shop and some railroad tracks were all that made up the City of Coppell in the early 1900s. Since then, sprouted up around what is now referred to as Old Town Coppell

As new retail developments and residential districts popped up around the city, Old Town slowly became less and less important. In 2011, city officials decided it was time for the area to get a facelift.

Currently, the Old Town Coppell area is marked by orange cones and detour signs as the area undergoes transformation from a faded historical district to a bubbling retail and community metropolis.

The City of Coppell planning department, and City Council have approved restaurants, parks, residential and office sites to be built off of Main Street. The center of the plan includes a park area, with a historic-themed playground, open areas for picnics or gatherings, and an interactive, run through fountain.

Coppell resident Greg Hulcy is eager for the project to be completed, as it will likely be a central place for his family to spend time.

“The most important aspect of this project is density,” Hulcy said. “From the way the project sounds, we will be able to park and walk from place to place. Maybe grab ice cream, shop around and visit the park all in one visit.”

Surrounding the 1.5 acre park area will be cottage-style office buildings, 44 patio homes designed by Darling Homes and restaurant plots. Residents are already eagerly waiting for the project to take off, as 16 homes have been sold, numerous office spaces, and even a restaurant.

“The style of the development is pre-World War II Texas, and will mix modern amenities with the history of the area,” local real estate broker Greg Yancey said. “The area will include the popular Farmer’s Market and is intended to complement the area, not trying to replace the Old Town district.”

Yancey, who lived in Coppell for 17 years, created www.mainstreetcoppell.com for the development. On this site, architectural renderings, progress and photos can all be accessed by anyone interested in the project.

Coppell’s own Local Diner is relocating to the Old Town area, and the popular diner will be only one of the restaurants opening in the new zone. The restaurant may be completed as early as May 2013.

Driving through the area, its hard to picture the 17 acre spread as such a lively community gathering spot, but construction is expected to begin early this November, and officials are enthusiastic about the results.

“This new development will give residents more options to socialize, add and old town feel to an area with a much anticipated update,” city planner Matthew Steer said. “It will be Coppell’s first patio restaurant this close to a park, and will offer a lot to Coppell’s many families.”

The process of approval required many steps, since it was proposed by Coppell Resident, Charles Cotton. After hiring an architect, the planning department worked with outside companies to draft and eventually propose their plans to the Planning and Zoning Department and then the City Council, where residents were invited to view the architects’ concept plan.

Such a drastic change to the area would usually spark controversy, especially in a historical area, but Steer said the project has been met with little resistance.

“Overall, the City Council and Coppell residents have been very supportive of the change,” Steer said. “Small oppositions have been stated, especially to the neon signed [planned for placement at the entry structure to the area], but nothing major has stopped us yet.”

The project will have many benefits, including creating Coppell’s first community area with such a diverse blend of amenities, ranging from food, to retail, to business, to play.

“The area will be a nucleus for Coppell,” Yancey said. “The area around the zone will hopefully spring from the center.”

Not only this, Main Street Coppell will provide an area with food and other services to the office areas in northwest Coppell. The area will also bring forward tax benefits for the city, alongside what the area brings to Coppell’s social scene.

“We anticipate the area will be a huge success based on the demographics of Coppell,” Yancey said. “Coppell has a huge daytime population and sense of community that will thrive in this area.”

Though construction is expected to begin in early November, and take off in early December, the project is not expected to be completed until 2015 at the earliest.

Should the project be completed in 2015, Hulcy’s twin sixth graders will be in high school.

“The central area would hopefully be a place I would be comfortable dropping them off,” said Hulcy. “I would not be as comfortable with them hanging out at malls and movie theaters as I would be with them spending time with their friends here in Coppell.”