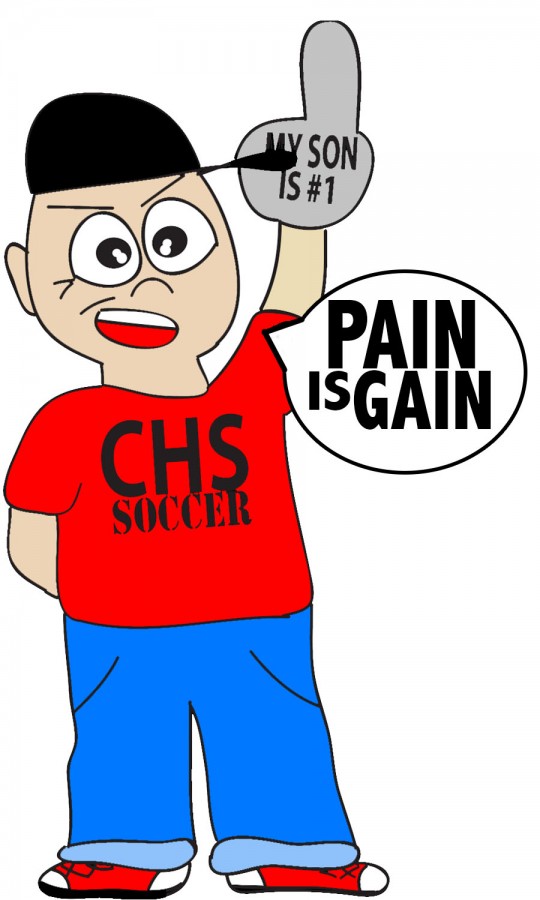 The crowd is going wild in the stands, and everything you do incites a reaction. You hear your coach and your parents screaming at you.

Everything in that moment seems to drag on. Any mistake you make could mean the whole difference between name recognition and anonymity.

Welcome to the life of the nation’s top high school athletes.

The odds are unfavorable for playing college sports. Only three to sevenpercent of students go on to play their sport in college. Even fewer students move on to contend in a professional league – only around one percent in each sport. Needless to say, playing top level sports is a competitive business.

An infinite number of factors go into a successful athlete, but in the life of many athletes, one of the most significant factors are the parents behind them.

Parents are largely influential to a young athlete and to many the support and sacrifice that their parents show seems to be what keeps them motivated.

“My dad went to every single match and tournament; he would stand there and watch me play [tennis] in the sun, even if all the other parents were sitting down in the shade. He would always say ‘if she in [the sun], then I’ll stand in it too,” senior varsity tennis player Abby White said.

White has been ranked No. 1 on the varsity team since her sophomore year and plans to play college tennis.

Junior defensive end Solomon Thomas is one of the many top tier high school athletes in Coppell. He is ranked as the No. 3 recruiting prospect in the state and nation in his position as a defensive lineman and 24th in the nation in football overall (according Scout.com).

He has received scholarship offers from Division I schools such as UCLA, Stanford, Texas, Notre Dame and Alabama. And like many athletes, he has two parents who are very involved.

“We make sure to keep [Solomon] grounded and not involved in all the hoopla,” dad Chris Thomas said. “He needs to go home and be able to not think about college and where he is going to commit, and keep him insulated from all the excitement.”

Another thing parents do aside from support and provide respite from all of the recruiting craziness is that they make sure that their son or daughter becomes a respectable person as well.

“We want to keep him real and humble,” mom Martha Thomas said. “[Solomon] has many great aspects to him; people always want to know about football, but that is only one great aspect of him.”

Senior Sarah Agnew is another competitive athlete who recently placed second in a national sand volleyball tournament and, like Thomas,  has offers from Division I schools such as Georgia State, Mercer and University of North Florida.

“It is my responsibility to support, encourage [Sarah’s] passion, nurture and protect Sarah,” mom Dana Agnew said. “It means finding the time to drive her to practices [when she was younger] or go to her tournaments and games, which is a big time commitment. It is also to truly love her and make sure that she is healthy.”

In the midst of recruiting and athletics in high school, the parent’s role generally is to support them, make sure they are doing all right, and mostly, be willing and able to devote the time that it takes to go on the competitive, exciting journey with their young athletes.

However, the role of the parent changes throughout the athlete’s life. During early childhood, many parents put their kids into sports for fun and socialization. Most parents do not know if they are about to start the long and arduous journey of a high level athlete.

“It’s hard to tell what kids want to do because they are so young,” Joe Foster, coach of Coppell Cowboys Select Under 9 baseball team, said. “I rarely hear of kids wanting to play at higher levels at this point. My goal right now is just to help them become better players than they were when they first joined.”

Even so, there is a general trend in the competitive athletes of today. The large majority had parents who had put them in sports at a really young age. It didn’t matter what sport, and many times it is not the sport that they end up excelling and pursuing a high level of competition at.

But, they were exposed to the athletic world at a young age. For example, Thomas began swim lessons at age 3; Agnew  start play a sport at age 3; White began gymnastics at age 5.

This being said, rather than just the support needed at the high school level of play, at younger ages, a push is needed.

After the push, it is then the child’s decision and own motivation to pursue a certain sport- most of the time.

“There are parents who try to live through their kids. I’ve seen some parents who just get way too competitive, like in daddy ball, where the dads are just on the side being vocal and coaching the team from the bleachers,” Mr. Thomas said.

Some parents who go into the process thinking about making their kids successful athletes are going to push harder and be less alright with their kids’ decisions to focus on something else.

The Thomas family even recalls a situation where a Dallas soccer team had parents who became angered by the coach for not playing their kids enough. The parents then took financial control of the team and fired the coach.

This is an extreme view of sports that does happen. But more often, kids are pushed a healthy amount by their parents.

Parents usually take the major matters into their own hands at the younger ages because kids will not have as great of a view of and perception of what their actions will cause as the parent will.

“There were times when I didn’t want to practice, times when I just lost a match and was having a bad time…my parents are the ones who keep pushing me forward. They tell me to keep going and do my best. They say things like “this is normal, this happens to every athlete,” White said.

In addition to taking matters into their own hands, level of play is something parents are able to control as well.

“We were losing dozens of kids to select and club teams. We had a drastic decrease in kids involved in our baseball association,” Coppell Baseball Association President Kevin Marsh said.

What is interesting about this situation is that these teams that he was talking about consist of young kids who were put into the more competitive teams by their parents. As a solution, the baseball association has created select teams that Foster is one of the coaches for.

“We have two sessions of tryout that are open to anyone. There is an independent evaluation and a coach’s evaluation; most of these kids have had a lot of experience, a lot of them have been playing since around 6 years old,” Foster says.

Once again it goes to show how often parents sign their kids up for sports at an early age. Through it all, the parents are involved. In the beginning, it is a push and the parents’ initiative, but as the journey leads onward, the parents start to take footsteps back to be seen as figures to be seen as support and help.

They take their athlete to practices and go to their games. They sacrifice their own time and desires to help their children succeed.

A couple of strides later, they can be the much needed assistance in the recruiting and career process, searching stats on such a job or just help to provide a timeout from all that goes on through the day.