Gun control is not the solution, Hair says 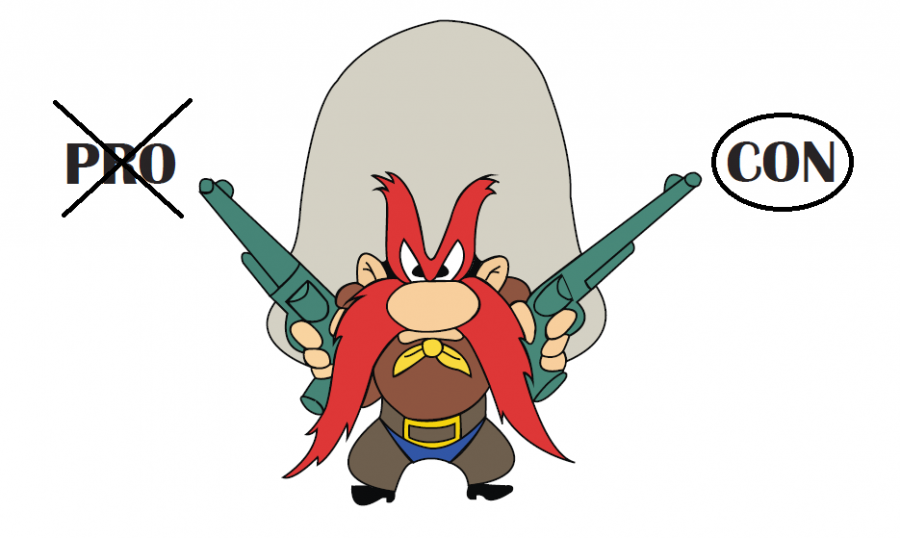 The rush of recent shootings have divided the nation's opinion on gun rights. Should the government interfere with the sale of guns in order to prevent future murders? Graphic by Rinu Daniel.

Election campaigning in America and the Olympics Games in London made the months off of school memorable ones, but ultimately, the summer of 2012 was marred by something far more sinister.

Twelve were killed in 58 more were injured when a shooter turned his weapons towards the audience at a premier for The Dark Knight Rises in Aurora, Colo on July 20. Only a few days later, 10 people were shot at a Sikh temple in Wisconsin and seven more in the shooting at Texas A&M. The bloody summer was capped off by a school shooting on the first day of class in Ohio.

This recent onslaught of firearm violence has given proponents of increased gun control the ammunition to push their cause back to the forefront of national attention.

While each of these incidents was tragic and devastating, tightening the regulation of guns or banning their sale altogether would be an overreaction of cosmic proportions.

Cars and tobacco are responsible for more deaths each year than guns. Should the sale of cars and cigarettes be restricted by the government? If a man falls down the stairs and dies, should we ban stairs?

Aurora was the result of police failing to act on numerous red flags about the killer’s mental health in the weeks leading up to the shooting. The Sikh temple shooting was the result of racial intolerance and blind ignorance. These are the sorts of issues that must be improved upon to prevent future homicides in our communities, not banning or restricting the sale of guns.

Do you want to know what benefit enhanced gun regulation would have? Absolutely none. In fact, it would actually make the job easier for potential murderers. Criminals will get their hands on a gun one way or another. If criminals can’t buy guns legally, they will get them illegally.

Here’s the crux of the matter: the only thing ramping up gun control would do is take guns out of the hands of the victims and ensure that criminals are the only ones with guns.

It is essential that the citizen’s right to bear arms is not infringed upon. If someone in the Aurora movie theater or Sikh Temple had a gun on them for defense, the loss of life could have been greatly reduced.

A survey determined that 40 percent of convicted felons had at one time decided to not commit a violent crime because they suspected that the victim possessed a gun. Seventy percent of felons reported that either they or a peer had at one point been deterred from committing a violent crime by a citizen who shot at them or wounded them.

Heightened gun control would prevent citizens from taking such actions – actions to defend themselves. Don’t just take the criminals’ word for it. Gun control has been proven to backfire and result in an increase in crime.

In 1976, Washington D.C. passed a law prohibiting its citizens from possessing handguns. While this law was in effect, the city’s murder rate averaged 73 percent higher than it did before – despite the national average decreasing by 11 percent during this time. Similar situations in Chicago and other cities have proven that gun control laws have catastrophic and unintended consequences.

The 1976 Gun Control Law in Washington D.C. was struck down as unconstitutional in 2008. Denying citizens the right to own a gun is paramount to tyrannical. It goes directly against the Second Amendment of the Constitution, which guarantees the people’s right “to keep and bear arms”.

That isn’t the only lesson history can teach us about the negative consequences of a gun ban.

If a law were passed in 2012 that restricted the purchase of guns, it would follow a very similar path to the government’s attempt to prohibit alcohol in the 1920s. It would lead to a sprawling black market to support the undiminished demand for guns – people will still feel the need for weapons to defend themself.

And just like with alcohol in the 1920s, this black market will lead to a huge spike in organized crime, and – you guessed it – more risk of homicide.

Terrible people used guns to do terrible things this summer. Though I understand the need to act now to prevent future atrocities, more gun control is not the solution. We need to address the roots of the problems that cause homicides to occur, not the tool used to commit them.

Want to hear the other side of the story? Check out Kimberly Del Angel’s argument for gun control.