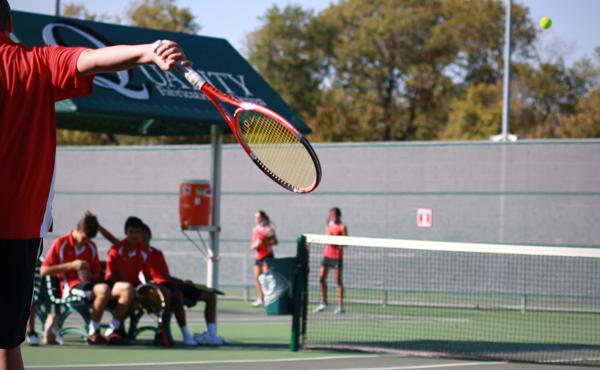 Becoming a tennis coach is not exactly a common choice of job profession for a high school senior. However, one varsity senior tennis player’s dream after graduating comes from the game he loves the most, tennis.

Grayson Vanover attends Coppell High School and is a part of the class of 2012. He began playing tennis as a sixth grader after his P.E. coach saw that Vanover had a natural talent and skill for the game.

He continued pursuing the sport throughout middle school playing for Brookhaven Country Club and also for his school, Coppell Middle School East

Basketball, another passion of Vanover’s, was hard to balance with his new found talents in tennis, but through lessons with coach Jeff Marren, who incorporated basketball similarities into his tennis lessons, Vanover quickly fell in love with the sport and ultimately picked the racket over the ball.

The first years of playing the game were hard for Vanover.

“I wouldn’t have even called myself an average tennis player for the first couple of years,” Vanover said.

Staying persistent and gaining experience from tournaments, meets and lessons from  Marren and later Coach Paul DuToit, Vanover’s ability to learn the game came with hard work and dedication.

“It took a lot of practice to build my skill level when I first started playing the game,” Vanover said.

Vanover’s main source of inspiration though were both Marren and DuToit who taught him not only how to improve his skills, but also how to have a passion for the game.

Both coaches took a special interest on and off the court and really inspired Vanover’s dedication to pursue the game and also to consider going to college to get an associates degree for coaching tennis.

“Coach Marren and DuToit were a big help and inspiration for me growing up as a tennis player; now as I’m moving on to college, I plan on continuing to pursue tennis by becoming a tennis coach by following the “Tennis Tech” program at Tyler Junior College,” Vanover said.

“Grayson is a very compassionate and helpful person. He can relate to both the game and to the people and I think that’s what will make him a successful coach,” Jackson said. “He has the skills to do it, but he also cares enough about the people.”

As a graduate of the program herself, Jackson recommended the program because of the benefits of having a job teaching lessons upon graduating. Jackson also thinks Vanover has what it takes because of his willingness to pursue what he is most passionate about.

“Coaching isn’t about the money, it’s about doing what you love the most and Grayson definitely has a passion to help educate kids about tennis,” Jackson said.

Vanover’s dream of becoming a tennis coach was actually influenced primarily by the relationships he had with Marren, DuToit and Jackson.

“Each coach I’ve had throughout my tennis career has made me the person I am today. Even the sport of tennis fuels my compassion to be a coach,” Vanover said.

“Grayson is very smart, a good leader and relatable. I think that his ability to connect with people would make him a great coach,” Chausse said.

Chausse, who met Vanover in sixth grade while taking lessons at Brookhaven Country Club, maintains a 9-4 overall doubles record with his partner and has recently won first place in a tournament in McKinney.

“On the court he is a fighter and definitely has the skill level to understand all concepts of the game to help educate others,” Chausse said.

Not your average major, but to someone like Vanover, to be happy in life all you need is the willingness to dedicate your efforts into something that fulfills your one true passion.

Vanover hopes to pursue his passion for coaching next year at Tyler Junior College. After two years he will have an associates degree as a tennis coach.

“It’s truly my dream to be a coach and give back to kids just like my coaches did with me,” Vanover said.