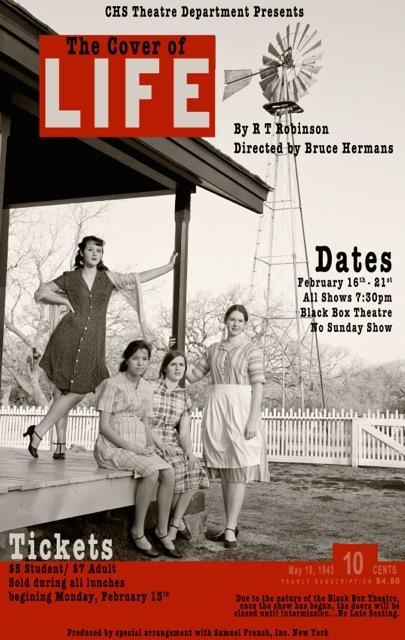 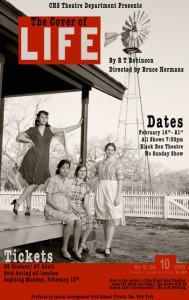 Written by R.T. Robinson and directed by Coppell High School’s Bruce Hermans, “The Cover of Life” tells the story of three brothers who were all sent to fight in the armed services. LIFE Magazine sends a reporter to conduct a cover story on the mother and wives of the brothers and how they live their daily lives during the war.

“I read it about five years ago and it really struck a chord with me,” Hermans said. “I think the themes in the show are very strong, and the play is a very good actress piece. The aspect of what I could do with the show from a directorial and design concept also excited me.”

Set to be performed on Feb.16 through Feb. 21 in the Black Box Theatre, the play includes tragedy, humor and love, which makes it appealing to a wide range of audiences. However, it is noted that the recommended age for viewing is middle school students and up.

“The material is pretty deep as it is a drama, though there is some comedy in it,” Hermans said. “The story is actually based off of semi-true events.”

Starring freshman Christina Burdette as the LIFE reporter, Kate Miller, and Christina Moreno, Paige Albright, Mary Claire Phillips and Jackie Malish as the wives and mother, “The Cover of Life” showcases the transformation of the roles of women in the American society during the 1940s and the challenges the women faced   while   their   loved   ones were fighting for their country.

“There is a really cool plotline with seeing the struggles that the women face with gaining more responsibility and role in society,” Phillips said. “I play Sybil who is one of the wives that stay at home. And through out the play you can see her internal struggles.”

Philips has been a member of CHS Drama for the past two years and is currently an officer for the Drama Club. Phillips says she is excited for the upcoming production as she can closely connect with the characters.

“It is by far my favorite role that I have played,” Phillips said. “The play is very well written and gives the actors and actresses a lot to work with. Mr. Hermans has been an amazing director and we have all had a good time working with him.”

Newcomer to CHS Theatre, Burdette takes on the lead role in the play. Burdette is currently in The Take One theatre class. She has also performed outside of high school theatre in commercials and short films.

“I am extremely excited to be playing Kate,” Burdette said. “She is a fun character to play. In the beginning of the play, she seems to be very well put together and   professional.   Then by the end, she has loosened up and lets her guard down.”

Burdette and the other actors and actress will begin performing “The Cover of Life” on Feb.  16. Tickets are $7 for adults and $5 for students.

“Anyone will enjoy this play,” Burdette said. “If you enjoy history, women’s rights or even journalism, this show would be perfect for you to come see.”