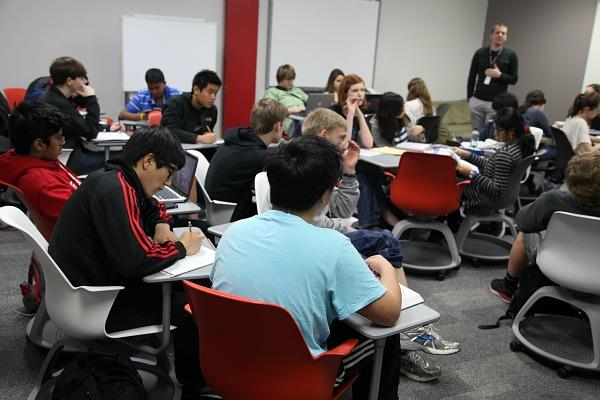 CISD is currently investing into remodeling Coppell High School’s classrooms to create a 21st Century learning experience for it’s students. Mr. Rohloff’s room is one of the few classrooms at CHS that have already been remodeled. The remodeling included the installment of new desks, seats, couches, smart boards, paint for the walls, etc. Photo by Trevor Stiff.

As the world continues to spiral into a more technological and communicative time period, its education systems are taking the liberty of transforming their students into 21st century learners.

In the last 10 years or so, methods of education have changed drastically along with society. Along the way, they have blended in, being masked by the public’s new sense of normalcy.

Top-notch school districts such as Coppell ISD have always been known for their unique opportunities that make for an award-winning learning environment. They accomplish this by providing the optimum experiences to keep up with today’s technology and expectations.

After a decade of attending CISD schools, I have noticed the changes the district has made to prepare students for their future. Ten years ago, “advanced technology” in schools included chunky Dell laptops and using overheads to teach. Fast-forward a decade, and students have access to MacBook Pros and Smart boards in most classrooms. The world is always changing and frequently has new demands. This is where 21st century learning comes in.

The goal of 21st century learning is to utilize today’s technology and discoveries to prepare the students for their future. The world is always changing, and in the transition into the 21st century, there has been a shift in skills that need to be acquired for ones future.

According to p21.org, education systems will see a lot more curricula based on life and career skills, media and technology skills, and the Four C’s: critical thinking, creativity, collaboration and communication. They will also raise the standards for standardized testing, instruction and learning environments. After thinking about these elements of a 21st century learning environment, I realized how many changes CISD has made to the typical school experience in order to fit these qualifications.

CISD is already in the process of implementing many of these elements into its schools through various methods. They have launched Academies for career focuses, incorporated new blended classes into their curriculum, and initiated classroom makeovers that give a more modern feel to the school in order to adapt their class curriculum to develop the Four C’s in their students.

Three years ago, in an attempt to help prepare students interested in media, public services and engineering for their futures, CISD launched the Academies. In these Academies, students are in a smaller, separate learning environment that focuses core and elective curriculum on the career path of the academy.

So far, it appears that these Academies are beneficial to the students who are enrolled in them because of their career-centered classes and opportunities for a hands-on experience. They even allow students to utilize some of today’s top technology in their classrooms.  Students who want to do well in this program do, but the thought of focusing in on one career path scared some off. For those who enjoy the selected career paths, the Academies at CHS are a very good method of education, allowing them to communicate, collaborate and think critically about applying what they learn to what is going on in the real world. They are an overall good experience that will expand into the future.

This year, Coppell High School has piloted a new way of learning called Blended Learning. They have developed new curriculum for core classes that act more as an independent learning environment. This is pretty close to the way New Tech’s curriculum is set up. In them, students spend a total of two or three days in the classroom learning, and the rest of their learning is self-directed through the use of critical thinking. For the 2012-13 school year, there will be a total of four blended classes, and in the future there will most likely be even more.

Students, myself included, are very excited about the idea of taking one of these classes next year and experiencing the direction that learning is going in the 21st century firsthand. Hopefully these classes will be interesting, productive and look good on college applications. It will be interesting to get away from the typical curriculum of a high school class and explore the materials creatively and independently.

For all of my school life, I have sat in standard desks, chairs and tables. Now CISD is looking forward and changing even these things in their schools. There is now a definite look for a 21st century learning environment. There are more colors in classrooms to stimulate the mind, and all furniture looks more modern. These rooms are very eye catching in a typical school.

By next year, CHS alone will have three rooms that have been updated to this new look. One is an environment which elective classes use for collaboration. They will all incorporate different desks, chairs and colors never before seen in a normal classroom environment. Most furniture is made from the same company including the node chairs, which are taking over the standardized desk. These chairs are round, pivot 360 degrees around, and have desks attached to the top of them.

In Brian Rohloff’s history classroom, I have the interesting privilege to sit in them everyday. The chairs prove to be beneficial in organization and position. They have a large basket underneath for student backpacks, which keeps the floor clutter free, and they also have curved backs that allow students to improve their posture. The 360-degree rotation allows students to freely move their chair around in any direction, which proves beneficial when the teacher is talking or you are trying to write notes, and the attached desks rotate to any desired position that is comfortable for the student.

As schools update their looks to have more of a modern feel, they are projected to look like this. Although it is different, it is definitely something that I could get used to.

The future is a scary thing, if you think about it. Not knowing what is coming next or what will become of what you know now. Maybe 10 years from now what I think is normal will be incredibly outdated, and what I think is strange now will be normal; it is just going to look a lot different. Ultimately, moving education into the future will be a good thing for students, preparing them appropriately for their world post-high school. It is just going to take some adjusting and getting used to in between.