Senior vegetarians stand up for a cause 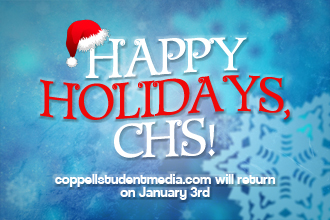 In today’s meat eating world, vegetarians undoubtedly prove themselves as a group of minorities among the rest of the world. The trials and hardships of being a vegetarian are often overlooked, but for three Coppell High School students, vegetarianism stands for more than just a diet.

Senior Cole Eaton has been a vegetarian for over five years. His decision to become a vegetarian happened spontaneously unlike most vegetarians, who find themselves taking the plunge for a specific reason.

“I never really thought about why I became a vegetarian,” Eaton said. “No one in my family was; the decision was just something I made for myself.

Eaton does describe his eating habits as healthier than when he was not on the diet, but unlike meat eaters, vegetarians can have a hard time getting essential vitamins and proteins.

“It’s never been hard for me to get enough protein in my diet,” Eaton said. “I eat all sorts of things that normal people wouldn’t even know had protein.”

Vegetarians can get necessary proteins from things like nuts, fruits, vegetables and a recent popular choice, soy. Doctors and nutritionists have concluded that if eating the right foods, a vegetarian diet can surpass any carnivore diet on a health scale.

Senior Mary Harpel has been on her vegetarian diet for almost two months and started her journey after viewing a PETA video on animal rights.

“It sickened me how animals were being treated for our enjoyment,” Harpel said. “Starting a vegetarian diet allowed me to kill two birds with one stone by becoming healthier and voicing my opinion on the wrongdoings of animals.”

Commitment to a meat free diet is not always easy, especially as a teenager.

Senior Anna Georgakis, who has been practicing vegetarianism for two years, will be the first to admit that kicking a meat eating diet is no walk in the park.

“Within the past two years I have only given in once to eating meat.” Georgakis said. “It’s really hard sometimes, but after going an entire year without it, I think I have finally gotten rid of my cravings.”

As teenagers, most of these vegetarians are tempted multiple times a day. Whether it is walking into the school cafeteria, a fast food joint with friends, or even at home, meat really is everywhere.

“Once you become a vegetarian, you really do realize that meat is consumed every meal for some people,” Harpel said. “It’s hard to pass my favorite restaurant, Steak N’ Shake, without thinking about their famous steak burgers.”

Besides the hardships of vegetarianism, Eaton describes the positives and pride he receives from being a vegetarian.

“I was never really a firm believer that humans were meant to eat animals,” Eaton said. “I think that they were never put on this earth for us to slaughter and mistreat them. Although I am only one person, I think that I do make a difference in the ethical treatment of animals.”

Harpel, who admits to moderately eating fast food before she became a vegetarian, has also seen a positive outlook on her health since cutting out meat from her diet.

“Most of my meat intake was from fast food joints and since cutting out meat, I have noticed myself looking more healthy and overall feeling better just from not eating fast food,” Harpel said.

Besides looking thinner, a recent study done by the National Health and Nutrition Examination Survey, found that vegetarians showed a “lower risk for many disease states including heart disease, diabetes, cancer, and hypertension.”

These benefits are among the many reason why people choose a vegetarian lifestyle. For these three seniors, a vegetarian diet proves as an adequate way of showing their respect for the animals that we so often overlook.