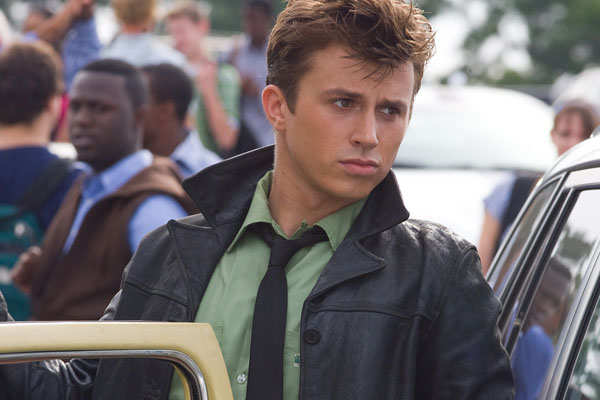 Footloose is a classic 1980s movie combining the story of big-city kid in a small town with the common idea of teenage rebellion.  While the idea was basic, the movie was a hit, and is considered another classic 80’s film, along with films like Pretty in Pink, The Breakfast Club and Sixteen Candles.

Because of its great success, director Craig Brewer decided to take the film’s storyline and make it his own with a 2011 remake of the film that came to theaters Oct. 14.

Most everyone knows the idea of the movie; big city kid, Ren MacCormack moves from the hustle and bustle city of Chicago to a small Western town.  Although he tries to fit in, he can’t get a grip on the brutality of the town’s council who has banned music, drinking and, shockingly, dancing.  In an effort to have fun and win the girl of his dreams, MacCormack faces the council in an effort to get the senior class their own prom.

Kevin Bacon plays MacCormack in the 1984 original, with Kenny Wormald in the lead role in the remake.

With leg warmers, big hair, and synthesized background beats in every song, the 1984 Footloose original has all the qualities of a typical 80’s film.  Watching it now, it is obvious the movie is so outdated it is almost un-enjoyable.  While the story line is fun, and the actors are passionate about their roles, some major scenes are ruined by 80s music thumping in the background and the laughable dancing. With a lot of the details dating back 30 years; the film is distracting due to its age.

Although most of the original film is silly due to the music choices and fashions (especially the long awaited prom scene, which was probably the cheesiest part of the movie), the actors make the movie a lot better than it would have been.  With standout actor Bacon as the lead role, the acting is impressive and believable.  Not only was his acting great, but his dancing is phenomenal.  As proven in his solo dance scene, Bacon can dance, and he can dance well.

Even though the original was a good movie, Brewer decides to change it up to fit the trends of today.  While keeping the script almost exactly the same and the scenes in the movie close to identical, there are few major differences in the remake.  Besides the opening scene being more depressing than the toe-tapping original and the mom being deceased in this remake, most of the film sticks to the original storyline.

The only real changes are the music, which is reworked to be more modern, the fashions, which were definitely different from the 1984 original, and the dancing.

Another noticeable difference was the actors in the film.  Kenny Wormald, who has a lot to live up to, falls just a bit short.  While he is just as charming as Bacon, his acting and dancing were not as phenomenal as in the original.  On the other hand, sidekick, Willard, played by Miles Teller, is a hit.  With hilarious jokes and sarcastic comments, Teller really adds comedy to the film.

Another addition dancer and country singer, Julianne Hough, gives a standout performance as a debut actress.  Although personally, I did not expect much from her, Hough’s acting is passionate and believable, and, of course, her dancing was incredible.

Overall, while both movies are great for their own time, the new Footloose of 2011 appeals to more audiences with improved music, fresh dancing and strong actors.  Brewer’s Footloose is a modern spin on an 80s classic tale of teenage rebellion that is the same, no matter what age you grew up in.